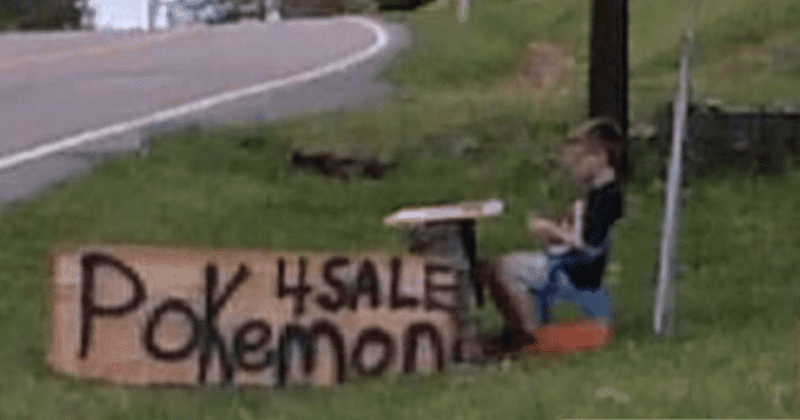 Eight-year-old Bryson Kliemann from Lebanon, Virginia was worried when his pup was not acting his usual self. He and his mom, Kimberly Woodruff, took the animal to Southwest Virginia Veterinary Services. Woodruff told WCYB, "He wasn't coming out of his cage and being the normal puppy he usually is. He was very lethargic, just not doing good." At the animal hospital, they got devastating news. The dog named Bruce had parvo, a contagious virus that affects dogs. While there was a cure, it would cost the family $700, which Woodruff knew was way out of their budget. But Bryson didn't give up hope. He was aware of the high price of treatment and decided to take matters into his own hands. He set up a stall outside his house offering one of his most prized possessions, his Pokeman cards, for sale to collect money for the treatment.

Bryson loved his pup who was his close companion. "It made me kind of sad because usually my brother and sister play together and I don't have anybody to play with. So, I usually play with him(Bruce)," he said while adding about his Pokeman cards, "I know everybody likes Pokémon cards so I just decided to sell them." Woodruff was at work when someone told her what her son was doing. "While I'm in school I get a text message with a picture of him and a sign on the side of the road selling Pokémon cards," Woodruff said. In an effort to help her son, she spread the word out about his efforts and shared a sweet and heartbreaking picture of the boy at his stall. He is seen seated at his stall with a board with the words "Pokeman 4 Sale" written on it.

She also set up a GoFundMe page for Bruce's treatment. "My babies puppy is very sick. He has been diagnosed with parvo. I know I have been raising him right. With a heart of gold because hes so worried about our bruce he is beside the road trying to sell his favorite thing in the world just to make his puppy better. We currently have enough money for Bruce to stay in the vet hospital for a total of 3 days. But myself and the vet are very worried that he may need longer treatment (sic)," the page read. It added, between May 3 and May 4, the pup lost 5 pounds overnight. People poured out their support for Bryson and Bruce and as of Monday, $14,593 was collected surpassing the goal of $800 by a lot. In later updates, the family thanked everyone for their generosity while promising to donate the rest of the money after Bruce's treatment to families who need it for their pets.

"Any remaining money left over from our cause will be used to help another family who is currently in a tough situation with their mommy dog. Bryson will also be using some money he raised to reward himself for his selflessness that has touched the hearts of so many," an update read. Bruce came back home on May 11 and was recovering at home. On a Facebook page, Woodruff put up a "Thank You" post for the overwhelming support. "I would have never imagined that one small selfless thing that my little boy had done would have became so big with a whole community and beyond our community behind him. We have more then exceeded our goal to cover Bruce's medical expenses and will be able to buy him all brand new things to come home to," she wrote.

Woodruff added, "I know alot of people are still donating to his cause. We truly appreciate it. I just want everyone to know the remaining money after bills that we raise will be divided up. It will be left on his account at the animal hospital to cover future vet visits. Bryson has also decided it would be best to help other families be able to vaccinate their dogs. So another family doesn't have to worry about a sick puppy. He will be leaving the remaining money with the animal hospital. I am also going to make sure that my baby rewards himself for his selfless act to save his best friend."