The sixth-grader from Missouri is starting small to make a big difference. 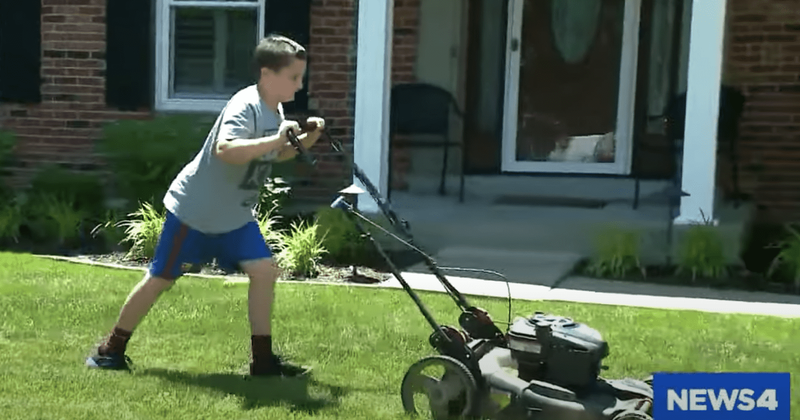 Jack Powers, an 11-year-old boy from South County, Missouri, is doing his part for social justice. The sixth-grader is mowing lawns in his neighborhood to raise money for Black Lives Matter, which has been behind the nationwide protests following the death of George Floyd on May 25.

The Black Lives Matter movement, according to its website,  was founded in 2013 in response to the acquittal of Trayvon Martin's murderer. The website reads:  Black Lives Matter Foundation, Inc is a global organization in the US, UK, and Canada, whose mission is to eradicate white supremacy and build local power to intervene in violence inflicted on Black communities by the state and vigilantes. By combating and countering acts of violence, creating space for Black imagination and innovation, and centering Black joy, we are winning immediate improvements in our lives.

Rest in Power, Beautiful. @BlkLivesMatter honors those we have lost to police violence. #BlackLivesMatter #JusticeforGeorgeFloyd pic.twitter.com/AtqA0YtEOK

The protests across the country inspired the pre-teen to take part in any way that he could. He started the business in early June and advertised it by placing flyers around his neighborhood, reports PEOPLE.

Jack's neighbor, April Strelinger, told KMOV  that while she didn’t need her lawn mowed, she still wanted to pitch in. “There's been a lot of change, flux and hardship so to see Jack's poster and find a helper, it actually opened up a great conversation with my son about how he can be a helper,” said Strelinger.

Twitter users applauded the little boy's attempt to make the world a better place. DoubleUrDosage wrote: This little boy was like "F**k this shit! I'm mowing the lawn for #BlackLivesMatter  goddammit!" In all seriousness, if you want to donate, contact Jack here: JackForBLM@gmail.com.

As the user said,  for anyone who wants to donate to Jack, you can email him at JackForBLM@gmail.com. So far he's raised  $110 at the time of this publication.

Change is coming and together, we have work to do. Watch and share @BlkLivesMatter newest video #BlackLivesMatter https://t.co/w48FbGSBg3 pic.twitter.com/sRQIiynXTB

The last time an 11-year-old boy made the news for mowing lawns was when Frank Giaccio mowed the White House Rose Garden lawn for the president. According to CBS News, in 2017, the boy from Falls Church, Virginia wrote a letter to the White House offering Trump landscaping service free of charge. He usually charged his neighbors eight dollars for the service.

His letter read: Dear Mr. President, It would be my honor to mow the White House lawn for some weekend for you. Even though I'm only 10, I'd like to show the nation what young people like me are ready for. I admire your business background and have started my own business. I've been mowing my neighbor's lawn for some time. Please see the attached flyer. Here's a list of what I have, and you're free to pick whatever you want: power mower, push mower, and weed wacker. I can bring extra fuel for the power mower and charge batteries for the weed wacker. I will do this at no charge. Sincerely, Frank.

Frank is hard at work in the Rose Garden and doing a great job! pic.twitter.com/u4f2DtLvu6

The POTUS agreed to let the young boy show off his grass-clipping skills.  Trump gave the youngster several high-fives and pats on the back as he did his job. "Have you done this before?" the president joked. "This is Frank. He is going to be very famous," Trump said. "He is going to be a Navy Seal one day. He's going to do great things for our country."