Instead of getting scared, the boy asked his parent to take a picture of him with the approaching bear. 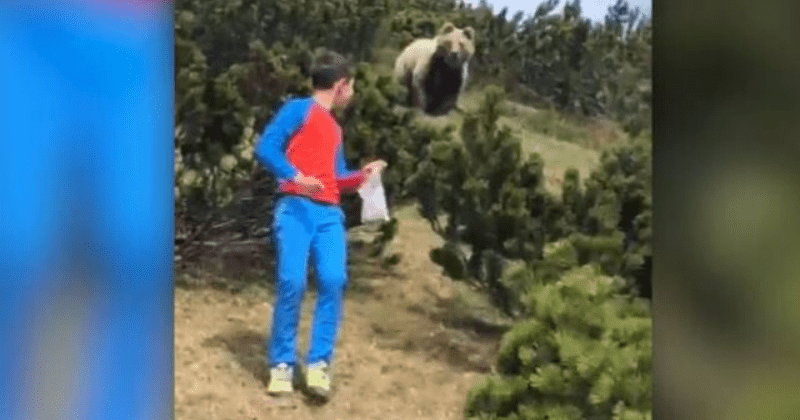 Running into a wild animal on a hiking trip is one of the worst fears most people have, even grownups. On Sunday, this 12-year-old boy from Italy came in close contact with a humongous brown bear who appeared to be stalking him, and the nerves the boy displayed in a heart-pumping life or death situation is nothing short of astounding. According to CNN, the incident occurred in Trentino, Northern Italy where the boy, Alessandro was out with his mom and stepfather for a hike in the mountains when they were approached by the bear.

A 12-year-old knew what to do (and what not to) when he crossed paths with a large bear on a hike in northern Italy. A video of the encounter has gone viral. https://t.co/CsH29DBnkt

The video is as nail-biting as it could get when you see the boy, impervious at first to the impending danger, is nonchalantly climbing down the hill as the bear starts to gain on him. Alerted of the bear's presence, the boy appears to look back before turning back to calmly walk down as his stepfather asks him to keep his composure. "Come, come Ale", the stepfather can be heard saying in Italian as they move through a row of bushes while the bear creeps up on him. Loris Calliari, the stepfather, captures the whole encounter on video which shows us just how differently things could get had any of them panicked. According to Calliari, a group of six family members set off on an excursion in the mountains near their home in the valley. Alessandro was busy picking the pine cones, when the family saw, what is now identified as a Marsican brown bear just a few hundred feet away.

Speaking to CNN, Calliari said: "I noticed that he was moving and I told him to walk slowly, to be careful, that I will take a picture but to move. I was nervous at first but then saw that the bear was not scared, was not acting, so I calmed down," he added. This was an unbelievable but dangerous photo opportunity for Alessandro, who Calliari says is an animal lover, and especially loves bears. So rather than get scared, he asked his parent to take a picture of him with the bear right behind him. Even though the boy and the stepfather were in control of the situation, not everyone was so cool. The boy's mother and grandmother who were just a few feet away were terribly upset and they began to scream.

Brenta Dolomites, Italy. Close encounter between a brown #bear and a family that handled the situation perfectly. See the bear sprinting away at full speed upon realising he/she came across people

resharing the vid here for those of you not on fb pic.twitter.com/N2jFo0w8xw

Alessandro meanwhile was at his relaxed best and even went to say: "This is so cool", at one point in the video. His reaction, of course, wasn't natural because most people are unaware about how to react under such stressful circumstances. But, thankfully, in the boy's case he was prepared as they'd seen a Youtube Video around a month ago which taught them what to do when they run into a bear. "So, he was prepared, "Calliari explained. His education did pay off as the bear eventually lost interest and walked away, and Alessandro approached his stepfather asking him:  "Did you take the picture?"

"Where are you going with my blueberries?"

Kid (& dad) have balls of steel - he's grinning.
Mum? Less so.
Trento, N Italy. ,One of the relocated Slovenian bears I suppose. pic.twitter.com/W0uVYF7Qos

The boy's display of courage as he was being followed by the bear was well received by people all over the internet. One user, Skonenblade commented on the Youtube video and said: "Wow, props to everyone in the video for keeping it together. Especially the kid. Amazing." Another user said: "The bear went to the smell of food in the bag that the boy was holding, it was necessary to throw the package the bear would have fallen behind." Todd Carroll wrote: "Jaw on the floor! That calm dad!" The video has since garnered over 3 million views on Youtube, Facebook, and Twitter combined.

Allessandro, 12 who has a passion for animals, had been reading during the pandemic lockdown about how to react when encountering a bear.
Well, he encountered a bear while hiking in the mountains of northern Italy.

I would've had a different outcome! 😧pic.twitter.com/KxnJMoFSyl