Human Ashes Found In Bottle After Hurricane Dorian: Please Don’t Open Me, My Ashes Are On A Journey

In the aftermath of Hurricane Dorian, a group of friends found a bottle with human ashes, and a note asking people to help the bottle continue its journey. 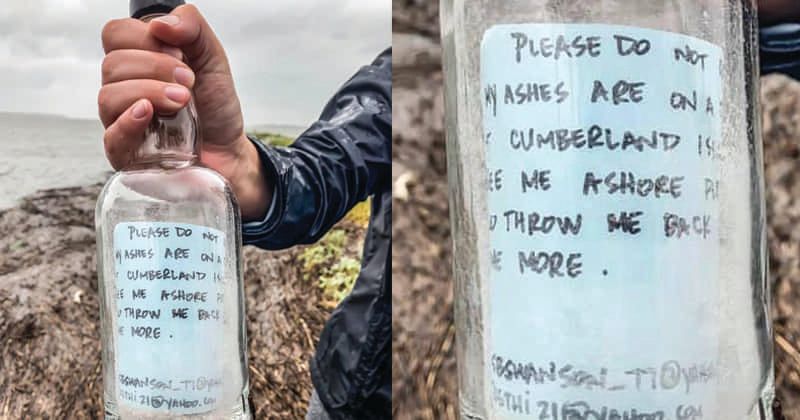 Everyone has their own personal way of wanting to be remembered and commemorated after their death. Some merely want to be buried in a simple coffin, some wish for their ashes to be strewn in a place significant to them, and some just want to travel, like this bottled fellow found in the aftermath of Hurricane Dorian. A Redditor recently posted a photo of a bottle washed up (in an indeterminate location) after Hurricane Dorian abated. The bottle probably contained a nice scotch in its former utilitarian life, but currently contained cremated ashes and a polite note that read, “Please don’t open me, my ashes are on a journey, I started at Cumberland Island, so if you see me ashore, please snap a picture, email it & throw me back so I can travel some more,” followed by two email IDs.

The bottle was found on Georgia shores by Sadie Nazworth, who told The Charlotte Observer that she came across the bottle while checking how Hurricane Dorian had affected the tides in the Cumberland Harbour area with a group of friends. Cumberland Island lies near Georgia, so the bottle was presumably just beginning its journey when it was rudely interrupted by the hurricane. “My friend Chelsea (Alyssa) fished it out of water with a tree limb, while another friend made sure she didn’t fall in,” Nazworth told the Observer. “We read it ... and thought it was such an awesome and beautiful idea! We were very excited and surprised.” The note was signed by Nancy Gantt Swanson, and the group realised that Swanson's remains were on their way up the St. Mary's River rather than out to sea as intended.

The group fulfilled Swanson's request and did as the note instructed, emailing along a photo of the bottle before tossing it into the sea...where it promptly got caught in more debris, out of reach. But Nazworth is determined to send Swanson's soul on its intended journey, saying, “One of my friends is going out with their boat to make sure she’s making her way to the next destination.” The photo was shared widely across Reddit, and got several comments with mixed reactions. While several people thought it was a cool idea to travel the world in memoriam, some wondered about the bottle's impact on marine life, with one Facebook commenter noting, "That is pretty cool but I pray a fish, shark, or whale doesn't digest it...there is so much in our oceans already." A Redditor added, "I don't ever want to be buried in a casket and I've told my family. We don't live near an ocean but I would love this for my remains. My request to be scattered onto golf courses keeps getting shot down for "reasons"." Several of Swanson's family members also found Nazworth's original post, and thanked her for helping their beloved relative continue her journey into the unknown.