The 'they told me I could be anything' memes are back in town! 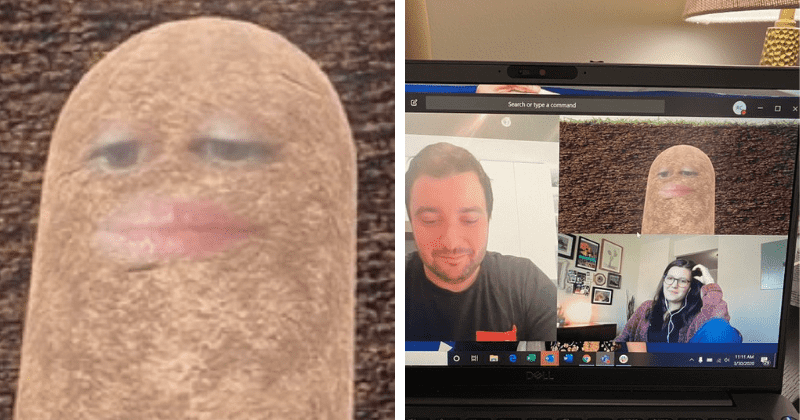 We all need some entertainment during these uncertain and troubled times and we happen to stumble upon it where you'd least expect it. Though there are many who have been laid off work or have their jobs temporarily halted due to the ongoing pandemic, those lucky enough to still be employed are now working from home. This new routine can take some getting used to, especially having to manage so many meetings and discussions via webcams and calls.

Such was the case for Lizet Ocampo, the political director at People for the American Way, an organization committed to encouraging Latinx voters to vote and help progressive candidates win elections, according to the Mirror. Like most other offices, Ocampo's had also asked all their employees to work from home so she and her colleagues began having meetings using video calls. That's where Ocampo's trouble began.

my boss turned herself into a potato on our Microsoft teams meeting and can’t figure out how to turn the setting off, so she was just stuck like this the entire meeting pic.twitter.com/uHLgJUOsXk

As part of her work with Latinx voters, Ocampo was to join a regular virtual happy hour for community leaders hosted by Equis, as a fun way to connect. To make things more lively and entertaining, Ocampo had previously downloaded some funny filters to use during these happy hour sessions to lighten the mood a bit. The problem was that she forgot that she had one on during an important meeting.

I yam potato boss. You should see me in a crown, right @billieeilish? I yam glad this is making folks laugh at this time. Please stay planted at home and safe! For more needed laughs, follow my favorite comedian @cristela9 . Potate out. #HASHtag #PotatoBoss https://t.co/OxpidZc921

"So Monday morning, we had our meeting and I usually try to do a camera, and when we started the meeting, I saw myself as a potato," Ocampo said, the Daily Mail reported. "I was so confused as to why I was a potato," she said. "Of all the things I could be, why a potato?" Much to her surprise, Ocampo realized that it was because she had downloaded those funny filters earlier. Unfortunately, as much as she tried, she just couldn't figure out how to get rid of them or turn off the feature.

How I be feeling these days pic.twitter.com/xGWg453RNh

Meanwhile, Ocampo's colleagues who were watching her potato-faced head bobble about were laughing their socks off. "As a progressive organization, we fight for justice for all and access to opportunities, and in the last three-plus years, it’s been a little tough," she said.  "I just kind of gave up and stayed as a potato for the rest of the call." One of Ocampo's colleagues, Rachele Clegg, could not help but screenshot the hilarious moment her confused boss [Ocampo] had unsuccessfully tried to get rid of the awkward filter. She tweeted it, saying: "My boss turned herself into a potato on our Microsoft teams meeting and can't figure out how to turn the setting off, so she was just stuck like this the entire meeting."

The picture that Rachele shared blew up on the internet and got over 900,000 likes. Ocampo didn't even find out about it until Monday evening when Rachele texted her informing that: "Are you awake right now? I have something hilarious to tell you and I hope you think it’s as funny as I do because I’m also scared. I tweeted about you as a potato today and it’s VIRAL."

Ocampo later told the Mirror that she wanted to keep spirits high within her team to encourage them to work as hard as they can. "Everything about the potato story is hilarious: the fact that it happened, the look of the potato (my) face, and the expressions on the faces of my colleagues," she added. We all need a laugh right now, and it's extra special that this brought so many people in our lives a little bit of joy.". Her colleague Rachele, on the other hand, was happy that she was glad that she wouldn't be fired for sharing her boss's awkward and embarrassing moment online. "The good news is that my boss, Lizet Ocampo, will not be sacking me tomorrow," she tweeted later.