Boomer The Dog, Beloved Mascot of Pennsylvania Baseball Team For Over A Decade, Dies

The golden retriever, who was the Pennsylvania team's mascot for over a decade, has passed away. 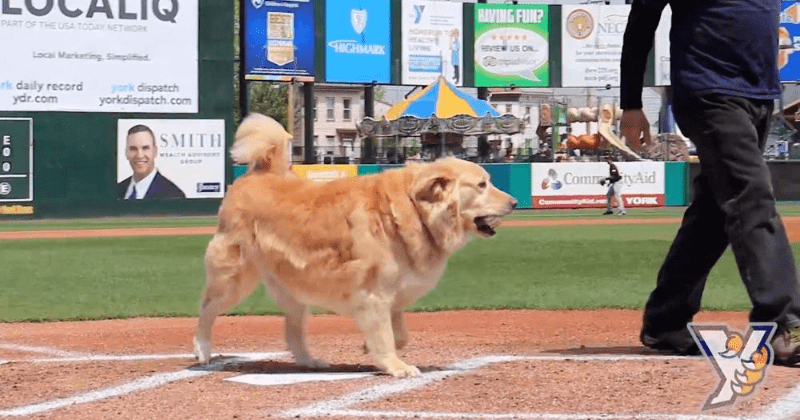 Boomer The Dog was synonymous with the Pennsylvania Baseball team, York Revolution, after serving as its team dog and ambassador for over a decade. However, the town's furry companion has passed away even though he was expected to enjoy a long retirement. Boomer, the golden retriever, retired from his position and offered up the job to his successor, Blue, at the end of 2019's independent Atlantic League baseball season. The news of the beloved animal's death was confirmed by The York Revolution on Wednesday, reports Fox43. Talking about the terrible loss of friend and companion, General Manager John Gibson said: "You can’t put into words what Boomer meant to all of us at the Revolution and the fans he made smile each time he visited. He was one of a kind, and we were lucky to have him."

In a heartfelt tribute on Facebook, York Revolution said: "With heavy hearts, the York Revolution announced today the passing of team dog emeritus Boomer. You can’t put into words what Boomer meant to all us at the Revolution and the fans he made smile each time he visited. He was one of a kind, and we were lucky to have him. The team offers our sincerest appreciation to Jeff and Cindy Hoke, who generously opened their home and hearts to Boomer to give him a real home beyond the ballpark for most of his life." Besides appearing regularly at the ballpark, Boomer spent much of his decade with the team traveling around the county community. He even visited thousands of students from the Boomer's Book Club where he encouraged them to improve their reading skills and offered tickets and other prizes from team sponsors. The doggo had also earned his certification as a therapy dog while serving as the team dog. According to PEOPLE, Boomer was loved by Revolution fans for his happy personality; he always loved picking up baseballs and appearing in various events in the community. After retiring from his duties, Boomer was relaxing with his owners Jeff and Cindy Hoke, who offering him a loving home in his retirement.

Currently, the Revs are encouraging people to donate in Boomer’s name to the York County SPCA. The SPCA and Revolution had a long working relationship after the former helped them find Boomer 10 years ago when the team was in search of a furry mascot. Hundreds of people were heartbroken by the news and they proceeded to let their thought be known for one of York's favorite mascots. Cannonball Charlie wrote: "Always a wonderful sight to see Boomer at the ballpark. You will always be remembered!" Vicki Fissel wrote: "So sorry to hear of sweet Boomer's passing. Talked to him and petted him when we passed by him and loved seeing his Frisbee catching and hat stealing antics! Run free, Sweet Boy!"

Bob Gibson wrote: "I loved when he came into the front offices. He was so happy to see everyone. It was literally the best part about my job when I worked there." Karen Lindeman Korp wrote: "Aww, he was a sweetheart!! We had the pleasure of meeting Boomer a few years ago and our youngest immediately loved him. He was the absolute best!" Robert Stahl said: "Dear Boomer... saw you at so many games... you entertained us and we got to pet you! Thank you so much Boomer... go to the rainbow bridge and chase some baseballs..." Misty Mehaffie-Wibel from the East York Veterinary Center, where Boomer for regular checks, also added a tribute to the puppy and said: "Thank you for trusting us at East York Veterinary Center with his care all these years. He was so very loved and will be missed dearly. Sending big hugs."