Bodybuilder-Actor All Set To Marry His Sex Robot: "She Can't Cook, But She Loves Georgian Food"

He claims to have met Margo in a bar when a young man attacked her and he saved her. The two have been together ever since and are ready to take the big leap. 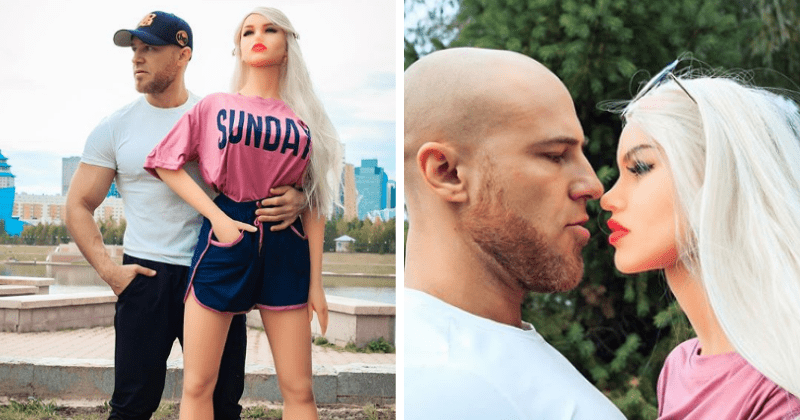 Well, it looks like the future is officially here. No, we haven't built flying cars yet, but we have discovered the joy of holy matrimony with a sex robot. Well, that's what Yuri Tolochko says. The bodybuilder and actor from Kazakhstan first met the robot named Margo at a bar when a young man apparently attacked the doll. But Yuri managed to save her, he claims. They have been together ever since and are now tying the knot!

According to The Daily Star, Yuri has vowed to marry his love who he claims has been struggling with self-esteem issues. "When I presented her photo to the world, there was a lot of criticism and she began to develop a complex so we decided to have plastic surgery. She has changed a lot. At first, it was hard to accept but I got used to it later on. It was at a real clinic with real doctors." "She began to develop a complex" after her media appearances and Yuri paid to enhance her appearance with plastic surgery. You can see the difference in her appearance pre and post plastic surgery on her Instagram profile. The two shared photos of their dates often on social media, each having their own profiles: yurii_tolochko and margo_party. As you scroll through you can see tons of photos of the two at restaurants, at the bar, outdoors and even snuggled up in bed.

The unique couple had been invited to a Russian TV show Comedy Club. It may say comedy but people take their relationship pretty seriously. Tolochko shared backstage images of their television appearance with the message: I won't spoil it. You'll find it out at the right time! The two have been dating for 8 months, according to local media and Yuri feels its time to get serious with his partner. He admits that the two have occasional arguments but despite that, he still wants to marry the doll.

Yuri treats his fiance like any other real human being. He even got her a job as a waitress at a local bar. But he admits she does need help. "She can't walk by herself, she needs help," he says. So what kind of person would he say his bride-to-be is like? "She swears, but there is a tender soul inside," says the smitten actor. Does she have any likes and dislikes? He shares, "Margo doesn't know how to cook, but she loves Georgian cuisine. Her favorite dish is khinkali."

Users on Twitter had quite a few things to say about this unique love story. One user wrote: Is this a joke? It’s so crazy. If real he needs professional help for his delusions. Some believed it was a fake story and just an influencer marketer strategy while others felt the man needs psychological help. However one user was more sympathetic and tweeted: Agalmatophilia, it's a real thing. And whilst i don't understand it, i do acknowledge and respect that it is real for them.