Yuri Tolochko has had three sex doll partners in as many as six months and claims to love each of them equally. 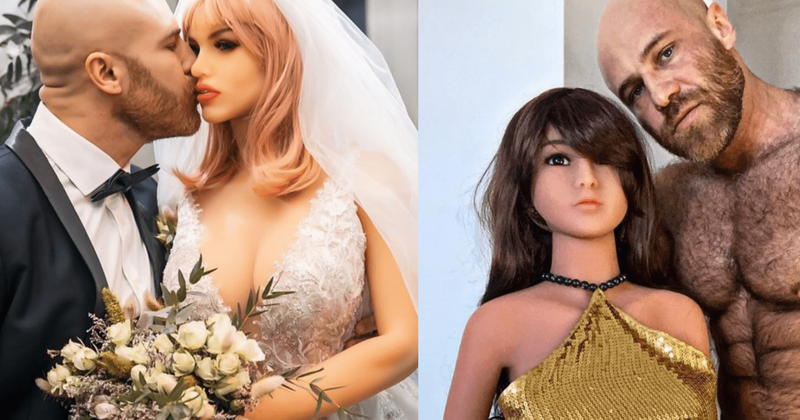 Yuri Tolochko has likely become a household name by now. After all, he's the man who fell in love with his sex doll, married her, and then ditched her to fall in love with another sex doll. But, if you thought that was the end of the infamous Tolochko saga, you are deeply mistaken. Recently, the bodybuilder in a closed triad with two sex dolls revealed a juicy detail from his love life and said both his partners have fallen in love with each other. He had last announced that he was in a relationship with a second sex doll, his wife Lola, when his old sex doll Margo was undergoing repairs. Then he revealed he was in a throuple with Lola and another doll, Luna. "Besides Lola, I may have another wife. You saw her in the previous post. So most of you suggested giving her the name Luna. I decided to heed your advice and I will call her Luna. Also, some of you thought she was too young, a teenager. And although Luna is an adult, she just looks like that, because she is Asian and many Asian girls look very young, I decided to listen to you again. I don't want to offend some of you, so I will try not to show any erotic scenes with Luna. Me and Lola will treat her like a sister," he wrote in a post introducing Luna.

The Kazak bodybuilder shared the news in an Instagram post at the beginning of the month, explaining that his dolls Lola and Luna are getting acquainted with each other very well, adding that he spends time with them both together and separately. "So me and Luna get along great. Lola also fell in love with Luna," he wrote in the post. "I give each of them a separate time, but the three of us together are also having fun. Luna is so babe, so honey. I just want to hug her and not let go." He went on to add: "P.S. Btw, I am often asked how a doll differs from a living woman. In addition to the fact that she can be for a long time in... different poses and you can realize a variety of fantasies, she also has a unique p***sy. There are elements that a living woman does not have. And you just fly into space when you play with her."

As we had previously mentioned, Yuri was married to a robot named Margo, whom he met at a bar when a young man apparently attacked her. But he claims that he managed to save her. They began dating soon after and even got married. According to The Daily Star, he treated his "woman" just like any other real human being. He apparently got her a job as a waitress at a local bar. Although there are some struggles when it comes to dating a robot. "She can't walk by herself, she needs help," he said. Describing Margo, he stated that she has a "tender sould inside" despite a disposition to swearing. He added, "Margo doesn't know how to cook, but she loves Georgian cuisine. Her favorite dish is khinkali."

After moving on from Margo, he had a new "lady" in his life—one that had a human head and a chicken body—Lola. After achieving sexual stimulation with a chicken he decided to order a new custom-made bride. “I identify her as a massive chicken,” he said in a video introducing his new partner to his followers on Instagram. Yuri is seen cradling Lola in the video where he shared, “Let me introduce to you, my new wife. This is Lola. Lola [is] queer, she has not yet decided on her sexual and gender identity [she is in search]. Lola has a woman's head, a chicken's body, the navel has depth and can be used as a vagina and a penis inserted into it. I'll show you this one day." Tolochko is pansexual, and says he can fall in love with "a character, an image, a soul, just a person."

Bodybuilder Divorces Sex Doll Wife After Being Unfaithful to Her (Now He's Marrying Another Sex Doll – With the Body of a Chicken) https://t.co/r3njWWWNww via @worldofwonder