The wedding was moved for a second time because he was attacked at a trans pride rally in Almaty on October 31. 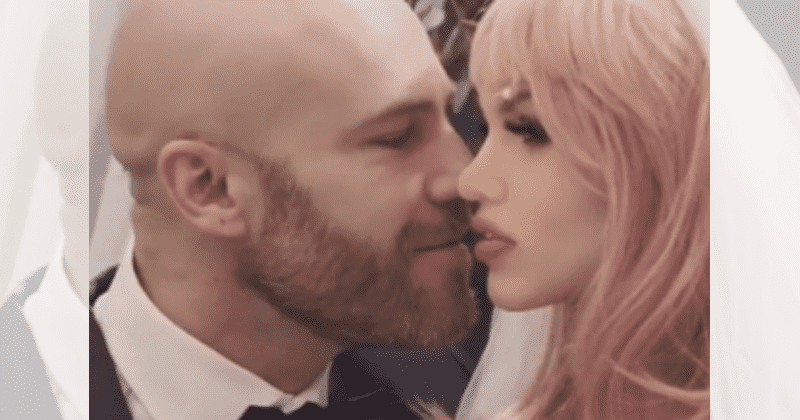 In a bizarre incident, a bodybuilder has finally married his sex doll after delaying the ceremony for several months. Yuri Tolochko of Kazakhstan has been living with his toy for a year-and-a-half and reportedly popped the question back in December 2019. Tolochko met his partner at a night club and the couple was set to get married in March this year but the pandemic played a spoilsport to his plans. According to DailyStar, the wedding was moved for a second time because he was attacked at a trans pride rally in Almaty on October 31, as a result of which he suffered a concussion, a broken nose after dressing as a woman for the march. He even put up pictures of his injuries on his Instagram account.

The attack reportedly occurred because he used a female character to addresses the biases in society. Narrating the incident, he said: "A few months ago I started using a female image for performances. I named this character Amanda. Through this image, I convey certain ideas in our society. So I was beaten." In a video Tolochko himself recorded, a man can be seen tearing off his wife and flooring him with a big punch. After recovering from the attack, he finally got to see his bride walk the aisle. Sharing a video of the celebration on Instagram, he wrote: "It's happened. To be continued." Tolochko is pansexual, and says he can fall in love with a character, a soul, a person, or an image.

Explaining his preference, he said: "I like the process of sex itself. And gender, sexual orientation are not particularly important here." When asked about his life behind closed doors with Margo, he shared some personal moments and said: "Our story turns me on much more than sex itself. I also love BDSM. I love being tortured, I can endure a lot of pain. I love to dominate too. Margo is capable of what other people are not capable of." As per reports, Tolochko's wedding with Margo is set to stand as per Kazakh law which mandates both consenting parties to be male and female and over 18 years of age. Currently, he's on the lookout for properties in Almaty or Nur-Sultan for the newlyweds to live in.

For the couple to get to this stage, things weren't at all easy as the husband was worried about his bride's appearance after receiving a lot of criticism from friends and family. To solve the problem, he signed her up for plastic surgery. Talking about the decision, he said: "When I presented her photo to the world, there was a lot of criticism and she began to develop a complex so we decided to have plastic surgery. She has changed a lot. At first, it was hard to accept but I got used to it later on. It was at a real clinic with real doctors," he affirmed. This isn't the first time Tolochko is in the news. He caught the eyes of the media when stories about his engagement to Margo went viral.

Tolochko, who claims to be in love with Margo, treats his fiancé-now-wife like a living lady and also maintains an Instagram account in her stead, sharing several photos of the two spending time together at bars, restaurants, and in bed. The unique nature of his relationship earned him a callup to a Russian TV show Comedy Club. Speaking after their engagement earlier this year, as per New York Post, Tolochko admitted that his partner has physical limitations. She can’t walk by herself — she needs help," he told Central European News. "Margo doesn’t know how to cook," he said before adding that she knows how to eat. "[She] loves Georgian cuisine. Her favorite dish is ‘khinkali’ [dumplings]," he continued.