Cameron Welch took to TikTok to share the rules his mom makes him follow as a young black man in the country. 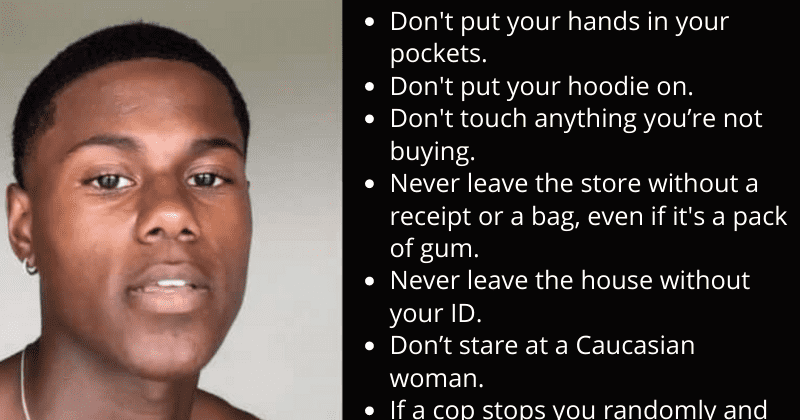 If you think the problem of racism is something new in America, think again. The protests across the country are happening not just because of one incident, but due to decades and decades of discrimination and violence. In the wake of the recent demonstrations, more black people are coming out with stories of the racism they face every other day. Cameron Welch is a young 18-year-old black boy, who posted a powerful video to TikTok listing all the rules his mom made him memorize to help him stay safe whenever he left the house. According to Scary Mommy, he wrote in the caption of the video: Jus some unwritten rules my mom makes me follow as a young black man #blacklivesmatter. The video has now been viewed more than 10 million times.

To avoid being harassed by the police, Welch listed out how to stay safe before leaving home with the following rules:

Don’t put your hands in your pockets.
Don’t put your hoodie on.
Don’t be outside without a shirt on.
Check in with your people, even if you’re down the street.
Don’t be out too late.
Don’t touch anything you’re not buying.
Never leave the store without a receipt or a bag, even if it’s just a pack of gum.
Never make it look like there’s an altercation between you and someone else.
Never leave the house without your ID.
Don’t drive with a wifebeater on.
Don’t drive with a du-rag on.
Don’t go out in public with a wifebeater or a du-rag.
Don’t ride with the music too loud.
Don’t stare at a Caucasian woman.
If a cop stops you randomly and starts questioning you, don’t talk back, just compromise.
If you ever get pulled over, put your hands on the dashboard and ask if you can get your license and registration out.

I got, "Look both ways before you cross the street." My mother never had to teach me, "Always get a receipt." That, right there, represents white privilege. Understanding the difference, really understanding that difference, would go a long way toward healing our bleeding nation.

How terrifying it must be to be the mother of a black child, constantly in fear of his safety. George Floyd, Breonna Taylor, Ahmaud Arbery, Sandra Bland, Tamir Rice, Michael Brown, and so many countless others lost their lives... for what? A mother lost their child, for what? When one person commented saying: Saving this video for my future son, Welch replied: His future shouldn’t be like this. Isn't that just gut-wrenching? Isn't it time for change? The timing of the video couldn't have been more important. “In this moment in our country, it was necessary for me to use my voice, so I put out the video,” the 18-year-old told HuffPost. “I wanted people to hear and understand the real truth of a Black man’s daily experience.” In another video, Welch opened up about how his friends don’t say “I’ll see you later” after hanging out at each other’s houses and heading home. Instead, they say, “Stay safe.” “Every Black man has that feeling of, ’Am I gonna come home today?” he says in the video. Education and awareness are important and people shouldn't hide in ignorance anymore. The young teen said he hopes the viral videos open more people’s eyes to the unfair reality of everyday life for so many black Americans. “I want people to see that we need change and that no one should have to live like this,” he said.

Ever? Or never? I’m a white parent and the only thing in common with Cameron’s mom’s rules that we told our kids, “don’t be out too late!” And the fact that I didn’t have those rules is #whiteprivilege and it needs to change! #blacklifematters

Many Twitter users, white and black, posted about how racism in the country is glaringly obvious and how heartbreaking it is for parents of black children to go through something like this. Jeffi wrote: I'm a 78 year old white man and I understand why his mother has the rules she has. She wants her son to come home alive! Look at the comments here indicating many who don't understand and blame young black men rather than our system. At no time in my life have I had his worries! Robert Kasasa tweeted: Ooh this is so painful. How are they gonna be kids? Be allowed to care less, to make childhood mistakes... Ooh. Shaye47 added: This is so messed up. Our young black men have to have certain “rules” to live by so they can LIVE!

Really sad the life of anxiety the black community must lead. To have to think this way each time you step out of the house. Doesn’t make life very enjoyable. So you can understand their anger a little more. Seriously, develop a sense of empathy and do some listening.