Huckleberry has been put down after it grew too close to the locals who lured the animal with food to take pictures and videos with it. 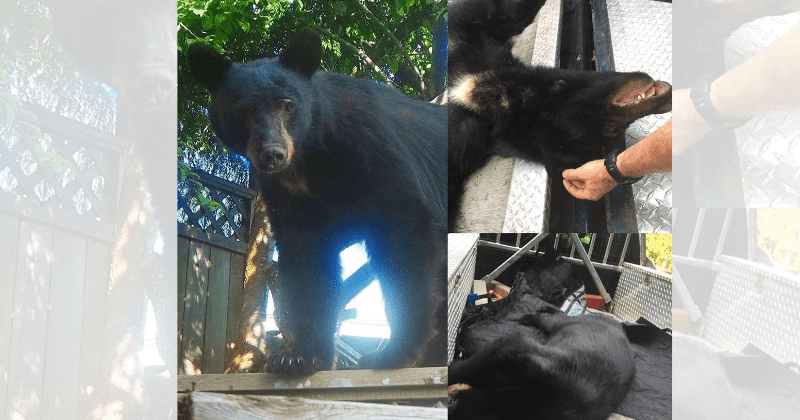 A wild black bear in Canada has been put down after it became too comfortable with people, who lured the bear with food so as to take pictures and videos with it. The news was confirmed by a heartwrenching statement released by North Shore Black Bear Society on Facebook last Wednesday, reports PEOPLE. According to the release, the bear, fondly called Huckleberry, became close to people on July 2 when it began scavenging for scraps from an organics cart after its enclosure was left open. The bear was friendly as it was easy to send away back into the woods once it had been fed.

People are the worst sometimes😢

I ran into Huckleberry a few times in my neighbourhood, but never followed them around for a photo. To learn that my neighbours actively conditioned Huckleberry to human food, just for social media, is really sad.https://t.co/TemVdTKcHD

The statement, written by Luci and Danielle, volunteers from the bear society, also narrates how the tale of the wild beast-human relationship gradually formed and how it came to be known as Huckleberry. "The next time we met, you were at the roadside eating berries," the bear society continued. "As we walked you back to the forest, you stood and sniffed a garbage can. We used a firm tone and told you to leave - you listened. As you walked away, you left a bright pink scat full of huckleberries! We were so proud of you for eating natural foods, despite all the tempting treats residents had left available to you. From that moment, we named you Huckleberry!" The locals would continue to meet the bear several times over the next few weeks with the page recalling a time where it would "roll the tongue out at us to smell the air" as people walked him back to the forest.

"We knew you remembered us. Residents told us you passed through their property, but you were easily moved on. You were such an easy-going, calm bear. The perfect Deep Cove resident," the duo wrote in the statement. The conservationist organization lambasted the locals for abusing the privilege of luring the bear with food to capture photos and videos of their interaction. "People admitted they allowed you to do that for a video and they neglected to move you on...a death sentence. If only people had used a firm voice with you, you would have listened. Or respected you enough to not have any garbage or food scraps accessible in the first place. We did you a disservice, Huckleberry."

The bear was last seen on July 31 when it was seen eating berries at the edge of the forest. The organization quickly made its way to make sure the bear was okay and that it wasn't hounded out by dogs. However, by the time volunteers reached him, residents had gathered to take videos of the bear eating organics from an unlocked cart. Due to there being too many people, it wasn't possible for them to send the animal on its way back. "When you finished eating, you calmly walked by and left our gaze. That was the last time we saw you. Later that day you were tranquilized by the Conservation Officers and taken away to be killed," they wrote.

The statement ended with a damning verdict on how even though the bear was willing to co-exist, humans with their greed and self-centered nature wouldn't let that happen. "You were willing to coexist, but people were not. You showed us every time we met that you were a good-natured bear, we are deeply sorry that we couldn’t save you. We’ll always have a place in our hearts for you, sweet boy." The post has received over six thousand reactions and a thousand comments with a majority of them grieving at the loss of a friendly being. Diana Philips wrote: "This truly breaks my heart. As a human race...we suck for what we put you poor bears through that are just trying to survive & live your best life. So very sorry we took that from you sweet Huckleberry! You were a good, sweet bear that we'll truly miss seeing around the forest & in pics. May you rest in peace beautiful sweet Huckleberry bear!"