Robert wrote he felt "awesome" being an uncle as he shared the pictures of his three-week old niece on Instagram. 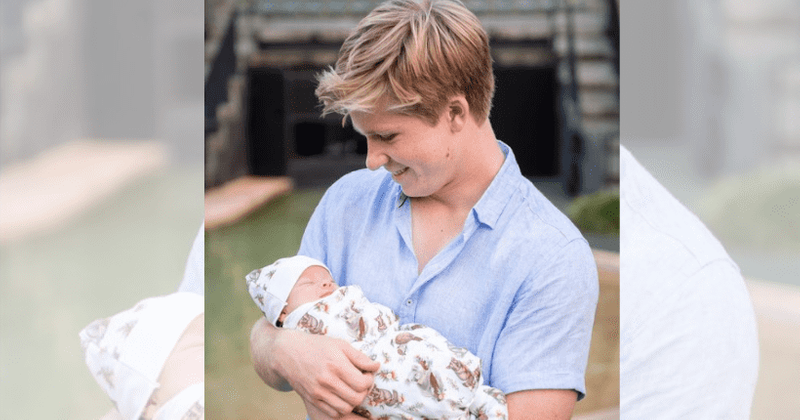 Three weeks after Bindi Irwin and her husband Chandler Powell gave birth to a beautiful baby girl, she was captured smiling for the first time. The baby named Grace Warrior was pictured in her uncle Robert Irwin's arms as she flashed a faint smile as Robert lovingly looks at her. The picture was one of three shared by Robert on Instagram and was quickly received warmly by fans. In another picture, Roberts is seen flashing a wide and proud smile. In the third, the whole family—including Grace's parents along with Grace's grandmother Terri Irwin—is seen looking down at the newest member of the Irwin family. Robert added a caption with the pictures where he offers a loving tribute to his niece. He wrote: Being Grace’s uncle is awesome!! I can’t wait to watch this little warrior grow up and take on the world - I reckon she’ll be running the zoo in no time!

He added: I feel so honoured that I’ll get to share all the amazing experiences that I had growing up in a zoo, and teach her about everything from rescuing wildlife to caring for our family of animals! The post was liked nearly 450,000 times and commented by many. Powell commented on Robert's post, saying: The beginning of the best adventure! Grace's mother, Bindi also left a comment on the post that read: Grace’s little smile in the last picture ❤️ Here’s to many wonderful adventures ahead. We love you! A report in Daily Mail stated the pictures were taken at the Australia Zoo in Queensland. Grace was born on March 25, 2021, at the Buderim Private Hospital on Queensland's Sunshine Coast. Irwin shared news of the birth on her Instagram account with a picture of her and her husband with the baby. Incidentally, the birth also coincides with the couple's wedding day.

She wrote: March 25, 2021. Celebrating the two loves of my life. Happy first wedding anniversary to my sweetheart husband and day of birth to our beautiful daughter. ❤️ Grace Warrior Irwin Powell. Our graceful warrior is the most beautiful light. Bindi also highlighted the baby was named after family members on both her side and that of her husband. Bindi added: Grace is named after my great-grandmother, and relatives in Chandler’s family dating back to the 1700s. Her middle names, Warrior Irwin, are a tribute to my dad and his legacy as the most incredible Wildlife Warrior. Her last name is Powell and she already has such a kind soul just like her dad. There are no words to describe the infinite amount of love in our hearts for our sweet baby girl. She chose the perfect day to be born and we feel tremendously blessed.

A week later, they shared another picture marking their baby's one week since birth, and another later marking Grace's second week. Robert and Bindi share a very loving relationship that is often seen in their social media accounts. He had previously posted about his sister being an "amazing mum" where he shared a picture of them both with Bindi holding her child on the occasion of National Sibling Day. He wrote: I’ve got the absolute best sister - Grace definitely has an amazing mum. Bindi commented on the post and wrote: Thank you for being the greatest brother and uncle to beautiful Grace. We love you! She herself dedicated a post to her brother on the day with this picture from their earlier years. She wrote: I’m thankful every day that I get to be your sister. Thank you for being such a wonderful friend and light in my life. #Flashback