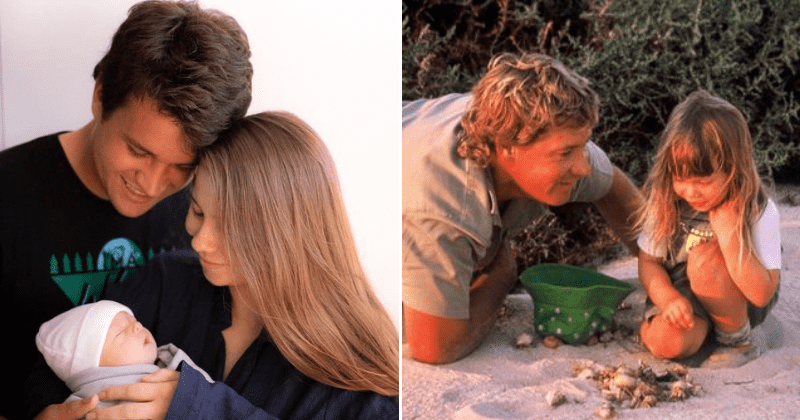 It's a girl! New mom Bindi Irwin opened up about welcoming her baby girl in a sweet Instagram post, posting a photo of her and husband Chandler Powell holding their firstborn and another picture of a baby blue onesie with a koala bear on the front. Crikey! It's the Irwins star and Powell revealed that their daughter was born at 5:52 p.m. and weighed 7 Lbs. and 7 oz, measuring 20 inches long. She was also born on a special day on March 25: the couple's first wedding anniversary. What's more heartwarming is knowing what the two have decided to name their baby girl. The 22-year-old revealed her daughter's name, saying the middle name honors her later father, Steve Irwin.

Bindi Irwin wrote: March 25, 2021. Celebrating the two loves of my life. Happy first wedding anniversary to my sweetheart husband and day of birth to our beautiful daughter. ❤️ Grace Warrior Irwin Powell. Our graceful warrior is the most beautiful light. Grace is named after my great-grandmother, and relatives in Chandler’s family dating back to the 1700s. Her middle names, Warrior Irwin, are a tribute to my dad and his legacy as the most incredible Wildlife Warrior. Her last name is Powell and she already has such a kind soul just like her dad. There are no words to describe the infinite amount of love in our hearts for our sweet baby girl. She chose the perfect day to be born and we feel tremendously blessed.

Mom Teri Irwin also had some beautiful words for her daughter. The 56-year-old conservationist shared a touching post on Twitter writing: Love is not a big enough word. My heart is so incredibly happy. And I know that Steve would be beyond proud. Grace is the next generation to continue his mission and message of conservation. She chose her parents wisely. Bindi and Chandler are already the best parents ever!

Irwin's little brother 17-year-old brother Robert also shared a sweet photo on Instagram holding his niece. He said: Let the uncle adventures begin! Love you so much, Grace ❤️ This little one picked the two best parents in the entire world. The most incredible, caring and strong Mum... and the funnest, coolest and kindest Dad. Love you three so much - I can't wait for this exciting journey ahead.

The daughter of the late renowned crocodile hunter Steven Irwin married Powell, 24, on March 25, 2020, Due to the pandemic, the pair tied the knot in a private and socially distant ceremony at the Australia Zoo. They had been dating for six years before getting married. The family often finds ways to honor Steve Irwin, the  Australian television personality and conservationist known best known as the "Crocodile Hunter." Steve was tragically killed in 2006 by a stingray while filming off the Great Barrier Reef. He was just 44 years at the time. His wife, Terri, and kids, Bindi and Robert, continue to carry on his legacy by running the Australia Zoo. It's beautiful how when Bindi Irwin announced she was pregnant last August, she called her baby a "Wildlife Warrior."

What's so special about the name? According to CBS News, the family also helps run the Zoo's nonprofit, Wildlife Warriors. The nonprofit was started by the late Steve Irwin way back in 2002. Bindi is continuing to honor her dad's work and recently announced a new line of "Baby Wildlife Warrior" apparel ahead of her due date. According to the website, the new parents have "created the most beautiful baby/child range to share with you. Your own little Wildlife Warrior will love our Australian-designed clothes. Also check out our large range of gorgeous gifts!" The proceeds will help support the conservation efforts of Wildlife Warriors Worldwide. The Irwin family sure knows how to keep Steve's spirit alive and that is truly heartwarming!