Betty White Is Turning 100 And We're All Invited: "I’m Going BIG For My Birthday"

Fans will get to watch a special movie featuring clips from White's movies and also some bits from friends including Ryan Reynolds and Tina Fey. 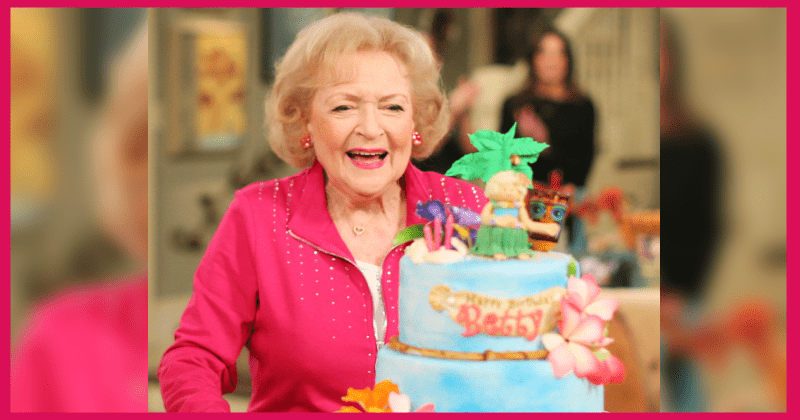 Betty White is about to turn 100 and she's turning up the volume even more. The iconic actor is a national treasure and is showing no signs of slowing down as she plans a grand party for her fans on January 17. She is inviting fans to a special movie event celebrating her life, captioning her Instagram post, "I’m going BIG for my birthday - right to the BIG SCREEN!" The movie titled Betty White: 100 Years Young—A Birthday Celebration will be a tribute to the actor. The movie has been made by Steve Boettcher and Mike Trinklein, and will feature footage of her leading her daily life, and behind-the-scenes footage from sets. The movie will capture the actor at work and at home, including her work as an animal advocate before culminating in her actual birthday party, reported CNN.

The movie also has a star-studded cast and friends including Ryan Reynolds, Tina Fey, Robert Redford, Lin Manuel-Miranda, Clint Eastwood, Morgan Freeman, Jay Leno, Carol Burnett, Craig Ferguson, Jimmy Kimmel, Valerie Bertinelli, James Corden, Wendy Malick, and Jennifer Love Hewitt. The movie will celebrate some of her iconic roles including Rose on Golden Girls, her hosting gig on Saturday Night Live, her Super Bowl/Snickers commercial, and her role as Sue Ann on The Mary Tyler Moore Show. The movie will also highlight some of her stellar achievements including being the first woman to produce a national TV show, and the first woman to receive an Emmy nomination.

Betty White is inviting fans to celebrate her milestone birthday on January 17. "Who doesn't love a party?!? This one is gonna be GREAT!" said White. We really don't need an excuse to celebrate Betty White but we're going to raise the roof on her 100th birthday. Some are even calling for a national holiday to celebrate the actor. She held a birthday bash, inviting just her close friends last year and was as chirpy as ever. A close friend spoke to Closer Weekly. "She still likes to drink, laugh, and tell stories," said the insider. "She still gets job offers, but that part of her life is probably over. Everyone wants her to retire to [her vacation property in Carmel, California], but Hollywood is in her blood. She likes to be close to the action, even at her age," they said.

It was a month ago that Betty White was trending on Twitter and everyone feared the worst. Turns out, it was just people calling for national security to be provided to the actor to protect the 'national treasure.' It all started after @HeyokaEmpath01 tweeted: "Betty White is 99 years old and 3 months away from 100; please provide her with national security protection and wrap her safely in bubble wrap; we love her." Betty White may have cut down on her roles in the past few years, but it has also coincided with the pandemic which shut down productions in Hollywood. She spoke to TODAY about her plans for her 99th birthday, and she was as gung-ho as one can be. "You probably didn't ask, but I'll tell you anyway. What am I doing for my birthday? Running a mile each morning has been curtailed by Coronavirus, so I am working on getting The Pet Set re-released, and feeding the two ducks who come to visit me every day." During the pandemic, White said she had animals and crossword puzzles for company. "The virus is afraid of Betty!" joked White's publicist last year.

I cannot believe that @BettyMWhite Is gonna be 100 in 3 months god bless her and protect her at all cost pic.twitter.com/rbF0mCCodN

I have been informed that Betty White is turning 100 in January. We're all getting the day off as a national holiday I presume. pic.twitter.com/wZUL4WXbc8