Brett Kinloch had a brain tumor that he was fighting for four years. He was admitted to the hospital the same day his wife went into labor and gave birth to their third daughter. 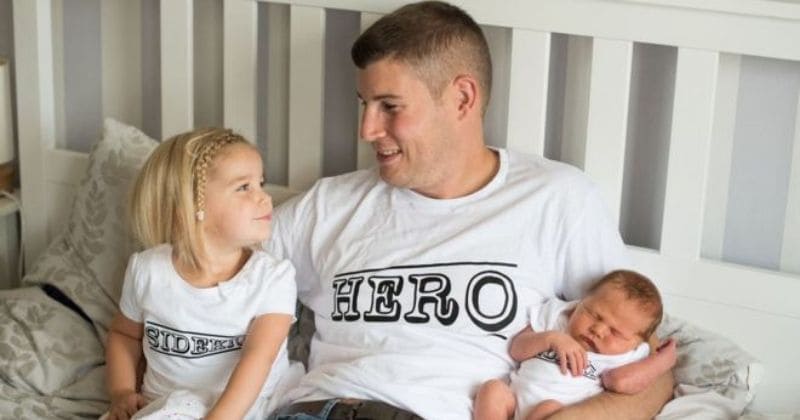 The daily headlines all over the world are always hogged by events that are extremely negative in nature, but once in a while, there are stories that just warm the heart and remind one of the bittersweet nature of life. Brett Kinloch, a PE teacher from Bedfordshire, UK, met his newborn baby, his third child, just three hours before he died reports Leighton Buzzard Observer. Brett Kinloch fought a prolonged four-year battle with an aggressive brain tumor before he breathed his last on February 11 while his wife went into labor the same day. Although he knew that his end was near, he died with a sense of satisfaction and happiness of meeting his youngest daughter. A big part in making the meeting possible was Ben's wife, Nicola, who stood by him through thick and thin as well as all the hospital staff and management who were looking after both Ben and Nicola. Kinloch was a PE teacher at the Milton Keynes Academy where he also met his wife.

Both started their teaching careers at the school back in 2010 and soon friendship blossomed into love.  Born in Northampton, Brett was diagnosed with grade 4 glioblastoma brain tumour soon after the birth of his eldest daughter, Freya who is now 4-years-old. His second daughter Ella is 18-months and they named the youngest one Ariya. Brett was originally given a prognosis of 12 months, however the fighter that he was, he was determined to beat cancer and battled hard to recover.

The first rounds of treatment were done abroad. Things were looking good for the family before they got news that the tumor had come back in a part of the brain that was inoperable. What made it worse is the fact that the news came just before Christmas while the family was expecting their third child, and his health deteriorated further. Despite this setback, Brett continued to be positive.

His wife Nicola said, "Brett never made excuses and he lived life to the full. He was still working three weeks before he died, he wanted to provide for his family." His love for his daughter and the family was also something that never faltered all this while. Nicola further added, "He loved life and he never let [his illness] stop him living. We went on holidays abroad, we took the kids to Disneyland. Even when he could no longer drive, he got a bus pass and would take Freya out." Brett also always remained "positive" and "never lost hope" according to his wife during the entire period of his illness.

Nicola went into labor on February 11. Within 50 minutes after giving birth at the Luton & Dunstable Hospital, she along with her newborn baby and her own mother were on their way to Milton Keynes Hospital where Brett was being treated. Brett was being cared for at home before he was admitted to the hospital. Despite the ordeal, Nicola like her husband too looked at the brighter side of things.

"It sounds horrific, but it could have been a lot worse, she could have been born 24 hours later. I take a lot of comfort in the fact he did meet her. I laid her on top of him and she had a cuddle. He could hear what was going on and he knew we were there, I’ll always be grateful for that." Nicola, however, said that it was "heartbreaking" that a family portrait with all the three girls was not possible. She, however, took heart in that Ariya's older sisters had their memories. At the same time, Nicola acknowledged that the meeting between Ariya and her father would not have been possible without the support from her family, friends and the community at large.

She was all praises for midwives at the Luton and Dunstable Hospital reports BBC. "They were so good at not portraying what was going on - my friend told me they were on the phone to the hospital in floods of tears in the next room," said Nicola. "It was action stations afterward - one midwife was tending to me, another to the baby and my mum went to get the car and we went straight up the M1 and got there super quick."

At the same time, she lauded the National Health Service or NHS  staff. She said, "I can never thank the NHS enough – the call-out doctor called Tim who kept Brett alive, the paramedics that took him over there... there were nurses from all areas of the hospital that just wanted to do everything they could. There was no-one at the NHS who didn’t go above and beyond to help us." There is a GoFundMe page if you want to support the Kinloch family.