Ben Stiller Wants Teddy Roosevelt's Statue To Be Replaced By Robin Williams: "He Deserves One"

Williams incidentally played the role of Teddy Roosevelt in 'Night At The Museum' who comes to the aid of Ben Stiller's character. 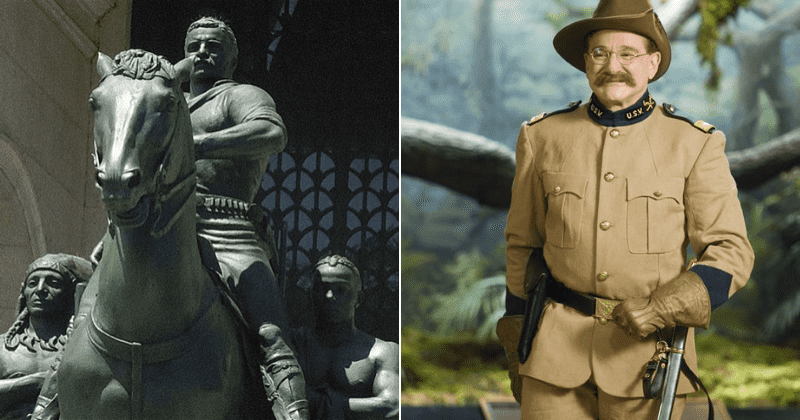 New York City's famous American Museum of Natural History has made the decision to remove the statue of former president Theodore Roosevelt from its entrance. According to the BBC, a great-grandson of the president agreed with the removal, saying it did not reflect Roosevelt's legacy. But President Donald Trump. on the other hand, tweeted: Ridiculous, don't do it! The decision comes as NY Mayor Bill de Blasio said on Sunday, "The museum has asked to remove the Theodore Roosevelt statue because it explicitly depicts black and indigenous people as subjugated and racially inferior."

Actor Ben Stiller has suggested that the 14-foot statue ought to be replaced with one of deceased comedian and actor Robin Williams. "How about replacing it with a statue of Robin Williams. He deserves one," the Zoolander actor wrote in the comment section of a tweet by The New York Times which said, "Theodore Roosevelt's statue will be removed from the Museum of Natural History in New York City. The memorial has long prompted objections as a symbol of colonialism." The tweet also had a link to their article about the removal of the statue made by the board of the museum.

If that's what the people of New York want. They should put up a plaque explaining why the first statue was replaced. Maybe even do a smaller statue of Ben Stiller next to it to commemorate the moment he made the suggestion. They can do all of this without mentioning ol' Teddy!

Stiller is quite familiar with the American Museum of Natural History as he was the leading star in the 2006 fantasy-comedy film Night At The Museum directed by Shawn Levy. In the movie, Stiller plays the night watchman at the very same museum and it was so successful that it spawned two sequels – Night at the Museum: Battle of the Smithsonian in 2009, and Night at the Museum: Secret of the Tomb in 2014 – Robin Williams incidentally played the role of Teddy Roosevelt, who helps Stiller's character understand the secret behind the exhibits coming to life.

The statue of Roosevelt, which is yet to get removed, shows the former POTUS riding on horseback and apparently flanked by a Native American man and an African man. It has been situated over the entrance of the museum for the last 80 years. The decision to remove the statue was proposed by the museum itself and later agreed upon by the NYC council, which owns the building as well as the property on which it has been built. This landmark move comes in the midst of nationwide protests against systematic racism, following the death of George Floyd at the hands and knees of four Minneapolis police officers.

I give it a week pic.twitter.com/JrM0OkGxtg

“Over the last few weeks, our museum community has been profoundly moved by the ever-widening movement for racial justice that has emerged after the killing of George Floyd,” the museum’s president, Ellen V. Futter, said in an interview. “We have watched as the attention of the world and the country has increasingly turned to statues as powerful and hurtful symbols of systemic racism.” “The world does not need statues, relics of another age, that reflect neither the values of the person they intend to honor nor the values of equality and justice,” said 77-year-old Theodore Roosevelt IV, age 77, a great-grandson of Teddy Roosevelt.

NONE of the statues NEED to be moved the people just NEED to be educated. Erasing history only means one thing future generations WILL repeat it

The move was obviously inspired by the heated national debate that is currently raging over the appropriateness of several statues or monuments that were initially Confederate symbols. Several statues of notable individuals like George Washington to Thomas Jefferson have been demanded to be removed from across the country. Though the calls to remove statues in most cases arose from Black Lives Matter protestors, it was the museum itself in this one. “The American Museum of Natural History has asked to remove the Theodore Roosevelt statue because it explicitly depicts Black and Indigenous people as subjugated and racially inferior,” Mayor Bill de Blasio said. “The City supports the Museum’s request. It is the right decision and the right time to remove this problematic statue.”