trending celebrity people lifestyle news animals
Bartender Throws Out 'Peaceful' Nazis Even If They're Not Bothering Anyone, Here's Why

Bartender Throws Out 'Peaceful' Nazis Even If They're Not Bothering Anyone, Here's Why 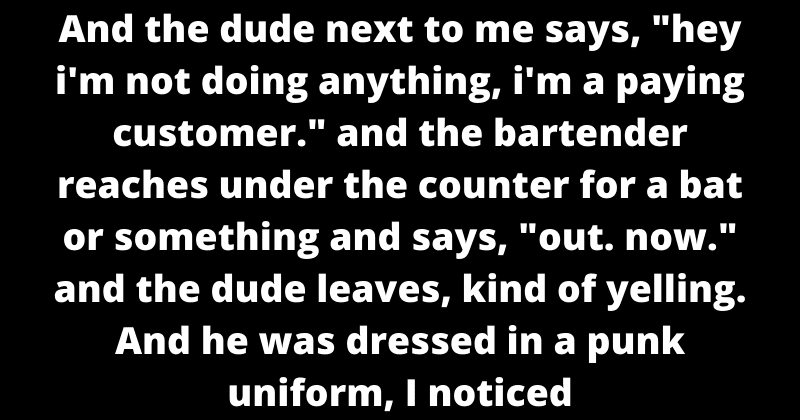 Back in 2017, right-wing figures and several groups supporting the far-right were in rapture over the win of Donald Trump in the 2016 presidential elections. One such figure was a neo-nazi named Richard B Spencer who was being interviewed on inauguration day in Washington DC by a journalist. Prior to this, Spencer had been filmed giving the Nazi salute at a gathering and encouraged others to do so while saying "Hail Trump."

During his interview, he was punched by a man and spat on by another. The video of this became viral. This immediately set off a debate on social media on if it was "Okay to punch a Nazi?" We are in 2020 and the topic is still debated every now and then.

Is it really ok to punch nazis? pic.twitter.com/8w4YYmA81h

One such discussion took place on Twitter when a commenter wrote about an incident when a man who seemed to be supporting Nazism was chased out of a bar by its bartender. Micheal B Tager who goes by the Twitter handle iamragesparkle (@IamRageSparkle) was replying to a post by another person about how the alt-right was weaponizing "free speech ideals" without many realizing it.  Tager recalled an experience he had at a bar.

And the dude next to me says, "hey i'm not doing anything, i'm a paying customer." and the bartender reaches under the counter for a bat or something and says, "out. now." and the dude leaves, kind of yelling. And he was dressed in a punk uniform, I noticed

He wrote he was at "a shitty crustpunk bar" one day after he had just got over with work. Describing the place in not flowery terms, Tager wrote it was, "One of those shitholes where the bartenders clearly hate you."

Tager was going about his own business and so was the bartender with both "ignoring one another." Just then someone sits next to Tager but to his surprise, he is immediately shooed by the bartender who tells the man, "No. Get out." Tager wrote that the man who was being chased say, told the bartender, "Hey I'm not doing anything, I'm a paying customer."

Is it okay to punch a Nazi in the face? Your comments used tonight at 11. https://t.co/okTCy9wXiC pic.twitter.com/I9XfKXOGhr

However, the bartender was having none of it. According to Tager, he "reaches under the counter for a bat or something and says, "out. now." and the dude leaves, kind of yelling." The man was "dressed in a punk uniform." Curious to know why the man had been chased away, Tager asked the bartender what the episode was all about. The bartender replied, "You didn't see his vest but it was all Nazi s**t. Iron crosses and stuff. You get to recognize them."

The bartender then continued, "You have to nip it in the bud immediately. These guys come in and it's always a nice, polite one. And you serve them because you don't want to cause a scene. And then they become a regular and after awhile, they bring a friend. And that dude is cool too."

Germans have an old saw that goes something like: If ten normal people sit down to dinner with one Nazi, when dinner is over eleven Nazis get up to have strudel/coffee in the den & discuss politics... pic.twitter.com/jUqUXcoL3L

The bartender added, "...And then THEY bring friends and the friends bring friends and they stop being cool and then you realize, oh shit, this is a Nazi bar now. And it's too late because they're entrenched and if you try to kick them out, they cause a PROBLEM. So you have to shut them down."

He said further, "Yeah, you have to ignore their reasonable arguments because their end goal is to be terrible, awful people." While it has been a while since their interaction, Tager stated: "I haven't forgotten that at all." A lot of people who read Tager's post thought the bartender did the right thing.

Yep, I worked at one of these bars in the 90's. They are like rats - one shows up and pretty soon your entire bar is full of them. And in that scene, the lines can get really blurry.

Twitter handle @lexasaurusdoom highlighted the same needed to be done in tattoo parlors: This is also true in tattoo parlors. If you don’t shut down any requests for Nazi/white supremacy tattoos then before you know it those are the only customers you’ll have and no one else will go anywhere near you.

Another handle named Chris Koehn wrote: Fair enough, When we encountered nazi skins we would end up in a fight. But when I used to chat about music on Yahoo decades ago, we couldn't just beat the shit out of them. We did, however, end up talking a couple of them out of their nazi bullshit.