Donald Trump And Melania's Son Barron Is 6-Foot-7, Towers Over His Mom In Latest Pictures

The 15-year-old was pictured leaving their Manhattan home with his mother, Melania Trump. They were accompanied by their security detail. 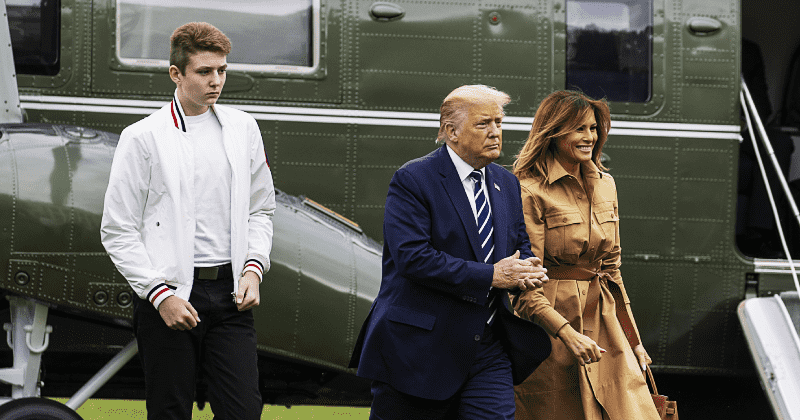 Barron Trump, Donald Trump's son, is the tallest in his family and was seen towering over his mother. The former first son was photographed in New York recently and he was head and shoulders above his 5-foot-11-inch mom, Melania. Barron Trump stands tall at 6 feet 7 inches tall and is already four inches taller than his dad, who's 6 feet 3. The former first lady has been incredibly protective of her son, denying the media any access to Barron Trump. The 15-year-old was pictured leaving their home, Trump Tower, in Manhattan. His hair had grown and was longer than during his time at the White House. He was pictured leaving the building with his Mom, Melania Trump, and their security detail reported New York Post.

Barron Trump is 6'7" — over a foot taller than the average 15-year-old pic.twitter.com/Xm6b0suFWL

He was pictured wearing a dark, long-sleeve T-shirt that was tucked into his jeans. He also appeared to be his mother’s bag for her, a rare Louis Vuitton x Richard Prince bag that cost $3,995 when first released in 2008. Melania Trump was seen wearing a black button-down shirt with white pants that were paired with pointy-toe flats. At a GOP even last month in North Carolina, Trump said he himself couldn't believe how tall Barron Trump was getting, adding that he was the tallest in the family. “Barron is 6-foot-7, can you believe it? And he’s 15,” said Donald Trump. “Eric is short — he’s only 6-foot-6,” joked the former President about his  37-year-old son, who was the tallest in the family until Barron came along.

Barron has been aloof and is rarely seen talking to his family members apart from Melania Trump. One Twitter user wished, "I sincerely hope that Barron is OK, and somehow turns out to be a better person than his horrible family. He has a sweet face, and seems a bit shy, so it must be difficult to suddenly grow into a giant when you don't want attention on you."

It was in March that Barron Trump turned 15, with Melania wishing him a Happy Birthday online by posting an image of two black balloons that made a 15. The family had moved to their Mar-a-Lago Club in Palm Beach, Florida after Donald Trump failed in his attempt to get re-elected, reported PEOPLE. At the time, it was reported that Melania was "checking out a good Florida school for Barron." There has been speculation is Melania lives with her husband or at the resort. "Maybe Melania lives here," said Author Michael Wolff, reported Salon. "For four years in the White House, it was never quite clear how much time she was spending at the White House or in a house in Maryland where she had settled her parents."

Many reports suggested that Melania's main focus was always to protect Barron Trump. "Melania is a great mother and that is her most important role," an insider told PEOPLE. "Barron is the most important thing in Melania's life." There have always been questions over Melania and Donald Trump's marriage and her absence at her husband’s 75th birthday fuelled speculations of a rift. A source close to the Trump family said there was nothing to write about. “Melania is happiest when she is with her own family members, including her son,” they said at the time, reported Yahoo News. “She is not dumb, she just knows how to handle her life to make it as fulfilling for her as possible.”