Joel Ortega shaved his head after he found out that his friend had cancer and was losing hair due to Chemotherapy. 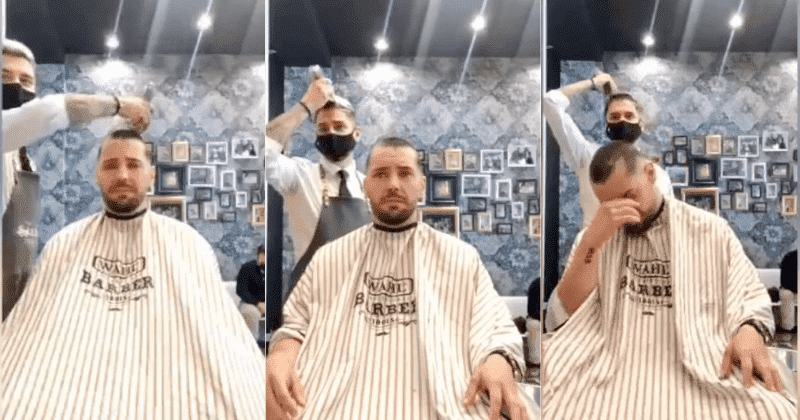 In a heartwarming video, a young man fighting cancer was moved to tears after his colleague decided to shave his head off. In the video, which has been viewed over 10 million times so far, we see Neftali Martin and Joel Ortega, co-workers at the Lords and Barbers barbershop in Alicante, Spain. The clip starts with Martin getting his hair completely shaved because he started losing them due to chemotherapy. Visibly upset, Martins nevertheless, puts on a brave face as Ortega starts trimming his hair using a clipper. Moments later, he is stunned after his friend directs the device towards his own head and begins to shave the hair off. Martin is immediately moved to tears, watching Ortega clip his hair without hesitation.

Neftali Martin and Joel Ortega, much love to you both.

"'You are not alone.' Those were the words of my great friend and co-worker, immediately afterward, he shaved his head telling me that until I grew back he would continue shaving with me," Martin wrote on Instagram. "For those who do not know him, [Ortega] is not just a co-worker, for me a brother. I love you, bro," he captioned the post. The emotional video has won the hearts of millions of people all over the world since being posted over a week ago, with many commending the camaraderie and especially singling out Ortega for taking a brave step for his dear friend. "Huge respect bro. What an appropriation," one user commented on the post. "This man got my respect!! I'll definitely try to be like him!! Whenever someone needs me...", added another.

The post eventually made its way onto Reddit where it garnered over 75k upvotes and more than 1.5k comments. While most of the responses were positive reactions, there were some who questioned the intentions behind filming the scene. "This guy just found out he has cancer and now has to deal with some scumbag barber recording him in probably the most miserable state of his entire life," xd877 wrote.  Scarran6 chose to brush away the cynicism by saying that this was "an amazing show of support for someone starting this long-ass journey." they continued: "It’s difficult starting treatments and feeling like no one is there for you or can even understand your situation. I can see why, for you (someone who doesn’t have cancer) might not understand the gesture, but this clearly meant a lot for him. The impending doom is already enough to surmount. I would have been touched if my barber did this for me and would have lifted my spirits going into radiation."

User Alex Maldini wasn't convinced either and said: "It's a somewhat unpopular opinion but good deeds shouldn't be broadcasted." There were a few who were impressed as well as they felt hair grows back in no time and the gesture doesn't make him look different. However, plenty of people came forward to point out that it doesn't matter if the video was shared online, and said that it is the gesture that ultimately matters. "Seeing people do good things inspires others to do good. It also boosts the morale of those who see it. So while I somewhat agree and do understand where you are coming from, I respectfully disagree. Doesn't matter the intention of the person sharing, it's what it inspires that matters," wrote u/Bun_Bunz. TopTenRubs shared the sentiment with a rather straightforward response. "If clout is the reward that people need to do good things," he wrote. "I really don’t care that’s the way he chose to do it. After seeing people doing fake pranks for the same attention I’ll gladly accept this."

I’m fighting the same battle. This is all someone needs when faced with this situation - empathy and solidarity ❤️