Last year, the Obamas used the occasion of their 28th wedding anniversary to encourage the public to cast their vote in the ongoing 2020 presidential elections. 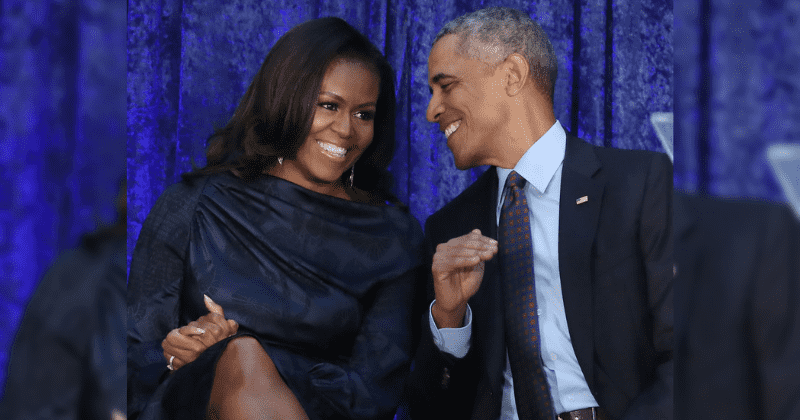 For their 29th marriage anniversary, Michelle Obama posted a touching tribute for her husband on Sunday. The picture featured a beautiful before and after picture of the former first couple, where they can be seen lounging and enjoying some quality time on a couch together years apart. "How it started vs. how it's going. Happy anniversary, Barack—love you! ❤️😘," read the 57-year-old's caption. By the afternoon of the same day, the former President of the United States took to Instagram to express his love for his beloved "Miche." He wrote, "Happy anniversary, Miche! Over the past 29 years, I've loved watching the world get to know you not just as a daughter of the South Side, but as a mother, lawyer, executive, author, First Lady, and my best friend." He concluded the message with an honest and heartwarming confession: "I can't imagine life without you."

Last year, the Obamas used the occasion of their 28th wedding anniversary to encourage the public to cast their vote in the ongoing 2020 presidential election between now President Joe Biden and former POTUS Donald Trump, reports PEOPLE. "This year, we have a request for you — pick one person in your life who might not vote and make sure they do. Tell us about it in the comments! That's an anniversary message of the best kind. Love you, Barack," wrote the author of Becoming. Obama, 60, echoed his partner's sentiments as he shared, "This year, while we appreciate all your well-wishes, what we'd really love is for each of you to reach out to one person in your life who might not vote. Help them get registered. Help them make a plan to cast their ballot. Send them to iwillvote.com to get started. Happy anniversary, Miche. Love you."

The power couple met at a law firm, Sidley Austin LLP, where Michelle, who was 25 at the time, was assigned as his mentor. "Because I went to Harvard and he went to Harvard, and the firm thought, 'Oh, we'll hook these two people up," Michelle told ABC News. "Barack, about a month in, asked me out, and I thought 'No way. This is completely tacky,'" she recalled adding how Obama managed to convince her eventually. "He showed all the sides – he was hip, cutting edge, cultural, sensitive. The fountain – nice touch. The walk – patient," shared Michelle while speaking to The Telegraph. By 1991, Obama popped the big question and they tied the knot on October 3, 1992.

"Barack didn’t pledge riches, only a life that would be interesting. On that promise he delivered," she recalled. Eventually, they welcomed daughters Malia, 23, and Sasha, 20 and Obama gushed about them and his wife. "The great thing about the girls is they've got a wonderful role model in their mom. They've seen how Michelle and I interact — not only the love but also the respect that I show to their mom. So I think they have pretty high expectations about how relationships should be, and that gives me some confidence about the future. I joke about this stuff sometimes, but the truth is they are smart, steady young women," he told Essence.

But things weren't always smooth for the pair who decided to open up about "the hard parts" of their marriage in their respective memoirs. "We didn't have role models of the hard times because our parents, their generation were taught you don't talk about marriage and you definitely don't talk about the hard times," shared Michelle. "So, when you're young and coming up and raising a family together, no one has prepared you for the fact that there will be times when you will have to devote your energies to other things." She admitted that the pair hadn't completely grasped the roots of their tension during his two-term presidency. You don't have that hindsight. You don't have that perspective. All you're doing is getting through," she said.

But "thankfully we had a strong enough foundation," added the mother-of-two. "Before the White House, before the kids, before careers, it was just me and Barack together shaping our lives, building a friendship, being one another's everything. That's what we were able to return to once the White House was over and the kids were grown and you knew they were okay," she shared. Now that they have been married for 29 years, Michelle said the foundation of their relationship "even more solid" especially going through their difficulties. "I am happy to say that I can now look up from all of that and look over across the room and I still see my friend," she expressed.