The dolphin was reportedly "frightened and weak" after it was separated from its mother. 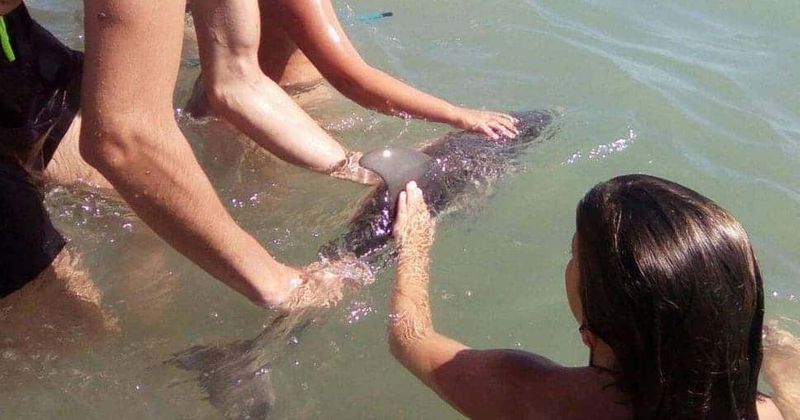 The rush of dopamine for a few likes on social media often pushes people into doing some crazy things, even if they are morally and ethically questionable. While social media has contributed to plenty of positives in the world, it has also caused the slow but sure erosion of the sense of moral and social responsibility people once exhibited. In yet a sad and disturbing story, a baby dolphin has succumbed after being mobbed by tourists looking for the perfect selfie.

Endangered baby dolphin dies after being pulled out of water https://t.co/0ApZmB5RNh via @YouTube

According to Independent, the incident occurred in Mojacar, Almeria - a seaside town in Spain - after the tiny dolphin washed up to the shore due to a huge wave. A marine wildlife rescue group criticized the behavior of beachgoers who failed to alert the authorities in time, which could possibly have helped the dolphin survive. Pictures emerged of people relaxing at the beach, stroking the tiny mammal that was so young it still required breast-feeding. Reportedly, the dolphin was "frightened and weak" after it was separated from its mother in the shallow end. Equinac, a conservation group, was outraged by the incident and released an official statement sharing their thoughts. "Once again we find that the human beings are the most irrational species that exists," the statement began. "Many are unable to feel empathy for a living being alone, scared, starving, without his mother and terrified because many of you, in your selfishness, only want to photograph and touch it, even if the animal suffers from stress."

One of the pictures even showed the dolphin's blowhole covered by a child as he stroked it. Thankfully, a concerned witness called Spain's 112 emergency number to help rescue the animal from the mob. However, it was too late for the calf as they arrived 15 minutes later. By then, the baby dolphin had already passed away. The fact that the death of an innocent animal could have so easily been avoided if only the validation hungry mob were sensitive enough to the baby's situation. Speaking to HuffPost, PETA's UK Director, Elisa Allen, said: "Another victim has been added to the growing list of ‘animal selfie’ fatalities—this time, a baby dolphin. In order to take a photo, these holidaymakers, who should now be locked up, showed a naïve—and ultimately fatal—disregard for life. Dolphins are highly sensitive, self-aware individuals, and one can only imagine the trauma endured not only by this young dolphin, who was misused and prodded like a stuffed toy but also by the grieving dolphin family who was left behind."

"The idea that we deserve access to these creatures’ every waking minute creates a culture in which people get dangerously close to bison and lions, pass around a baby dolphin until it dies, and harass bears." https://t.co/UUXkOjAAUq

This is the second such incident in a very short span of time where an excited mob found a dolphin in an Argentinian beach and proceeded to use it as a prop for a selfie, as per a National Geographic report. Commenting on the incident under a Youtube video, a user named Manuel Rodriques Schmidt, wrote: "God...I am so embarrassed of some people of my own country. Please take note. This isn't the average Argentinian. We are a little bit better than that...this is low culture level people..." On Facebook, where Equinac shared the story, a man named Robert Decker wrote: "It's hard to believe there wasn't one person correcting their ignorant and selfish behavior... they're all stupid. If I had been there I would've went Chuck Norris on their stupid a**. Hope karma gets your sorry excuse for living in this world." Salem B. Sarsour wrote: "Leave the wild animals alone. If you're on the beach and having the urge to pet somebody bring your kid or anything."

WATCH: Baby dolphin dies after beachgoers in Argentina pluck it from the water: https://t.co/cbyeEeFuQMhttps://t.co/ElqLaIuXSy