Gibson's older daughter, born in 2017, previously held the 24-year-old record of the being the longest frozen embryo 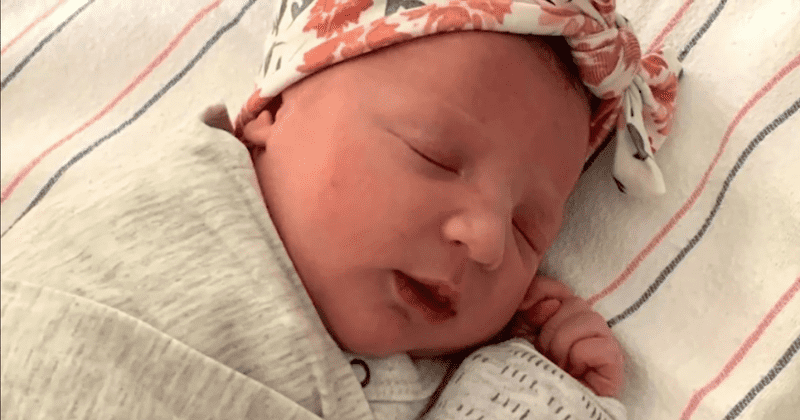 Molly Gibson may be only a month old but in the medical community, she's what one would call a miracle. The tiny tot could have been born any day over the last 27 years as her embryo was frozen in October 1992 and stayed frozen until February this year. Tennessee couple Tina and Ben Gibson decided to officially bring her into the world by adopting the embryo. The baby's birth has shattered all previous records, one formerly held by her older sister Emma for being the longest-frozen embryo resulting in childbirth, reports CNN. Although the Gibsons family isn't one to focus on records, they are certainly stoked with the baby and the title. "With Emma, we were just so smitten to have a baby," Tina Gibson told the outlet on Tuesday. "With Molly, we're the same way. It's just kind of funny -- here we go again with another world record."

Molly Gibson is just over a month old, but could've been born at any point in the last 27 years.

Her birth is believed to have set a new record — one previously held by her older sister — for the longest-frozen embryo known to have resulted in a birth. https://t.co/cs3DBiYEY6

Gibson received both her pregnancy of Emma and Molly through the National Embryo Donation Center, which is a faith-based nonprofit based out of Knoxville that stores frozen embryos that IVF patients decided against using. The center allows families to adopt these unused embryos which are then transferred to an adoptive parent's uterus. The pair's older child Emma, who was born in November 2017, held the record for being the longest frozen embryo to result in birth which was 24 years. The birth of the two Gibson children has opened up a big avenue as the viability of older embryos was not well-known with experts casting doubt over their effectiveness. Gibson, too, was concerned about taking Emma's frozen embryo as she worried that the age could reduce her chances of becoming pregnant.

This record-breaking baby is 27 years old — 2 years younger than her mom https://t.co/878MAMoAcW pic.twitter.com/0WrkuDzTKg

Dr. Jeffrey Keenan, president, and medical director at the organization, however, assured her that age wouldn't affect her chances of bearing a child. In a press release, he added that the birth of the two Gibson children are proof enough that "old" embryos shouldn't be discarded. Carol Sommerfelt, a lab director and embryologist, added: "This definitely reflects on the technology used all those years ago and its ability to preserve the embryos for future use under an indefinite time frame." Speaking after Emma was born in 2017, Sommerfelt said that 75 percent of the donated embryos survive the thawing and transfer process while 25 to 30 percent of the implants become successful.

The second embryo the Gibsons adopted wasn't transferred to her uterus until February and she discovered she was pregnant just before the coronavirus was declared as a worldwide pandemic. Although the world has struggled when it comes to dealing with the virus, the Gibsons were given a lifeline and a new reason to look forward to life in spite of all the doom and gloom. "She's definitely been a little spark of joy for 2020," she said. The baby was born at the end of October and weighed 6 pounds and 13 ounces, and instantly lit up the house upon her arrival. Gibson can't contain her surprise that both the babies are indeed hers. "Every single day, my husband and I talk about it," she said. "We're always like, 'Can you believe we have not one little girl, but two little girls? Can you believe we're parents to multiple children?'"

Crazy!! Congrats to the family.... the baby is perfect!!

In 2017, Mrs. Gibson had told CNN that the couple had struggled with infertility and had given up to find an adoptive child, only to be suggested embryo adoption by her parents, and the rest as they say is history. "You would think that throughout pregnancy that I would just be used to it, but I'm still completely blown away that they are ours," she said. This gives hope to thousands of other couples struggling to conceive due to various reproductive issues. Speaking to WVLT, Keenan added: "I think this is proof positive that no embryo should ever be discarded, certainly not because it is old. This is also a testament to the excellent embryology work of Carol Sommerfelt. She is perhaps the preeminent embryologist in the country when it comes to thawing frozen embryos. And of course, it’s a testament to how good God is, and to His infinite goodness and love."