Woman Gives Birth To Second Child With Husband Nearly 2 Years After Cancer Killed Him: "His Presence Was There"

Larissa and her husband hoped to have a large family before he was diagnosed with cancer. They found a way to ensure they had at least one more child even if it was after he died. 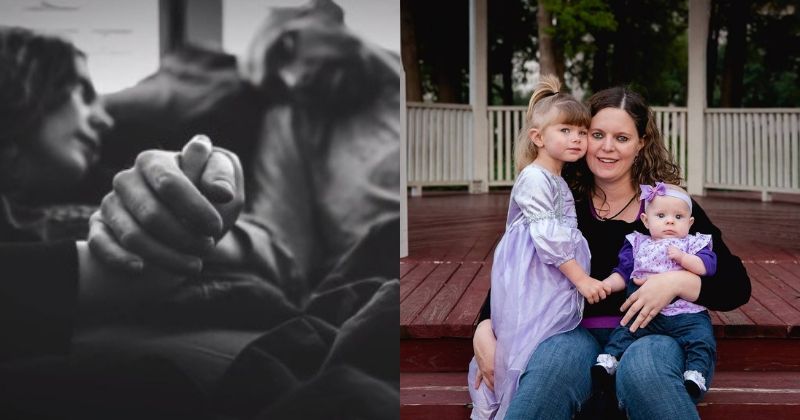 Larissa Fletcher is a pediatrician at theTexas Children’s Hospital. The 38-year-old mother of two from Houston has always loved children. Like some other women who dream of having big families, Larissa too probably envisioned herself living in a house filled with the lively pitter-patter of little feet and innocent laughter as her husband and she looked on. However, fate had other plans for her. In Christmas of 2015, the wheels of her life slowly began to wobble when her husband John Fletcher began to complain of what he believed was bad reflux. He even told Larissa that he should probably consider giving up spicy food. Little did he know that what really plagued him could not be fixed by better food choices. In March 2016, the Fletchers were given the devastating news that John had Stage 4 esophageal cancer. The next day, the couple's first daughter Emma would turn one. At her birthday party, they broke the news of the grim diagnosis to their dear ones.

Larissa recounted what her husband told her soon after the diagnosis to People, “My husband said, ‘I don’t want to die.’ I told him, ‘I won’t let you die.’” This was not the first time esophageal cancer had come for someone dear to Larissa. The poor woman had already lost her father to the same unforgiving disease and had a clear picture of the hard road that undulated before them. The couple had several long chats while coming to terms with his grim diagnosis. All their carefully laid plans had to be redrawn to fit a now uncertain future.

John, a 41-year-old accountant told his wife how he had wished that they had bought more life insurance, even as he held on to the hope that he might just defy the odds and beat cancer. During one of their discussions, Larissa confessed her desire to have more children. Without batting an eyelid, John jumped on board. A week before he was scheduled to begin chemotherapy, he made a trip to The Family Fertility Center at Texas Children’s Pavilion for Women and had his sperm frozen.

“I love babies. I did not ever think my first baby was going to be my only baby. I wanted to have more," Larissa shared. “The worst week of our lives, the week between diagnoses and treatment starting, he went and banked sperm,” she continued. “In that worst, terrible week, he was thinking of the future.” Dr. Paul Zartskie, Director of the Fertility Center recollected how the couple's love for one another during such a difficult time inspired not just him but all his staff too.

“It was amazing that no matter how much pain John was in, and how much suffering he was having, he put this joy of having another child with Larissa as number one," recollected Dr. Zartskie. For a brief moment, it appeared as though the worst was behind them and lady luck was on their side as John's health began to improve. The couple was excited that he was responding well to treatment and started to make plans to go to Maui, where they tied the knot.  “John said, ‘No, no, no, you’ll be pregnant at that point!’” shared Larissa, perhaps wishing they had made the trip because soon things began to take a turn for the worse.

In September 2016, the hospital suggested that they go back home and begin hospice care. Ironically, the very same day they received the happy news that they had five healthy embryos waiting for them at the fertility clinic. John tried his best to fight back, but tragically lost his battle with cancer on October 21, 2016. Determined to honor the plans they had carefully made together in his last days, Larissa began in vitro fertilization (IVF) the next summer. A year after John's death, in October 2017, Larissa was pregnant.

“I wanted people to know the whole story. I didn’t want to say, ‘Hey, I’m pregnant.’ It was a big thing,” shared Larissa who made the announcement in an emotional Facebook video that included John. Larissa was terrified of welcoming their second child together without him by her side. "I was afraid I was going to lose it and bawl over everything," she revealed. John found a way to let her know that she was not alone as she prepared for her planned C-section that was scheduled on July 6, 2018. First, the comforting notes of  What a Wonderful World (one of the songs that played at their wedding) greeted her ears, followed by those of Ain’t No Mountain High Enough, a song John would always sing to their daughter. “His presence was there,” Larissa shared.

Her second daughter, Eliana Joy is now a happy 7-month-old. Even as Larissa continues to adjust to her new life as a single mother, she is intent on preserving the memory of her husband. Once her daughters are tucked in for the night, Larissa spends time putting together a scrapbook that she plans to fill with pictures, memories, and stories for her daughters. “I want my girls to know their story. To know how much I love them, and how much John loved them,” she shared. “While he was sick, we were going to write stories to Emma and this next child. But he got too sick. So now, I’m his voice.” Larissa still wants more children but is considering remarrying first. “Both my girls have a father,” she explained. “I would love for them to have a dad.”