trending celebrity people lifestyle news animals
"Aunt Jemima's" Great-Grandson Angry Her Legacy Is Being Scrapped: "It's Injustice To My Family"

"Aunt Jemima's" Great-Grandson Angry Her Legacy Is Being Scrapped: "It's Injustice To My Family"

Larnell Evans Sr. accused 'white corporations' of making money off of the image of his family's history. 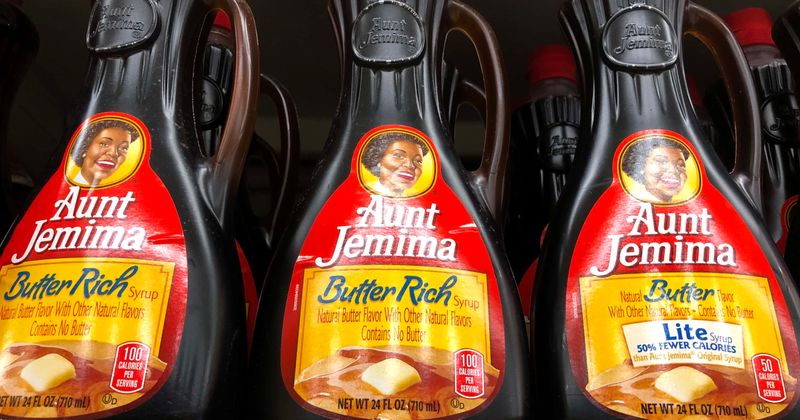 A day after Quaker Oats announced it was retiring "Aunt Jemima" brand, a great-grandson of "Aunt Jemima" protested the decision, claiming the corporation was erasing black history and suffering. Quaker Oats made the announcement in the wake of the protests that broke out across America after George Floyd, a black man, was killed by a Minneapolis cop on May 25. "This is an injustice for me and my family. This is part of my history," said Larnell Evans Sr., a Marine Corps veteran, reported Patch. He accused the corporation of trying to erase slavery after profiting off of it. "The racism they talk about, using images from slavery, that comes from the other side — white people. This company profits off images of our slavery. And their answer is to erase my great-grandmother's history. A black female. … It hurts."

In the wake of the recent protests, the brand announced that it was completely removing the image of the black woman and the name "to make progress toward racial equality." Quaker Oats confirmed the brand will be retired for good. The original "Aunt Jemima" was a formerly enslaved woman Nancy Green, who worked as a cook. Quaker described her as a "storyteller, cook, and missionary worker," omitting the fact that she was born into slavery. Nancy Green was first hired to serve pancakes at the Chicago's World's Fair in 1893, the first time the brand name was used. She wore an apron and headscarf while serving people at the fairgrounds known as The White City. She passed away in 1923.

Anna Short Harrington, who Larnell Evans Sr. claims was his great-grandmother, stepped into Green's shoes in 1935, embodying the brand as "Aunt Jemima." Harrington worked as a slave and was bought by a white family to be their maid in 1927. A Quaker Oats representative saw her serving pancakes at the New York State Fair and decided to make her "Aunt Jemima." Her image was used product and advertising. Larnell Evans Sr. and a nephew sought $3 billion from Quaker Oats, claiming the brand had adopted her pancake recipe. Their demand for royalties was scuppered after the Federal court ruled that they were not executors of Harrington's estate, which made them ineligible to sue in her name.

"She worked for that Quaker Oats for 20 years. She traveled all the way around the United States and Canada making pancakes as Aunt Jemima for them," said Evans. "This woman served all those people, and it was after slavery. She worked as Aunt Jemima. That was her job. … How do you think I feel as a black man sitting here telling you about my family history they're trying to erase?"

Quaker Oats acknowledged that the brand's origins are based on a racial stereotype while making the announcement.  "As we work to make progress toward racial equality through several initiatives, we also must take a hard look at our portfolio of brands and ensure they reflect our values and meet our consumers' expectations," said Quaker Oats in a statement. Evans says it's not right for corporations to make money off racial stereotypes and images before just moving on. "How many white people were raised looking at characters like Aunt Jemima at breakfast every morning? How many white corporations made all the profits, and didn't give us a dime?" said Evans. "They're just going to erase history like it didn't happen? ... They're not going to give us nothing? What gives them the right?" asked Evans. After making millions off the brand, Quaker Oats announced that it was setting aside $5 million over the next five years to help "create meaningful, ongoing support and engagement in the Black community."