Arnold Schwarzenegger Slams ‘Patriots’ Who Don’t Visit Veterans’ Graves: "They Made America Great, No One Else"

The former Governor of California believes not enough people are paying tribute to the fallen. 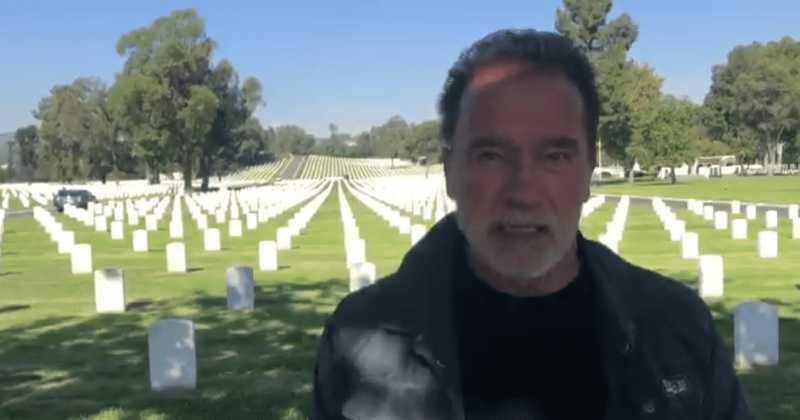 Arnold Schwarzenegger is disappointed to see very few people visit the graves of fallen soldiers this Veterans Day. The former Governor of California opened up in an emotional video saying not enough people are paying tribute to veterans. The video was put up after the Terminator actor visited an almost empty graveyard for veterans in Los Angeles on Wednesday, Nov. 11, reports ET Canada. He pointed out that as an immigrant, he owes much of his success to veterans. The 73-year-old actor was surrounded by tens of thousands of gravesites, only about 20 came to visit. He urged more people to visit grave sites on next year’s Veterans Day.

That's so true! I hadn't thought about this. Thank you for making this point.

According to UNILAD, November 11 is known as Remembrance Day in the UK and Veterans Day in the US. It's a day to celebrating and honor all US citizens who’ve served in the Armed Forces. And since not many people turned up to honor fallen soldiers at their graves, Schwarzenegger expressed his sadness in one of the two videos he posted on social media, saying, " I just came back from [the cemetery] and I did the first message. Then when I came home, I said to myself, ‘It doesn’t make any sense that in this cemetery where there were almost 100,000 people buried, veterans, there were only like 20 people walking around. But then the people, 20,000 or so, go to a political rally where someone promises them to make America great. But the fact of the matter is, those veterans are the ones who made America great, no-one else." He also said that he hopes to see those 20,000 people who claim to be "so patriotic… I think it’s a discussion that we should have, the definition of patriotism, let’s talk about it."  Schwarzenegger is a registered Republican but it's pretty obvious that he isn't too happy with Donald Trump's presidency. In his first video, he thanked those who fought to make America the "freest country in the world, and the greatest country in the world. Without them, we would not be such a fantastic, great nation. I mean, there’s a lot of people that claim they’re responsible for making it the greatest nation – for instance, politicians. But that’s all a bunch of nonsense.'" The men and women who sacrificed their lives are the "true action heroes", he said, adding, "From this immigrant, I owe everything to you, everything that happened in my life, all my successes, it’s because of you. Thank you."

Schwarzenegger has previously brought up his stance on the current state of politics in the country. As well as people's needs of politicizing of things that needn't be so. Masks, for one. In June, California Gov. Gavin Newsom made it mandatory for residents to wear masks while in public. "Simply put, we are seeing too many people with faces uncovered, putting at risk the real progress we have made in fighting the disease," Newsom said, according to CNN. The actor backed the Governor, with a tweet, bluntly saying: This is 100% the right move. This will help us beat this terrible virus. The science is unanimous - if we all wear masks, we slow down the spread and can reopen safely. It’s not a political issue. Anyone making it a political issue is an absolute moron who can’t read.

It's sad that the government has to mandate it instead of people being courteous.

The actor also puts his money where his mouth is and helped others during the coronavirus pandemic. According to PEOPLE, the actor donated $1 Million to COVID-19 medical supply relief. He shared a screenshot of a GoFundMe page he helped co-create called “Frontline Responders Fund,” meant to provide medical professionals with critical supplies such as masks, gowns and gloves. In an Instagram post, he wrote:  I never believed in sitting on the couch and complaining about how bad things are, I always believed we should all do our part to make things better. This is a simple way to protect our real action heroes on the frontlines in our hospitals, and I’m proud to be part of it. I donated 1 million dollars, and I hope that all of you who can will step up to support these heroes.  So far it has raised $8,257,080 of its of $10,000,000 goal.

Arnold Schwarzenegger Donates $1 Million to COVID-19 Medical Supply Relief: 'We Should All Do Our Part' https://t.co/AFyuN6UvF6