Reverend George Rutler has denied the sexual assault allegations and has stepped aside from the parish, and is currently not serving as a priest. 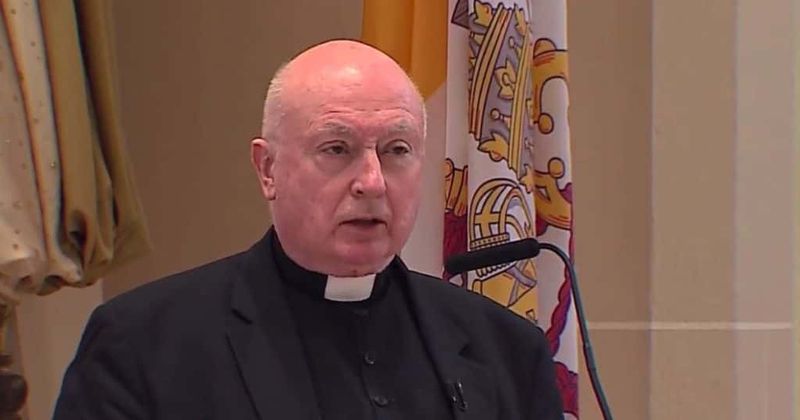 Trigger Warning: This article contains details of sexual assault and homophobia that readers may find disturbing

Religion has always had strong remarks and stances on sexuality and culture. What is considered the norm is often shaped by religious beliefs, and that has led to many a conflict between people for centuries now. One of the more well-known disputes is the notion of homosexuality, same-sex marriages, and other related topics when viewed from a religious or orthodox point of view.

Ashley Gonzalez, a 22-year-old who worked as an overnight security guard at St. Michael the Archangel Church on West 34th Street in Manhattan, is calling for the arrest of 75-year-old Father George William Rutler. https://t.co/gsXLzJ5dmt

A Catholic priest in New York City has been accused of sexually assaulting a female security guard after he was allegedly caught viewing gay porn on his phone. 22-year-old Ashley Gonzalez, who worked as an overnight security guard at Church of St. Michael the Archangel on West 34th Street in Manhattan stated that 75-year-old Reverend George Rutler had assaulted her after she walked in on him watching gay pornography, News 12 reported. This alleged assault took place on November 4, which was Gonzalez's second day on the job. According to her testimony, the nationally prominent priest was watching an adult film in the church rectory on an office computer. Gonzalez claimed that she saw glimpses of two men performing oral sex on each other and then took out her cellphone to start filming.

The 18-second video that Gonzalez recorded was obtained by the outlet as it showed a bald man on it, presumed to be Rutler. He was "seen sitting under several religious icons watching porn on a computer with his hands down his pants," she said. She later recalled with the news outlet: "He looked at me with a smile, looked away, and he put his hand inside his pants, and he was playing with himself.” Just as Gonzalez tried to leave, Rutler immediately slammed the door shut, according to her. “He aggressively threw himself on me and grabbed me sexually, aggressively, and I was fighting him off of me.” “That was the scariest part too. I had no one to help.” She stated that she managed to escape after the priest allegedly groped her breast.

Fr. Rutler’s denial unintentionally reveals a very disturbed man. The denial is abusive and manipulative. Ms. Gonzalez is the victim & the Church needs to pray, love and protect her. Failing to do that re-victimizes her and others who have been abused in the Church. Pray for her.

She went on to accuse the pastor over the entire incident, and it definitely stemmed public interest due to his stance against LGBTQ+ rights. Rutler had staunchly condemned "abortionists and the sodomites", and also denounced Pope Francis, who called for civil union laws to protect same-sex couples. Gonzalez contacted Black Ops Private Investigators to file a police report for forcible touching. Enough proof has been gathered and the investigators are now calling for Rutler's arrest. Black Ops Private Investigator Manuel Gomez said of Rutler: “Why is he still here? He should not be here. He is a threat to the parishioners.”

It is devastating to read that she doesn’t feel comfortable to go back to church. What a horrible scene.

Joseph Zwilling, the Archdiocese of New York, issued a statement, saying: “Although Father Rutler has denied acting inappropriately with the security guard, he voluntarily stepped aside from the parish, and is currently not serving as a priest.” On November 20, Rutler penned a letter to his parishioners refuting Gonzalez’s claims. He wrote: “I strongly deny this allegation, which I maintain is incoherent and painful to my reputation and inconsistent with how I have conducted myself in 50 years of ministerial service without any accusation of misbehavior.” He stated in his letter that no charges have been brought against him, and urged his congregants to "ignore any misleading accounts should they appear in the media". Gonzalez, meanwhile, told the news outlet she lost faith in the church following the incident. “I was raised to respect them and look up to them, and now I’m disgusted.”

Fr. Rutler’s denial unintentionally reveals a very disturbed man. The denial is abusive and manipulative. Ms. Gonzalez is the victim & the Church needs to pray, love and protect her. Failing to do that re-victimizes her and others who have been abused in the Church. Pray for her.