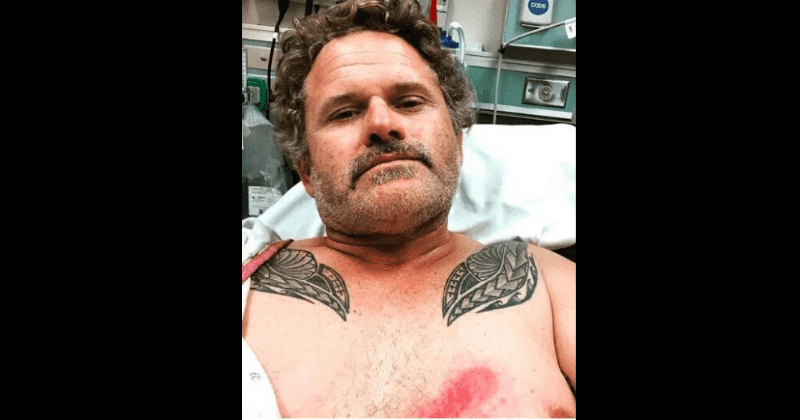 Trigger Warning: The story has details of police brutality that some readers may find disturbing

A veteran anti-apartheid activist and former spy in the Nelson Mandela government was injured during a BLM protest in Los Angeles when he was hit with two rubber bullets fired by police.  While one hit Bradley Steyn in his thigh, another grievously injured him and struck his scrotum rupturing one of his testicles reports Spectrum News11. Now, he plans to sue the Los Angeles Police Department (LAPD) for the suffering he went through.  Steyn was at the protest on May 30 at the Fairfax district of L.A. which he claimed was largely peaceful till the police showed up. In an interview with South African's Newzroom Afrika earlier this month, Steyn said that the violence he witnessed that day at the hands of police reminded him of violence in South Africa.

When asked by the host of the channel how he was feeling, Steyn replied, "I'm sore. I am sitting here with severe damage to my scrotum" adding that he had also been hit by a baton across the chest during the protest. He called the police action highly "unprofessional" especially considering that it was more or less a "pretty peaceful demonstration from what I saw." He also said it was the police who escalated the violence and people were "outraged and got pissed." Steyn emotionally spoke of his life in South Africa and taking part in anti-apartheid protests, and compared it to the situation in the US now. "Growing up in South Africa, we were exposed to terrible violence and protests and police brutality."

LAPD shot my client Bradley Steyn, anti apartheid and #BLM activist, with a rubber bullet to his scrotum, rupturing his testicle.

We will fight for justice for Bradley and several other police rubber bullet victims I represent, who were also maimed.https://t.co/BLneq9p537

He added, "Here, in the land of the free and the home of the brave, I thought that I could take my 10-year-old daughter to a protest and show her that you need to stand up to governments and authorities that abused their power." Steyn thankfully changed his mind about taking his daughter at the last moment and left her at home. Talking about the events that led to his injury, Steyn said he joined the BLM movement at the Fairfax district where speakers were talking about the tragic deaths of George Floyd and "so many other Black people in the United States." The peaceful protests then continued down the road near a popular shopping center called "The Grove." The protesters stopped once again. Police were now on the fringes. Steyn did admit there were a few people who claimed to be protesters who were using hammers to break into shops and were hitting police cars.

Ms Bloom - Your work & that of other lawyers is greatly appreciated with #BlackLivesMatter activists. We wish Mr. Steyn a full and speedy recovery.
Do check in with South Africa though on all the claims in your first sentence. We recently had to call De Klerk to order, so...

Shots from rubber bullet guns were then fired and Steyn ran for cover. He did not expect the way the police acted and "how unprofessionally and brutally violent they got." He said they even began to beat girls and boys as young as 17 who came out to protests "out of the goodness of their heart." He was assaulted when he tried to save one such young woman from being beaten by placing his body as a barrier between the police and the girl. After being hit with the baton, the cop shot two rounds at a point-blank range that injured him. Steyn managed to run away but fell unconscious due to the pain. The next thing he remembered was "somebody pulling on my shirt and rocking me." When he woke up, he saw blood running down his leg from his genitals and was very sore. It then took him around 45 minutes to go to a hospital for emergency surgery.

that's nuts! Takes balls to do what many activists do.