The zoo is in a derelict condition and there are no obvious signs that anyone has even been in its vicinity for days. 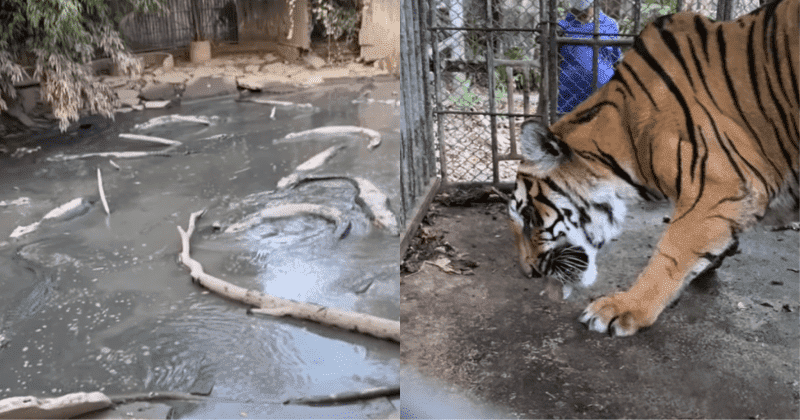 The pandemic is not a pretty sight, be it for us humans or for the animals under our care and protection. In an effort to self-preserve, many people will often abandon or neglect animals so that they may take care of themselves, but that doesn't make them necessarily right. People tasked with the specific mission to ensure that animals in zoos and other wildlife protection zones were still being watched over and fed would be able to continue their work if they were also compensated with medical aid during these unsettling times.

A video shot in a zoo in Thailand showed various animals including tigers, bears, and alligators left for dead due to the Coronavirus pandemic. The tourism industry all over the world has definitely been brought to a sudden halt but the animals who played a major role in that have also been abandoned. The clip was originally uploaded on YouTube and was shot at the Phuket Zoo by an Australian named Minh Nguyen, who lives and works in Thailand.

This makes me SICK! Phuket Zoo abandoned 1000 animals not telling a soul & this guy broke in to feed these starving tigers w some meat from grocery store. Tigers, elephants, jaguars abandoned in tiny cages. Listen to the tiger scream in hunger. Share this! https://t.co/Db1iqnduPG pic.twitter.com/ujG7p8BJzb

Nguyen explained in some distress that he had come across this shocking sight when he and a bunch of his friends had just gone out for a walk. They decided to head to the zoo for some laughs and quiet time with the animals but what they saw truly upset them. "We got in there for a bit of a laugh, and thought we were going to come across some healthy animals," he said. "Initially we saw about a dozen alligators, crocodiles or whatever they are in the confinement... but as we moved on we came across a second [pen] and it was a bit disturbing." "We could see there was a bit of a situation. These alligators had been left for dead...they were just in s**** conditions."

The entire zoo was in a very shoddy state with leaves strewn everywhere and no sign of maintenance, the Sun reported. The water in which the alligators were swimming almost looked like a sewage pond with stagnant black water. The video continues to show a terrified tiger carefully observing these new visitors. "From the corner of my eye, I saw a tiger...it was hiding itself," Nguyen said. "It was basically scared of humans."

Lots of people campaigned for tourists to not visit zoos. But what happens to the animals if you do that overnight? This 👇
🔶 Animals at Phuket Zoo left abandoned & starving https://t.co/ajjBx71WOo
🔸Phuket Zoo files to officially close https://t.co/BEUu8lcrcX #Thailand pic.twitter.com/7FencRsDYQ

In another clip, the tiger was shown to be emaciated with its spine jutting out of its back. As it was howling in pain, Nguyen said, "this tiger is dying," before adding that its screams were so distressing that it gave his friends nightmares. Nguyen and his friends returned to the zoo the very next day to feed some of the animals. They discovered that a zoo staff member was there and was disheartened to hear that the zoo was abandoned due to the cost of the upkeep of just one animal.

"If you want to give the tiger food, give money, about 7,000 baht and that will buy 50 pieces of chicken – that would feed one tiger for one day," he explained. Nguyen has set up a GoFundMe page to raise money that would go towards the welfare of the animals and insisted the video was not meant to raise a mob against the zoo owners. "I just want to say we're not here to create hostility towards the Zoo owners or point any fingers about who did what," he wrote. "Our purpose and end goal is to save the animals and have them rehabilitated/rescued safely."

Horrifying scenes inside abandoned Phuket zoo where starving animals are forced to live in squalor https://t.co/UFL4Z6P8Fu

Luckily, the page has already raised over $36,000 with Edwin Wiek, Founder at People and Animals Thailand, warning people that they were donating to private people who "are not owners of the tigers, and have no legal access to the tigers or are involved with the rescue of these tigers."  "The tigers will not be released by the owners to anyone, authorities will check on the tigers and other wildlife later today but have said they will not confiscate or ask for a handover. Owners have said they will keep the tigers for a newly build a zoo on Phuket," Wiek added.