Animal Hospital Pelted With Fireworks Terrifying The Dogs And Cats Inside

Footage taken by one staff member inside showed fireworks being launched at the building and the police car outside. 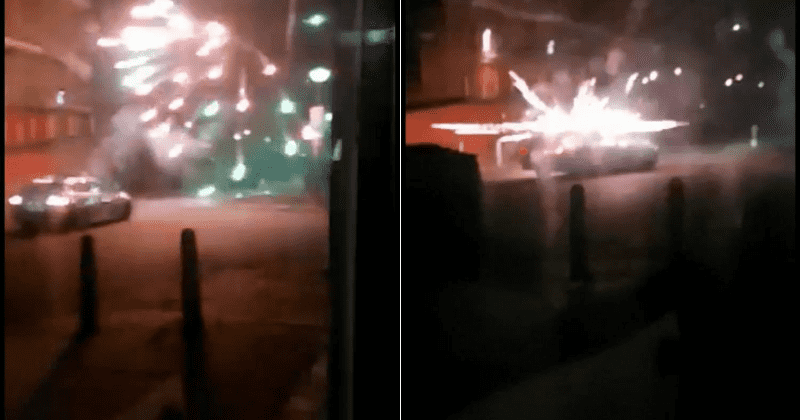 Hooligans and troublemakers often know no bounds to their mischief, and it sometimes gets to a point where it's far from a harmless prank. The worst kind of incidents always involves fire or electricity or other potentially dangerous elements. An animal hospital in Finsbury Park, north London was reportedly pelted with fireworks by a gang of local youngsters. The animal carers were utterly terrified at what was happening and had to barricade themselves inside the building and see to the animals, who were obviously getting traumatized by this. The area's police department also got caught in the firing line as they responded to distress calls at RSPCA Harmsworth Animal Hospital, Metro reported.

Limit the Sale and Use of Fireworks to Organisers of Licensed Displays Onlyhttps://t.co/PVGkT9vigl

One of the hospital's staff members managed to capture some truly dramatic footage showing the fireworks being launched at the building and the police car outside. "It’s like something out of a war zone," she is heard saying. As the attack continued and the fireworks kept bursting around, the frightened animals had to be immediately moved elsewhere in the hospital. There were a large number of sickly pet dogs and cats at the hospital.

It's absolutely horrendous. What kind of upbringing do kids have to even think about doing this? Animal welfare should be taught in schools, from nursery onwards. It should, of course, be taught at home but, if parents aren't doing it, schools should.

An RSPCA spokesperson said: "Our dedicated workers at Harmsworth Animal Hospital are trying to continue to care and treat animals during the challenging times of lockdown and they should be able to do this without fear for themselves or the animals. Fireworks have been going off in this area during the week upsetting the dogs and animals in the hospital, and staff also reported sparks visible in the branches of the trees close to the hospital. We had one particularly horrible incident where fireworks were launched at a police car right outside the hospital."

Total waste of spaces and air we breath! What stupid imbeciles!! Ban fireworks, because the dumb few, just ruin it for all!! 🤬🤬🤬
I really hope all staff are ok, and all the animals are safe! 🙏 #BanTheFireworks #banfireworks

According to the Mirror, the hospital went on to post the footage of the fireworks attack on its Facebook page, saying it had been having a "terrible" time. The hospital wrote: "Our poor patients are left terrified every year because of the sale of fireworks to the public. Over the last week in particular, we have had a terrible time with gangs of youths clashing with the police right outside our doors. Fireworks are being aimed at buildings and police, causing much disruption to our poorly patients, who are safe inside our building, but distraught. It is also hugely upsetting for our staff. We are asking clients who need to visit the hospital to collect medication, for example, to try and do so before it gets dark over the next few days by appointment only."

And they wonder why we want them to be stopped, sold only for displays. Its rural where I am but a house not far away did over 4 hours of "World War" displays, it was the worst I've known, I had petrified Animals. This disgusting behaviour is not acceptable, poor staff+Animals.🤬

They continued, "This anti-social and dangerous behavior is obviously unacceptable but, as well as this, lockdown measures this year also mean that very few organized, public displays are likely to go ahead."  They added, "We suspect this will mean people will have their own displays at home instead and we fear that this will result in lots of little displays taking place over a few weeks, spreading out fireworks noise and causing prolonged distress for animals. Fireworks are extremely stressful and frightening for lots of animals. But they can also cause very serious injury and even death to some."

And why punishment for criminal acts like these should be severe.

As per UK laws, attacks from fireworks can carry a fine of up to £5,000 ($6,500) or imprisonment of up to six months. The law clearly says you must not set off or throw fireworks (including sparklers) in the street or other public places. Furthermore, there is a strict ban on fireworks between 11 pm and 7 am, except for Bonfire Night, when the cut off is at midnight. In the case of New Year's Eve, Diwali, and Chinese New Year, the cut off is 1 am. The country has long had reports of common injuries from burns that were caused by hand-held fireworks, including sparklers. People are also injured by projectiles fired from fireworks, often due to incorrect use. Other issues include the dangers of falling rocket sticks, especially from larger rockets containing metal motors.