The man explained how he could no longer trust his wife's parents with their son. He decided that his in-laws could see their grandson only if they were present 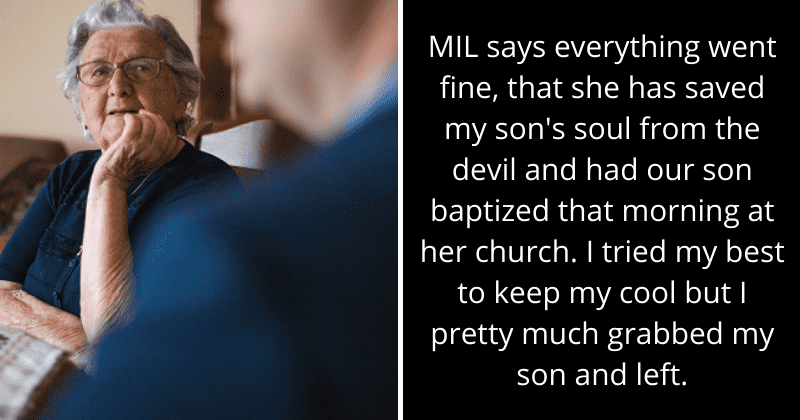 In most cases, it is the children who need adult supervision to behave themselves and not get into trouble. However, this Reddit user has a unique problem. u/nobaptismahole thinks it is his in-laws who need to be supervised while spending time with his son. Taking to Reddit's AITA subreddit he explains how. When the Reddit user and his wife went on a weekend getaway to celebrate their wedding anniversary, they decided to leave their two-year-old son in the care of his in-laws. Little did he know they would go behind his wife's and his back to get their son baptized, even when they knew it was not something they wanted.

In the post, he wrote: I was raised Lutheran and my wife was raised Catholic, but neither of us currently go to church and have not had our son baptized. My MIL knows this and hates it. She thinks our son needs to be baptized or he will burn in hell, she's that kind of catholic. So we go on our trip and when we pick up our son and ask how the weekend went, MIL says everything went fine and that she has saved my son's soul from the devil. I ask her what she meant and she says she had our son baptized that morning at her church. I tried my best to keep my cool so I didn't scream at MIL in front of my son, but I pretty much grabbed my son and left.

When he tried to broach the subject with his wife, in the car, she surprisingly took her mother's side and tried to downplay what had been done. Fuming, he told his wife that this would be the last time her parents could be with their son unsupervised. Things got more heated when they got home. I told my wife I no longer trust her parents with our son and that if they did something like this behind our backs I can't trust them to respect our wishes as parents in the future, he wrote and continued, I told her that under no circumstances will I allow her parents to watch our son by themselves again. I said that we can still let them see their grandson, but only if we are present. I also said that if she doesn't see what the big deal is with this situation, that maybe we aren't on the same page as parents and maybe we need to see a counselor.

The man's wife called him a jerk for trying to dictate her parent's relationship with their son. However, he had decided that what his in-laws had done was unforgivable, and "this is a hill he's willing to die on." Redditors offered the man their thoughts.

NoxWild, who didn't think the OP was a jerk had this to say: Your wife is downplaying her mother's actions when she should be standing up next to you as half of a united couple. Your wife is deliberately closing her eyes to what's happening and is putting your marriage in jeopardy by trying to say this breach of trust was no big deal. Your MIL's actions weren't about her concern for your child's soul; it was all about a power play and interfering in your marriage. Your wife is playing her part well, of being the apologetic, excuse-making, enabling, and compliant little girl who doesn't want to make Mommy mad.
Suggestion One: Make that marriage counseling appointment and keep it.

Suggestion Two: Contact your MIL's church and speak to the priest who performed the baptism. Go in person. Explain how MIL went behind your back. Ask why the church allowed this to happen without the consent of the child's parents. Tell the priest you are a Lutheran and you are furious with MIL. Tell him there is zero chance your child will be raised as a Catholic. Tell him MIL is untrustworthy. Ask him what action, if any, he plans to take. Suggest he speak to MIL about her deception and suggest he offer her some guidance about honesty and noninterference. You want this priest to go to MIL and explain what she did was wrong. You want MIL to know you told her priest about her sneaking and smugness.
Suggestion Three: Stick to your prohibition on leaving your child alone with MIL. She'll start indoctrinating him as soon as she can by teaching him prayers and rituals. She can never be trusted again, because her excuse is "I know better than you how to raise this child."

On the flipside, while most Redditors did not think OP was wrong, ShadowsObserver stated: Going against the grain here apparently, but YTA. Was what your MIL did wrong, a huge breach of trust, and something to be discussed? Yes, absolutely. Did it actively hurt your child in any way? No. I get it's an issue with respecting your choices as parents, but YTA because you're now trying to make unilateral decisions about whether your partner's mother can see your child, without considering your partner's feelings on the situation and the effect your decree (yes, decree) will have on her and her familial relations. She's right, you're an asshole for trying to force this decision on her on your own. This is something you and she need to agree upon, and you're telling her it's your way or the highway - and guess what, if she chooses the highway, your son IS going to see your MIL unsupervised whether you like it or not.