Anderson Cooper Shares Adorable Photo Of His Son Smiling: "He Is Such A Happy Baby "

Cooper welcomed Wyatt Morgan Cooper back in April via surrogacy 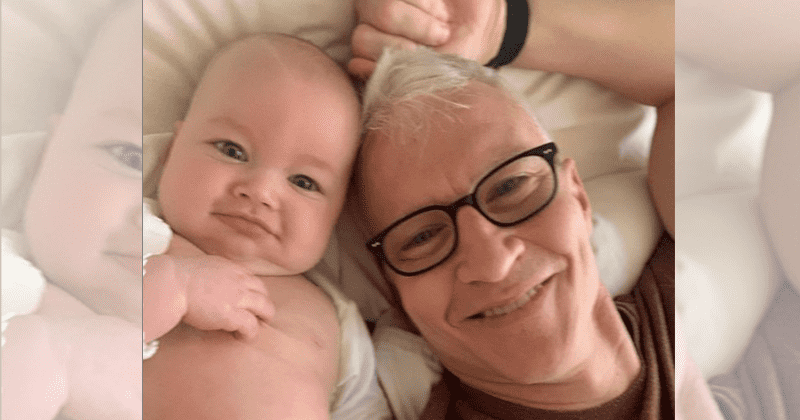 CNN's Anderson Cooper, 53 shared a cute selfie with his son, Wyatt Morgan Cooper. The picture shows the bothe of them casually lying on a bed together as they smile for the camera. Cooper's ridiculously cute son has his hand on his chest and beams an angelic smile and poses for the picture-perfect shot. His father is in a brown round neck t-shirt and has his signature black spectacles. Anderson wrote a touching caption with the picture about his son turning "five months old in less than two weeks," and called him "such a happy baby even though he has started teething." Cooper further revealed how Wyatt loved to read; with his favorite author being Dr. Seuss "particularly One Fish, Two Fish, Red Fish, Blue Fish. Ok, that’s my favorite, but he does seem to like it a lot."

The anchor opened up about being a father and how his own parents inspired him to become one in an interview with PEOPLE. He welcomed baby Wyatt via surrogate back in April 27. "I feel like the spark of recognition between my mom and my dad that occurred had these two people who were from completely different walks of life. My dad grew up very poor in Mississippi; my mom, obviously, grew up the way she did. [So to] have them meet and fall in love and create a family of their own and have this little family of ours ... it made me really sad to think that I'm the only person left from that union [of my parents] and that I'm the only person left who remembers all those stories of my mom, my dad and my brother," he said. Cooper is the son of socialite and fashion heiress Gloria Vanderbilt and author Wyatt Emory Cooper.

Brought me to tears.
Holy cow, such beautiful words from the heart...
Welcome to fatherhood @AndersonCooperpic.twitter.com/xc3S04llUH

He added, "I wanted to have a child who came from that and grew up knowing about that. That's why I chose to do it the way I did it." Cooper said he planned to raise the baby with his ex-partner, Benjamin Maisani as a co-parent. "I was incredibly lucky to be able to do this. [The surrogate] is an amazing person; her husband, too, is incredible. That she is willing to do this, to enable families who can't have a child to be able to have a child, is an extraordinary gift," Cooper added. Since becoming a father, Cooper has often shared pictures of him and his son on the picture-sharing platform. When he first welcomed Wyatt, he shared a long post and a picture of him feeding his baby. "He is named after my father, who died when I was ten. I hope I can be as good a dad as he was," he wrote.

He added, "As a gay kid, I never thought it would be possible to have a child, and I’m grateful for all those who have paved the way, and for the doctors and nurses and everyone involved in my son's birth. Most of all, I am grateful to a remarkable surrogate who carried Wyatt, and watched over him lovingly, and tenderly, and gave birth to him. It is an extraordinary blessing - what she, and all surrogates give to families who cant have children. I do wish my mom and dad and my brother, Carter, were alive to meet Wyatt, but I like to believe they can see him. I imagine them all together, arms around each other, smiling and laughing, happy to know that their love is alive in me and in Wyatt, and that our family continues."

oN July 14, Cooper uploaded a snap of him carrying baby Wyatt in his arms in a nappy. The picture was shot outdoors. He captioned this picture with details of his baby's general health and well being. Wyatt was 10-weeks-old then and said he was "doing great." He also revealed his son liked among various other things, "naps and milk, bath time and being read to." He also thanked his well-wishers for "all your lovely cards and messages!"