New Dad Anderson Cooper Is Now A Completely Different Man: "I Thought I'd Never Have A Kid"

The CNN anchor opened up about co-parenting with his former partner Benjamin Maisani, 47. 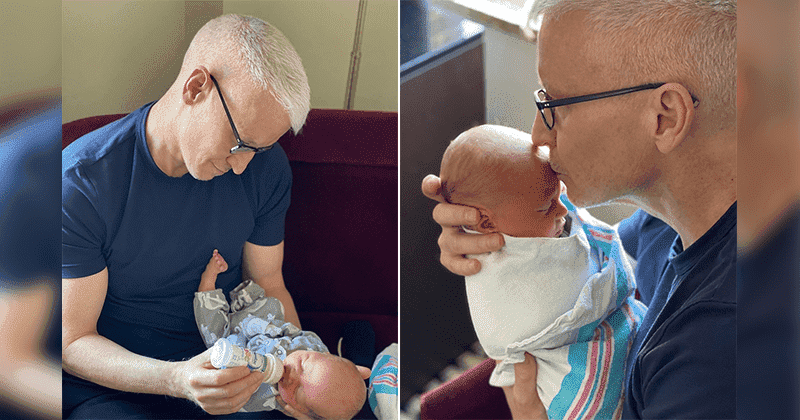 When Anderson Cooper is in front of the camera, he's a serious journalist. Behind it, he's a doting new dad. Back in April, the anchorman on Anderson Cooper 360° revealed that he had become a father to Baby Wyatt. He's co-parenting with his former partner Benjamin Maisani, 47. The 53-year-old confessed to PEOPLE that the experience was something he never thought he'd have. “When I was 12 years old and knew I was gay and thought about my life, it always upset me because I thought, ‘I will never be able to have a kid,’ ” he shared in this week’s PEOPLE cover story for the magazine's first-ever Pride issue. “This is a dream come true. It feels like my life has actually begun,” Cooper continued. “And I sort of wonder, what was I waiting for? This is a new level of love. It’s unlike anything I’ve experienced, and yet it’s also very familiar and incredibly special and intimate. It’s really extraordinary.”

So happy for Anderson

On Instagram, the anchor had posted the news of his son five weeks ago, writing: I want to share with you some joyful news. On Monday, I became a father. This is Wyatt Cooper. He is three days old. He is named after my father, who died when I was ten. I hope I can be as good a dad as he was. He continued: As a gay kid, I never thought it would be possible to have a child, and I’m grateful for all those who have paved the way, and for the doctors and nurses and everyone involved in my son's birth. Most of all, I am grateful to a remarkable surrogate who carried Wyatt, and watched over him lovingly, and tenderly, and gave birth to him. It is an extraordinary blessing - what she, and all surrogates give to families who cant have children. He added:I do wish my mom and dad and my brother, Carter, were alive to meet Wyatt, but I like to believe they can see him. I imagine them all together, arms around each other, smiling and laughing, happy to know that their love is alive in me and in Wyatt, and that our family continues.

Being a new parent can be exciting but also quite draining and Cooper admits he is exhausted. “I’m more tired than I’ve ever been, but I wouldn’t change it for the world,” he shared. “I cry at things I never cried at before. And Benjamin, I’ve never seen him cry, but I couldn’t believe how weepy he gets with Wyatt. I find myself being overwhelmed with emotion, and it’s a lovely thing.” Cooper said he is also filled with gratitude for “all the lesbian, gay, bisexual, transgender and queer people who struggled for generations and have died never thinking this was a possibility.”

Having a child has given Cooper a new perspective of the world. “I feel invested in the future in a way I hadn’t really before,” he said. “There’s something about having a child that makes you feel connected to what is happening and you want to make sure that the world this child is growing up in is a better one. You suddenly worry much more about the future of all of us." According to HuffPost, Cooper was moved to tears on Tuesday following a call for racial justice from civil rights activist Dr. Cornel West. On CNN’s “Anderson Cooper 360,” the social critic recounted Tuesday’s funeral for George Floyd.

West invoked Cooper’s newborn son Wyatt in his passionate call for justice. “We’ve got a love that the world can’t take away. The world ... may make being Black a crime. But we refuse to get in the gutter, and we gonna go down swinging like Ella Fitzgerald, Muhammad Ali, in the name of love and justice,” West said. “We’re doing it for Brother Wyatt, we’re doing it for my daughter, we’re doing it for the Asians, we’re doing it for the whole world.” When Cooper said he feels like a student whenever he hears West speak, he replied, “We’re in it together, brother,. And the beautiful thing about tears ― Socrates never cries, but Jeremiah does and so does Jesus. We cry because we care, we’re concerned. It is not about political correctness. It’s not about self-righteousness. We cry because we are not numb on the inside.”

I really needed this one today, thank you