trending celebrity people lifestyle news animals
Tahlequah, The Whale Who Carried Her Dead Calf On Head For 17 Days, Is A Mother Again

Tahlequah, The Whale Who Carried Her Dead Calf On Head For 17 Days, Is A Mother Again

The newborn calf appears healthy as it was seen swimming alongside its mother in its second day of free-swimming life, researchers said. 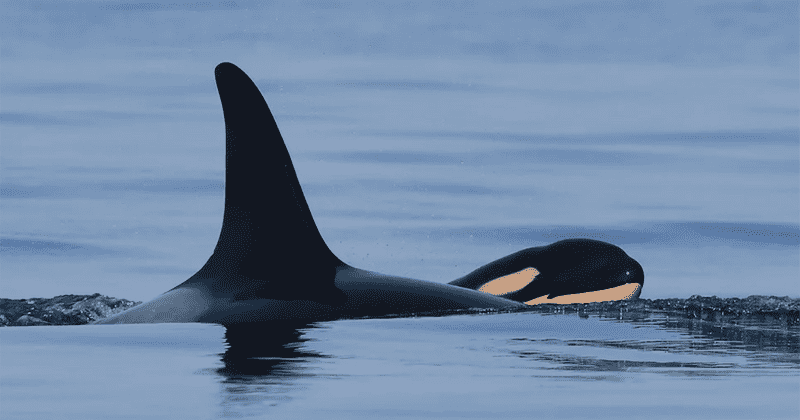 Tahlequah, an orca whale, became known to the world when mourned her dead offspring for 17 days, towing the calf's body along with her all those days back in 2018. It seems happier days are ahead for this bereaved mother as the whale has welcomed a new calf last week. The mom-whale, also known as J-35, gave birth to her latest addition on Friday, Sept. 4, according to the Center for Whale Research. They added that the baby whale "appeared healthy and precocious, swimming vigorously alongside its mother in its second day of free-swimming life", People Magazine reports.

According to the researchers at the center, given the approximate 18-month gestation period, they have deduced that Tahlequah became pregnant again in February 2019. Sometime in July last year, the team identified that the whale was expecting again. We saw images of Tahlequah from July this year as compared to one in September of last year - it showed her middle had notably enlarged. It was a welcome sight for researchers and Tahlequah's caretakers as the loss of her previous calf had really torn her apart. They noticed a major change in her behavior as well - she began feeding more since that fateful time.

#J35, the southern resident killer whale that made headlines for carrying her dead calf across the ocean for weeks, is a new mother again. #Tahlequah
Read more: https://t.co/ULI2mdVI9R pic.twitter.com/bz4iPTv1em

"Tahlequah was mostly separate from the other whales and being very evasive as she crossed the border into Canada, so we ended our encounter with her after a few minutes and wished them well on their way," researchers said. It was sometime in summer 2018 that this mother whale rose to prominence and made worldwide headlines as she embarked on her "Tour of Grief", where she swum with her calf's body. The calf died just 30 minutes after birth. Tahlequah went on to travel some 1,000 miles with her pod while towing the late newborn.

When i saw this on the news it made my day! To me Tahlequah is a positive message from the people's spirits, the first peoples who died on the Trail of Tears. Congratulations Mom!

"We hope this calf is a success story," said researchers. "Regrettably, with the whales having so much nutritional stress in recent years, a large percentage of pregnancies fail, and there is about a 40 percent mortality for young calves." Tahlequah belongs to the Southern Resident whales that live in the Puget Sound in the Pacific Northwest region of the United States. These whales, rather a group of orcas, were listed as endangered in 2005. The orcas segregated into three different pods which researchers have classified as J, K, and L. According to John Durban and Holly Fearnbach, who are scientists with the Southhall Environmental Associates and SR3 respectively, they had discovered that Tahlequah was pregnant using drone imaging. They were quoted as saying so by the Seattle Times back in July.

When Tahlequah appeared to mourn the loss of her calf in 2018, she became a symbol of the plight of the Southern Resident whales, which were listed as endangered in 2005. The birth of her new calf brings the population to 73. https://t.co/6I4X3IgVja pic.twitter.com/unXxPTlmnn

Tahlequah's second pregnancy was not seen as a guaranteed success as about a third of the pregnancies among the Southern Residents don't make it. This data was found in a study out of the University of Washington.  "Lack of prey, increased toxins, and vessel disturbance have been listed as potential causes of the whale’s decline," the study, published in 2017, said. The orca's main food source is Chinook salmon, which are also endangered. Meanwhile, the National Wildlife Federation (NWF) stated that climate change and pollution also happen to be large threats to marine life. It was only last May, did we see another whale give birth among the Southern Residents population. The Center for Whale Research said that it was a "very welcome addition" as the pod is struggling with population levels.

Isn’t it odd that we think we are the only species capable of feeling grief or love or any other emotion? I don’t find it unique that a highly intelligent creature mourned her dead calf. I found it normal.

"Orcas also suffer from toxic chemical contamination. Chemicals like PCB and DDT, which get dumped into the ocean via mining operations, offshore oil development, and agriculture, enter the food chain through zooplankton. As they move up the chain from invertebrate to fish to orca, these pollutants become concentrated. Recent studies have found that orcas are among the most contaminated marine mammals in the world, making them more susceptible to disease and likely causing reproductive difficulties." the NWF wrote.