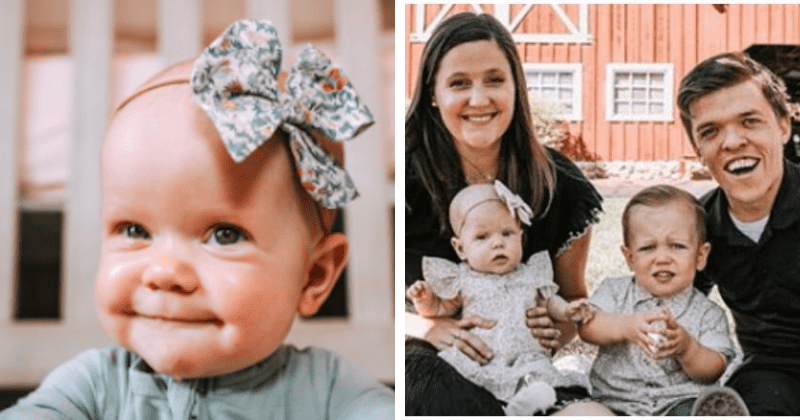 Little People, Big World stars Zach and Tori Roloff are parents to 2-year-old son, Jackson, and daughter, Lilah Ray, who was born in November. Proud mama Tori has been showing off adorable pictures of her baby girl on social media. Fans can now get a peek into watching baby Lilah grow cuter with each passing day.  The couple has nicknamed the infant "Miss Personality" for her expressiveness. Some of our favorite pictures of baby Lilah are the ones where she is looking at herself in the mirror and absolutely loving the sight of herself. Her mom cutely captioned the picture: I wish everyone looked at themselves like Lilah Ray does in the mirror. Grandma Amy Roloff, who is Zach's mom, also left a comment, saying: Precious.

The baby girl also posed with big brother Jackson, where the 2-year-old was seen kissing his little sister's head in another adorable picture. Their dad Zach was born with achondroplasia (the most common form of dwarfism). Jackson and Lilah were also born with achondroplasia. Tori and Zach tied the knot in 2015 after the pair met while she was working on the family farm during pumpkin season. “I forget a lot of times that I’m the only average-height person in my family,” Tori told PEOPLE. “It’s just so normal to us.” The reality stars don't mind adding more little ones to their pack. “Originally I was like, ‘Two kids is my max. But I can definitely see us having more.” Zach added, “I could do three or four!” But they're making it clear that they're not in any hurry just yet. “It’s probably a little early for Tori to be thinking about that,” said Zach. They are enjoying every moment of raising their little ones. “We’re loving the season that we’re in right now raising kids,” said Tori. “Zach and I always say that we were built for this family life.”

Zach Roloff's mom, Amy Roloff, had announced her engagement to Chris Marek last year. The 55-year-old star said, "I never in a million years thought I’d be getting married again, but I also hoped for it! Now that it’s happening, I couldn’t be happier or more excited.” Amy was previously married to Matt Roloff and the two were married for 27 years. They have four children together: twin brothers Jeremy and Zach, 30, daughter Molly, 27, and youngest son Jacob, 23. She filed for divorce in 2015 which was finalized in 2016. According to Good House Keeping, Amy received mixed reactions when she announced the news of the engagement to the rest of her family. Zach was particularly shocked when she stopped by his and Tori Roloff’s home to show off her heart-shaped diamond ring.

Zach later explained his awkward reaction to the news. "I told my mom and dad, ‘Hey, [this is one thing] I don't want to talk about on camera, my one out of bounds is your guys' relationship and if that relationship goes anywhere else beyond where it is now,” he said. “I don't want to be surprised by any news of those relationships on camera. And then she went on camera and surprised me with that news. We've been doing this [show] for 15 years, and I've showed some of the most difficult and awkward moments of my life. There's just been one thing that entire time that I've asked my parents to do with me in private and my mom couldn't remember. It's like, no, I'm not putting up with that."

The family has had its share of ups and downs. In 2018, Amy hinted that her ex-husband's relationship with his current girlfriend and former Roloff Farms employee, Caryn Chandler, may have contributed to their eventual divorce. "I have to take a little moment to process this. It will always be difficult for me," Amy said talking about Caryn and Matt's relationship. "It takes everything I have not to bring up that past baggage and apply what’s happening now." What unfolded in the years between were rough patches between the couple. "People say marriage is work, how much work can it possibly be? At what point is it too much work?" Matt once asked. He moved his things to the guest house on Roloff farms. "I am saddened by it. We don’t have a plan as far as how we are going to work this out so it’s not going to be easy," she reportedly said at the time. But things didn't get better and in 2014 they announced that they were separating. However, now it looks like Amy Roloff is ready to move on with her own "happily ever after" with fiancé Chris Marek.