John Lewis was perhaps MLK's finest disciple, said Obama as he spoke of the need to carry on Lewis's fight. 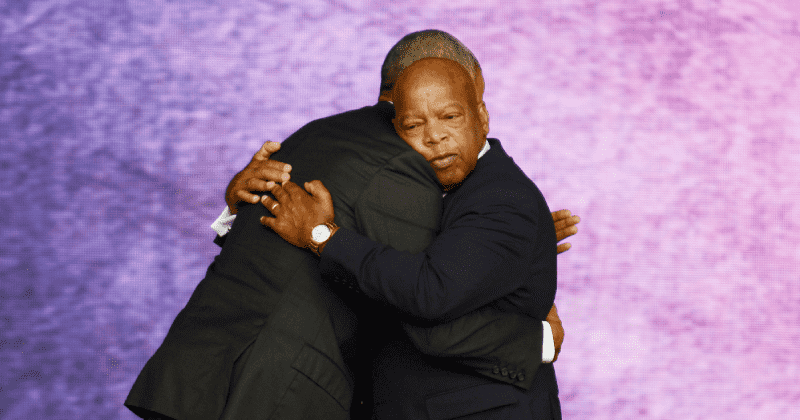 Presidents George W. Bush, Bill Clinton, and Barack Obama paid respects to civil rights stalwart Representative John Lewis at his funeral while Donald Trump was conspicuous by his absence. John Lewis was 80 when he passed away on July 17 from pancreatic cancer. He was one of the original speakers from the 1963 March on Washington and the last one to pass away. The former Presidents heaped praise on the Democrat during his funeral organized at Ebenezer Baptist Church in Atlanta, reported CNN. When 23-year-old John Lewis spoke at the nation's capital in 1963, he was the youngest speaker to do so and he was also the youngest of the "Big Six" leaders of the civil rights movement.

"It is a great honor to be back at Ebenezer Baptist Church, at the pulpit of its greatest pastor, Dr. Martin Luther King, Jr., to pay my respects to perhaps his finest disciple," said Obama. He also touched on his personal relationship with Lewis, who he considered his mentor. "I was proud that John Lewis was a friend of mine. He treated everyone with kindness and respect because it was innate to him—this idea that any of us could do what he did if we're willing to persevere," said Obama. "What a gift John lewis was. We are all so lucky to have him walk with us for a while and show us the way."

Obama said he spoke to Lewis recently in the wake of George Floyd's death about the protests that followed. "I told him all those young people, John, of every race and every religion from every background and gender and sexual orientation, John, those are your children. They learned from your example. Even if they didn't always know it," Obama said.

"He's been called a living saint," said Bush during his eulogy. The former president said today's America had Lewis to thank, considering his work advancing civil rights."We live in a better and nobler country today because of John Lewis and his abiding faith in the power of God and the power of Democracy," said Bush before adding that Lewis will "live forever in the hearts of Americans."

Bill Clinton was also present and paid his tributes to the civil rights leader. "John Lewis was a walking rebuke to people who thought, 'Well, we ain’t there yet and we’ve been working a long time. Isn’t it time to bag it?'" said Clinton. "He kept moving." Clinton couldn't help himself but take a potshot at another civil rights leader, Stokely Carmichael, in his attempt to praise John Lewis. "There were two or three years there where the movement went a little bit too far towards Stokely. But in the end, John Lewis prevailed," said Clinton. Former President Jimmy Carter, 95, and his wife, former First Lady Rosalynn Carter, didn't travel for the funeral because they weren't "traveling these days."

President Donald Trump was absent at the funeral with the White House offering no explanation for the same. He also didn't attend previous memorial events to honor the civil rights leader. Trump's absence was also a reflection of the President's politics. While John Lewis identified with the protestors who raised their voice against police brutality and systemic oppression, the President labeled them terrorists and thugs.

John Lewis wrote a piece of pursuing truth and justice prior to his death that was published as an op-ed in The New York Times. "You filled me with hope about the next chapter of the great American story when you used your power to make a difference in our society," wrote Lewis about the protests that followed George Floyd's death. "That is why I had to visit Black Lives Matter Plaza in Washington, though I was admitted to the hospital the following day. I just had to see and feel it for myself that, after many years of silent witness, the truth is still marching on."

Trump also had a personal feud with Lewis after the latter said he wasn't a legitimate President, reported CNN. Congressman John Lewis should spend more time on fixing and helping his district, which is in horrible shape and falling apart (not to mention crime infested) rather than falsely complaining about the election results. All talk, talk, talk - no action or results, tweeted Trump about one of the leaders who helped deliver the civil rights act. Lewis also led the march in Selma, Alabama, on March 7, 1965, which led to the passage of the 1965 Voting Rights Act. Trump, on the other hand, has been guilty of dropping the ball on the coronavirus response that has killed more than 155,000 people in America.

John Lewis was elected to Congress in 1986 as a representative from Georgia and continued to serve the Congressional district until his death earlier this month. He was also the recipient of the Presidential Medal of Freedom in 2011.