The Baketan Reiseki supposedly searches for unusual paranormal activity in your vicinity and indicates via colorful lights whether you're alone or in the presence of a good or bad spirit. 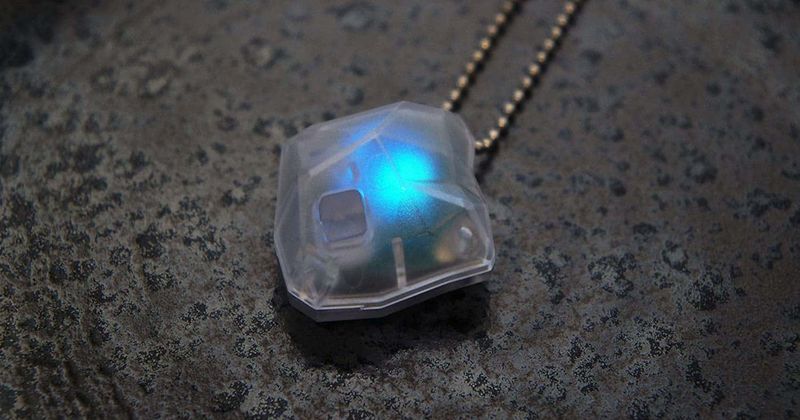 In case you are looking to embark on a paranormal investigation this year—or know someone who's become quite obsessed with the spiritual realm lately—here's a little something that might come in handy: Baketan Reiseki, a color-changing device that can allegedly alert you of supernatural presence around you. While whether or not it actually works is up for debate, this fun-looking spirit detector does seem like the perfect addition to your ghost hunter's tool kit. Made by Japanese company SolidAlliance, the Baketan Reiseki supposedly searches for unusual paranormal activity in your vicinity and indicates via colorful lights whether you're alone or in the presence of a good or bad spirit.

According to a 2019 press release from SolidAlliance, "the first model in ghost detector series was introduced in Japan in 2005 and became a big hit in the sub-culture market in Japan. Lots of ghost reports were sent to the company and media. As a result, over 200,000 units were sold in Japan." Since then, SolidAlliance has periodically released new editions of their ghost detectors, reports Bustle. If the device lights up green, this is said to indicate that there's nothing unusual around. However, if it turns blue, an "angel" is said to be near you and if it's red, you are to assume that a "ghost" is in the area.

It also might glow blue-green (supposedly existing between the green and blue lights on the spectrum of possible outcomes) and yellow (which is said to cover the space between green and red). However, it's unclear what these two colors might mean. The Baketan Reiseki operates in three different modes: "Search mode"—activated by pressing a button on the device—functions as the manual mode. A few moments after pressing the button, the device will make a beeping sound while the light flashes a few times before eventually settling on a specific color outcome.

In "Automatic search mode," the Baketan Reiseki scans the environment every 10 minutes and gives readings based on its findings. Meanwhile, "Barrier mode" is allegedly meant to protect the carrier from spirits. To turn on this mode, press and hold the button for five seconds. The Baketan Reiseki allegedly gets its powers from a ring-shaped cracked quartz piece wrapped around the device battery. Priced on Amazon at 3,024 yen or $28 USD, the device seems popular among customers as it has a 4-star rating and a number of glowing reviews.

"So, I don't know any better way to put this without sounding a bit crazy, but it does work. I'm a very spiritual person, but I am also very skeptical. That said, I have used various forms of divination (tarot, scrying and unfortunately an Ouija board) and have been studying and debunking paranormal instances and learning various belief systems for over a decade. The only reason I even bought this was because a friend sent me an article from Bustle and I just thought it was funny and cheap, but I love Japan and their lore with spirits," wrote one customer. "The day it came in, I decided to run some tests. I don't expect anyone to believe this, but if you're someone who has learned your spirits guides and is energy intuitive and well-versed, I started asking questions to trigger responses that would adhere to how this thing operates."

"Long story short, it does work. It's is green (no activity) when I asked my guides to F off, has triggered when I was having emotional times and they'd normally find a way to reach out, and it has flashed the brightest blue in times of provoking a direct request for a true response. I can't exactly explain it in any other way than if you are connected to the spiritual world, and you want something /tangible/, this proves it," they continued. "I literally got this as a joke assuming it was on some scheduled program response, but it isn't. I live in Virginia which is steeped in war history, and so far the only time it turned red was the morning after a 3-person murder happened just a few streets down from my house. I 'played' with this for two days straight and never got that kind of response, and the first time it went to red was completely on its own, I freaked out, and when I asked my guides if something was happening dealing with the murders and did a manual scan, it went to red again. So take what you will from that, but honestly, this isn't a gimmick, it legit works, and the way it works can absolutely be tested, and honestly, I'm still trying to wrap my head on how it does just with the last few days of owning one and what I've experienced."