trending celebrity people lifestyle news animals
Alcoholic Monkey Goes On A Rampage, Kills One And Injures 250 People Before Being Caught

Alcoholic Monkey Goes On A Rampage, Kills One And Injures 250 People Before Being Caught 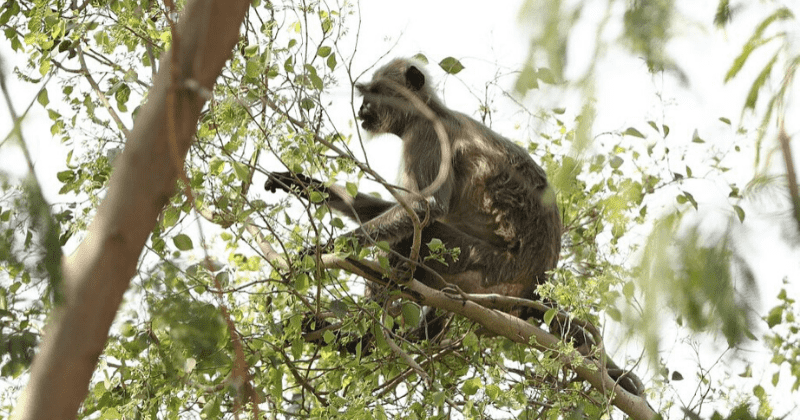 In a rather bizarre incident, a monkey has been accused of killing a person and injuring over 250 people as it went in search of alcohol in an Indian town notorious for its crime. According to FreePressJournal, the incident occurred in Mirzapur, a district in the north Indian state of Uttar Pradesh, 400 miles away from the national capital.  The monkey, named Kalua, resided in the Mirzapur district with its owner, a local occultist who would regularly give the monkey alcohol to drink.

Over a period, the monkey became addicted to the drink and turned into an alcoholic. However, when the occultist died, Kalua's alcohol supply also dropped. After spending a few days without alcohol, the monkey turned aggressive due to withdrawal symptoms and went on a rampage across the town biting innocent bystanders and created havoc all over the city. Forest and zoo officials were notified to catch the monkey. After several attempts, the monkey was caught and has been sentenced to serve a life in captivity at the Kanpur zoo located a little over 180 miles away from Mirzapur.

Anybody else missing “alcoholic killer monkey” on their 2020 Bingo card?

Mohammad Nasir, a veterinarian at the zoo, who's currently monitoring the situation, has said months of confinement hasn't changed Kalua's behavior. "We kept him in isolation for some months and then shifted him to a separate cage," Nasir said. "There has been no change in his behavior and he remains as aggressive as he was. It has been three years since he was brought here, but now it has been decided that he will remain in captivity all his life." Kalua is six-years-old and the doctor fears it will continue to go on a rampage again if it were to be left to roam out in the open.  To date, the monkey hasn't befriended the cage keeper.

Monkeys out in the open are a rather common occurrence in India with large gangs of them regularly seen gallivanting on treetops along temple yards, and on rooftops in towns and cities. In Hindu culture, monkeys are known to be the representative of Lord Hanuman - a monkey king who led an army of monkeys along with Lord Ram to fight the ten-headed Lankan king Ravana in the epic battle of Ramayana.

Kalua's case isn't the only monkey-gone-wild story from the subcontinent. According to DailyMail, another monkey went rogue, killing a person and injuring nine others in the central Indian town of Badnawar, where he terrorized locals for a period of nine days. The Times of India reports that a 60-year-old man named Nathuram died as a result of the attack while a 15-year-old was reported injured among several others. The incident which occurred in May last year required rescue workers to go on a three-hour mission to find and capture the animal.

In yet another monkey incident, this time from India's capital New Delhi, a private bank employee was terrorized after a monkey took him hostage, by sitting on him. The man, employed at Axis Bank in Nirman Vihar, New Delhi, stood still as the animal sat on his back unable to think on his feet as to what he could do.   After drawing an audience, the monkey eventually seemed to get bored and jumped off the man's back and on to the floor.  Then there was an instance where monkey stole COVID-19 samples from a private laboratory in UP.