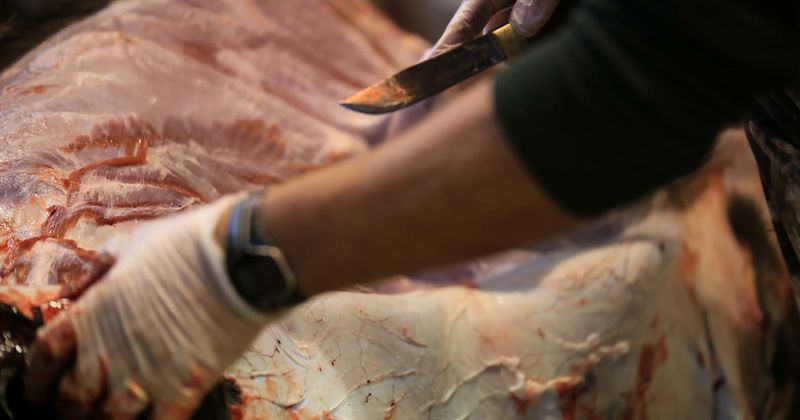 Trigger Warning: The story has details, photos, and video of an animal being butchered

A high school teacher in Alaska hunted a moose and took its carcass to his school for a class in practical life lessons and anatomy. His students were then required to butcher, debone and pack the parts of the animal as a part of the 'World Discovery Seminar' (WDS) program in Chugiak High School in Anchorage. The seminar is a regular part of the school's calendar but the students were not expecting to engage in an activity of this sort. “What I try to emphasize — and the World Discovery Seminar program as a whole — is to emphasize experiential learning,”  Brian Mason, the school teacher, said as nearly 30 of his students used thin knives to slice up the carcass. “You can learn certainly about anatomy from diagrams and textbooks and videos but getting your hands on an animal is a big part of the science aspect of it,” he said, according to Anchorage Daily News.

A Chugiak High teacher hunted a moose and brought it to school. Then things got interesting. https://t.co/q6P6J6DqAz

According to information on the school's website, the WDS's main goal is aimed at establishing "a smaller learning community that creates a sense of identity, belonging, and teamwork". It has been described as a "school-within-a-school." Around 125 students undertake the seminar in each batch and they are assisted by a team of 4 teachers. "The program employs the Paideia methodology, a Socratic ­based learning/teaching technique focused on an in-depth understanding of classic historical and literary documents. Discussion and written expression of ideas coming out of the seminar process are emphasized along with challenging projects, hands-on activities, and community involvement.  Students work toward becoming multi-faceted thinkers by examining and questioning real-world events: past, present, and future," the website added.

Ryley Edwards, a student who took part in the school's latest WDS, said, "We do a lot of things that are more interactive than other classes. It’s more fun for learning stuff instead of just on paper.” Another student, Reuben Dobson talked about using sharp knives in class. "I think our teacher knew we’re here to learn and we weren’t going to be stupid,” he said. There were some squeamish moments in the lesson, especially when they were required to separate the moose’s hoof from the rest of its leg.  “Talk about a wake-up call. You think it’s going to be okay and then you do that and it’s like, ‘It’s not going to be that easy',” said student Jasmine McLean.

To hunt the moose, Mason had to get a special permit from the Alaska Department of Fish and Game. This special Cultural Educational Harvest Permit is issued 30 to 40 times each year, according to a department official Tim Spivey.  These are mostly issued for schools and villages. There are times when permissions are also provided for hunting caribou or deer as well as black bears and mountain goats. He, however, highlighted there are some very strict conditions. For Mason, specific limits were placed on the type of moose he could hunt - it had to be an antlerless moose, couldn’t be a calf or a cow with a calf. A report had to be submitted to the authorities after it was hunted, such as the age, sex, specific harvest location of the shot moose. He also had to file a report detailing the educational or cultural program activities that took place.

So basically he got his moose butchered for free.

It took three weeks for Mason to hunt the moose. “The goal was to also learn the skinning and quartering process, but unfortunately I wasn’t able to get the moose out of the woods whole,” said Mason, while adding he was worried at the reaction his lessons would get.  However, once the cutting started, the class became silent. “They’re all being super safe and responsible and frankly they’re really engaged. I wasn’t sure how some students would really deal with the process of getting their hands on a dead animal, that can be an off-putting experience for some students, but I’ve been really impressed with them," he said.