Janie’s House, named after Aerosmith’s 1989 song “Janie’s Got a Gun", is a recovery center for young girls who have been abused. 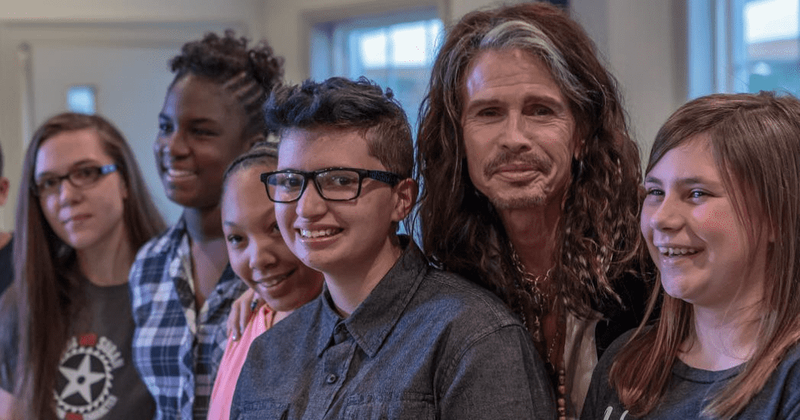 There are rock stars on stage and there are rock stars off it. Steven Tyler is definitely both. The Aerosmith frontman donated a half-million dollars from his charity, Janie’s Fund, to help renovate a home in Memphis. The home operated by Youth Villages—a national foundation that helps children cope with emotional, behavioral and mental problems, is now Janie's Home. According to WHJL,  Janie's house is named after Aerosmith’s 1989 hit song Janie’s Got A Gun —a song about a girl who was abused by her family.

Earlier this year, the I Don't Want To Miss A Thing singer attended the opening of the home for a 'scarf-cutting' ceremony and said, “This does my heart and my soul good." The home will be able to house 14 girls at a time and provide them with the therapy they need to lead healthier and happier lives. “As you can only imagine, being in a band with guys for 50 years, you can have problems,” the Grammy-award winning singer, who also provided artwork for the facility, explained. “And rather than quit, I decided to go to this treatment center for co-dependency.” While in treatment himself, the Dream On singer noticed that nearly all the women present had at some point been abused, emotionally or physically, reports the Memphis Commerical Appeal. "That touched me," Tyler said. "So when I got out of there, I laid that all on Janie."

Tyler added that he also realized that his hit song had real meaning. “All the girls I met had been abused either physically, mentally, verbally, you know. At least 90 percent of ‘em all,” said he. One of the survivors, a 14-year-old girl who suffered from abuse at a young age shared how a loving, nourishing home that offers therapy can make all the difference.  JaBrayia, who is a resident at the facility, told the crowd during the ceremony, “The reason that I am at Janie’s House is because I experienced sexual abuse at the age of three. Through Janie’s House, I can learn a lot about my past and learn I was not the only one that had been through the same problems.”

Tyler is going to help keep the focus on helping survivors in their recovery. “I’m gonna bring this Janie’s Fund with me wherever I go,” he said. “It’s like a dream come true.” Janie’s Fund has raised about $4-million. And this is second home the 70-year-old has opened. The first opened in Atlanta in 2017. The Memphis-area home is the second location Tyler has opened since starting Janie’s Fund in late 2015. “We wouldn’t be here at all if it wasn’t for Steven and his dream of Janie’s Fund,” Patrick Lawler, CEO of Youth Villages, said at the grand opening, according to KDVR.