Speck is currently waiting to be transported over to his new family so he can finally have a forever home. 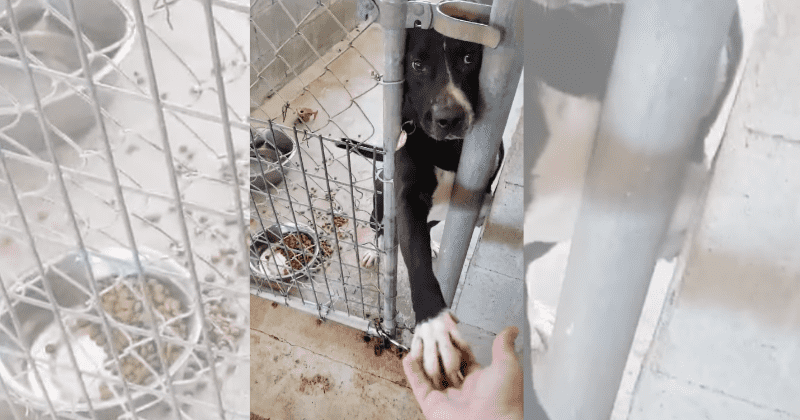 If you happened to pass by the Bullock County Humane Society by chance, you will not miss one animal in particular! His name is Speck and while his kennel may appear like the rest of the ones in any animal shelter, your interaction with him is going to be unforgettable. Speck loves to say 'Hi' to everyone and he does so by adorably sticking his paw out of his cage. Truth be told we might just be on our way there already if we didn't have this pandemic to worry about!

Anytime this loving pup sees someone approach its dwelling, he instinctually pushes his face between the metal bars and reaches out his paw. “All he wants is people's love,” Desiray Miracle-Wilder, the shelter’s director, told The Dodo. “He will reach his little hand out and he just wants you to touch him and hold his hand. And he’s so sad when you walk off to finish cleaning or whatever you have to do.”

Before Speck found such happiness in his current home, he was previously quite unnoticed in a small kennel at the Alabama shelter for over a year and a half. The days passed in apparent loneliness as he patiently waited for a family to choose to adopt him. Speck isn't any stranger to hardships though. He has lived life on the streets and the scars on his face suffice to his hard days. Yet that hasn't seemed to make him an angry dog as he is quite the opposite of that really.

“You could put anything else around him — another giant dog, a cat, but he is just so fixated on getting love from people that he doesn’t care about anything else,” Wilder said. “He just wants you to touch him. If you sit down, he’s laying on you, if you hold his hand, he’ll hold your hand, if you scratch his belly, he’ll roll over.”

It was only last Thursday when Wilder was cleaning the kennels when she gazed at Speck like any other day. But this time, something stirred in her and she was truly inspired to film the puppy's cute hand-holding routine. Soon after she was done, she hoped that the video would raise some interest in the little dog and posted the clip on her Facebook page. It was a success as the footage soon went viral garnering almost 100,000 views in just a few days. Before long, the video caught the attention of Allie's Hope For Paws Dog Rescue, who managed to connect the shelter dog with an eager and truly enthusiastic adopter.

“He will be running on a 26-acre farm with Mike, his family, and two fur brothers!” Wilder wrote on Facebook. “We are so excited. Not only did Speck get adopted due to this video of his cuteness but he also helped a few other fur babies get rescued and he got us some food donations!” "Update: 4/4/2020 Speck has been dog and cat tested and passed both. He is so focused on people love that ye doesn't care what other furry things are around him," she added.

Speck is now totally excited about his future caretakers. He is currently waiting to be transported over to his new family so he can finally have a forever home. As Speck leaves the shelter, Wilder notes that there are still other long-timers who are waiting for their chance to find a loving home. That being said, the director is still hopeful that Speck's story will inspire people to open their hearts and adopt the other adorable puppies at the shelter.