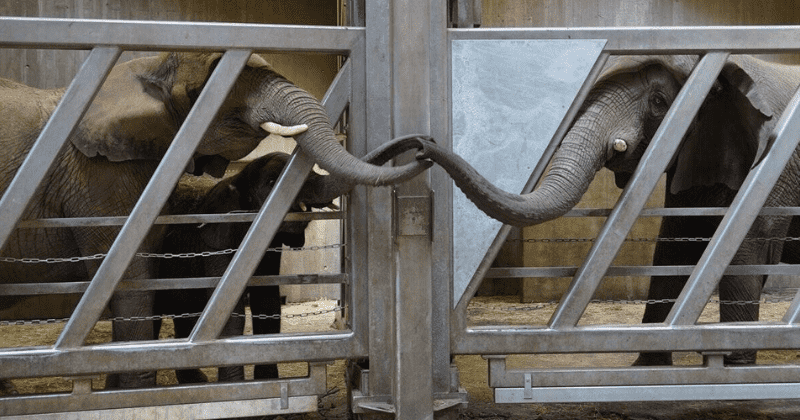 A touching photo was captured at a zoo in Germany where three elephants were seen locking trucks with each other. It was a reunion 12 years in the making. You see, the elephants were family, and the grandmother, who was seperated from her daughter, got to touch trunks with her and her granddaughter after 12 years. This is a rather special, as female elephants usually tend to remain with their mothers and herd for life in the wild. Male aka bull elephants, on the other hand, leave the herd to find a mate. The reunion is part of a programme to slowly recreate this natural process of herds in captivity, Daily Mail reports.

Moving image captures elderly elephant being reunited with her daughter at a German zoo after 12 years of separation and meets her grandkid for first time, as they all touch trunks. 😭 pic.twitter.com/Z0H6dS7obp

Thirty-nine-year-old elephant Pori was shifted from her former home in Berlin to the Bergzoo in the eastern city of Halle. Over here, she was finally met with her 19-year-old daughter Tana and her granddaughters Tamika, 4, and Elani, 1, for the first time at her new home.

The zoo has stated that the elephant house will remain closed for a period of time, to give the animals a chance to relax and become accustomed with each other once again. The zoo's statement also said that visitors will still be able to see the elephants in their outdoor area.

Currently, Pori is living in a separate environment as that of her offsprings. However, over the next few days, they will spend more time together in the outer section to reacquaint themselves with each other. The 39-year-old elephant is from Africa and was born wild in Zimbabwe in 1981. She was brought to Germany to the Magdeburg zoo, where she stayed during 1983-1997. After that, she was sent to the for Tierpark Berlin for breeding purposes. She gave birth to her calf Tana in 2001, and raised her. Usually, in the wild, elephants live together in family groups, each led by a lead member, often female. Daughters in this matriarchal society tend to stay with their mothers for life, as young bulls (males) leave the herd as soon as they are sexually mature. Elephants are scattered throughout sub-Saharan Africa, South Asia, and Southeast Asia and are found in different habitats, including savannahs, forests, deserts, and marshes.

I don't find this at all adorable but utterly 💔
12 Years separated, this is so wrong on so many levels.

The elephant population in various zoos around Europe and North America is being monitored as part of a conservation breeding program (EEP). This programme has committees that are made up of experts from different zoos who will determine new herd compositions and the subsequent animal transfers. “Tana, Tamika and Elani welcomed mother and grandmother Pori through a partition today, the first touching was curious and very friendly,” the zoo wrote on its official Facebook page while sharing the photos. “Pori’s arrival in Halle is an important step in modern elephant husbandry," said the zoo’s director Dr. Dennis Müller. An estimated 100 African elephants are killed each day by poachers seeking ivory, meat and body parts, leaving only 400,000 remaining.

How can this be described as adorable? These magnificent social animals locked up in cages, this is torture. Horrific not adorable or cute as some comments have said.

“In the future, all elephant herds in European zoos should be cared for in such natural family structures. We got a big step closer to this goal today,” Dr Muller was quoted as saying on the zoo’s website. “After the two parties briefly faced each other, they communicated with each other using the sounds typical of elephants and reminiscent of thunder rolls,” the zoo wrote about the reunion. “It didn’t take long for the youngest sprout Elani to bravely stand under Pori’s belly and even try to drink under her grandma’s eye,” the zoo wrote. “What turns out to be extremely complex, often months-long processes, ultimately serves the natural and animal-friendly keeping of African elephants in European zoos,” the zoo said in its post.

Better to be in a zoo where they get space to roam that in some so called sanctuary where poachers kill them for ivory and to supply Chinese medical items. China needs to be dragged into the 21st Century we all need to leave Chinese made goods on the shelf