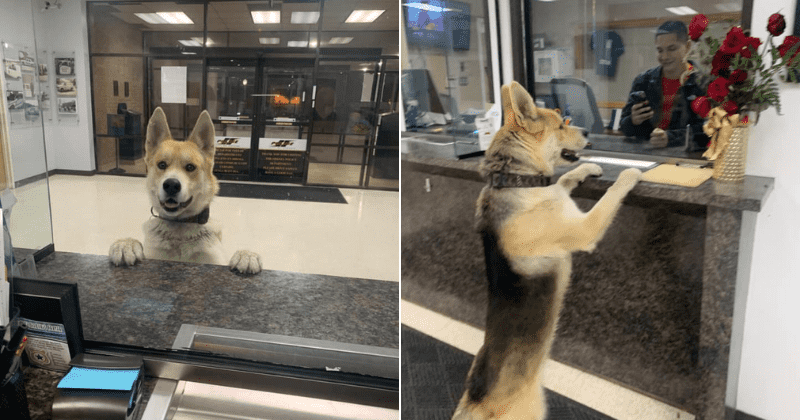 A friendly dog who somehow got separated from his home went straight to a police station to report himself missing. The canine showed up in the early hours of the morning at the reception of the Odessa Police Department and signaled that he was lost and needed to go home. Sergeant Rusty Martin was among several officers who were at the station to receive him. The dog didn't seem flustered, scared or in any discomfort and was rather eager in his call for help., MSN reported.

He was applying for the K9 unit 🤣

Sgt. Martin noticed that the pup didn't seem distressed, considering he had lost his way a while back. "We were all excited to have him in the building," Martin told The Dodo. "We had a tennis ball and threw it in the lobby for a bit. Everyone loved on him." The officers were enjoying the friendly dog's unexpected company as the on-duty officers saw that the ID tag had apparently fallen off the collar he was wearing. The police then contacted animal control who dispatched their crew to check for a microchip on the animal.

By the time they got there, however, the dog had already decided to bounce from the station. The officers told the outlet that the dog decided to head back to its family, all on his own. "He ran out just as quick as he came in," Martin said. "The owner responded the next day [to say that] it was his dog and he had returned home. He lives about a mile from the station.". Martin posted about the incident on social media where he later found that the dog's name was Chico and that his behavior implied that he was perfect for the work they did there. "I was impressed," Martin said. "He may just be cut out for this work."

In the post that the officer's uploaded on Facebook, Martin wrote: We’re thinking he wanted to apply for a K-9 position after eliminating a Lassie type situation. He was given lots of love and attention until he decided it was time for him to leave. He let himself out and after an exhausting search was not found. We were relieved to learn he safely returned to his owner. Chico is welcome back anytime.

Research has found that dogs rely on familiar scents to find their way back home, and those scents can lead them a long way. A 10-mile distance isn’t that far for a dog to follow a scent as long as the wind conditions are right. Bonnie Beaver, the executive director of the American College of Veterinary Behaviorists and a professor at Texas A&M University, told TIME Magazine, “An eleven-mile distance is actually not terribly long for a dog…If the dog had walked both from and back to his home he’d be following his own scent trail.”. Simply put, if dogs happened to wander off somewhat close to their homes, they just might be able to retrace their own smell back to their doorstep.

This is fabulous! “Dog Strolls Into Police Station To Report Himself Missing” https://t.co/MRs0NZdqEp HT @NMalliotakis

Zoologist Hynek Burda told National Geographic: “To many dog owners who know about the good navigation abilities of their protégés, the findings might not come as a surprise, but rather as an explanation for the ‘supernatural’ abilities. although it is not clear to the researchers what the dogs might use their magnetic sense for.”. Well, this explains why Chico didn't have any trouble finding his way around.