Ethan weighed half his average - he was just 38 pounds as against the 80 pounds a healthy dog of his kind should be. 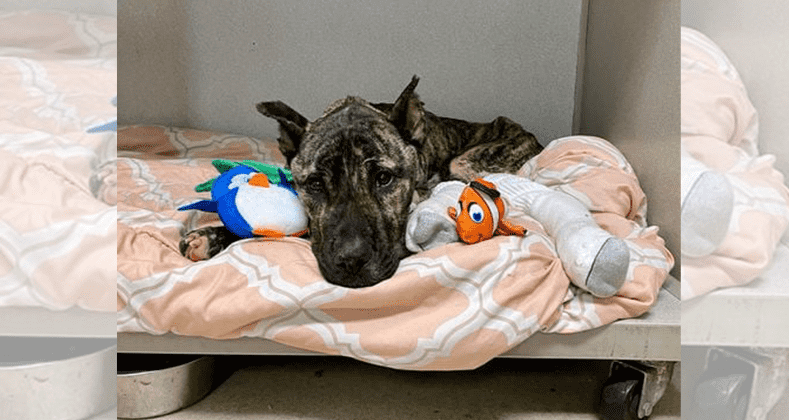 On January 29, a dying dog was dumped in the parking lot of the Kentucky Humane Society by his cruel owners who'd allegedly left him without food or water for weeks. Luckily, he was spotted by a concerned wishlist donor who was dropping something off at the facility. Soon, KHS staff rushed the emaciated canine to the veterinary services where they could access the true nature of his condition. What they found was deeply disturbing, as the dog—Ethan as they named him — was so feeble he could barely lift his head. A weigh-in then revealed he was just 38 pounds—as against the 80 pounds a healthy dog of his kind should be, PEOPLE reports.

Dying Dog Dumped in Parking Lot Recovering at Rescue as He Fights for a Second Chance at Life​ https://t.co/ydyI2zdpHr

He was reportedly so dehydrated and had such severe muscle loss that staff could see the outline of his ribs off his pale skin-and-bones frame. "He is the thinnest dog we have ever seen that was still breathing," KHS wrote in a blog post about Ethan's rescue, adding that, "His body tried to find any fuel to survive" and that he reeked of feces and urine. Doctors then put in hot IV drips and threw heated blankets around him to provide warmth and much needed strength. A staff member later took him home for the night to monitor his condition and to feed him every two hours. However, around 3 am on January 30, Ethan began displaying severe psychological symptoms and twitched uncontrollably, which led him to be rushed to an emergency hospital where he could be given critical care he so urgently needed.

Thankfully, the hospital visit seems to be working as the pupper is trying to regain his strength, but not without difficulties. "He has begun eating and drinking again but he has to be held up to bite and swallow because he is too weak to hold up his own head," KHS added on January 31. "We are taking it very slow and steady and are hoping that he is strong enough to fight. He is having his blood work monitored closely and is under 24-hour supervision with supportive care, IV fluids, and medications," KHS wrote of Ethan's improving condition, adding that they've "never wanted so badly for an animal to survive and be able to have the happy ending they so desperately deserve."

What a beautiful dog... I hate people, but then those that took him in and taking care and showing love to him... I thank you so much

Posting yet another update on February 1, KHS said Ethan has a "50/50 chance of survival but that he is showing great signs of recovery including a continued interest in drinking and eating, and even greeting the staff with the occasional tail wag. "An absolute miracle!", the facility called this development". They added that while he is no way out of the woods, they are "cautiously optimistic that he may make it past the hurdle. In the last update, the hospital was running the pup's blood work to get a clear look at what's causing his neurological issues but noted that they have since lessened after he continued eating and regained strength.

Thankful for who found him❤ I don't get how people can be so cruel and have no heart at all:( Happy he has been given a 2nd chance!

"It really seems like our entire city has come together to pull for this special baby and we cannot explain to you how grateful we are for every single helping hand," the facility shared, about the overall love and kindness showered on him by many in Kentucky. At the moment, KHS is asking people to keep Ethan in their prayers while urging those who can to donate money in his honor. To receive more updates on his condition, one can follow KHS's official Facebook page here or visit their official website here. Meanwhile, those following Ethan's journey to recovery are warmed by the relentless effort on the organisation's part. Some took to Facebook to show their support for KHS. Katherine Easley wrote: "Thankful for your caring staff and endless energy to do our part in taking care of animals who have experienced such neglect and trauma." Cheryl Russell added: "Thank you for showing him loving kindness, perhaps for the first time in his life."

How can anyone be so cruel to animals?! Thank God this dog is with people who can help him. Hope he makes a full recovery and the rest of his life is full of love and happiness💕🐶