"We don’t feel in a rush to make the movie, we never have," the director confessed. 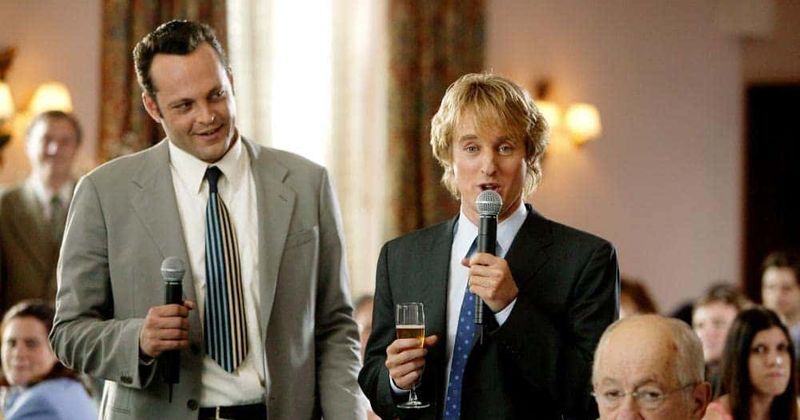 Wedding Crashers is a 2005 comedy where Vince Vaughn and Owen Wilson played divorce mediators who often crashed wedding receptions in order to meet women. The movie also starred Rachel McAdams and Isla Fisher. Vaughn previously told Entertainment Tonight last year that he and Wilson were approached to reprise their roles for an upcoming sequel.  "Owen and I and the director of Crashers have been talking for the first time seriously [about] a sequel to that movie," Vaughn said. "So there has been an idea that is pretty good. So we are talking about that in the early stages." "They were fun movies to make," Vaughn reminisced about Wedding Crashers, as well as Mr. and Mrs. Smith and Zoolander. "It's always fun to make people laugh and go to work with people that are funny."

Apparently there will be a Wedding Crashers 2 with the whole cast returning. I’m in. pic.twitter.com/X4U5sCrvBL

In an interview with ReelBlend, Cinema Blend reports that Vaughn went into further detail about the possible sequel. "David Dobkin had a really good idea that’s contemporary," Vaughn shared. "I never went and made a sequel to a lot of these films at the time because it felt like we were just chasing a success. But what I like about where Crashers could potentially be at is [that] there’s something that is of this moment that feels really good… a lot of these comedies, even something like Wedding Crashers, you’re sort of investigating things that I think are real in our lives, but the comedy is an overcommitment to the absurd."

Now, it seems HBO Max may be making the sequel a reality. According to AV Club,  Production Weekly stated Wedding Crashers 2 is now in pre-production, with original director David Dobkin returning to direct and original stars Wilson and Vaughn (along with Isla Fisher and Rachel McAdams) all set to return.  According to Movie Web, production is set to take place this August in Puerto Rico. As for the other cast members, no details have been revealed as of yet.  Christopher Walken and Jane Seymour have expressed interest in reprising their roles. There's no news on whether Will Ferrell will be back as Chazz, the original wedding crasher either.

In Pre-Production to be exact. Filming commences THIS AUGUST. pic.twitter.com/iH2N4UwiZ7

"We talked about it for many, many years," Dobkin told EW last year when the film turned 15. "Vince, Owen, and I sat down at one point early on, when they were pressuring us to come up with something, and we had a lot of fun, but we realized we were remaking the same movie again and we really didn’t want to do that." It took a while, but the director was finally able to get a sense of what the film world be like. "I had an idea that really stuck in my mind," he confessed. "Ten or more years later, all of a sudden these guys are in their mid to late 40s and they end up single — what do they do? That’s interesting to me, because I know guys in their mid to late 40s who have ended up single, whether it’s out of marriages that didn’t work out or they just didn’t find anyone to marry, and it’s a head trip for men, the idea of maybe I’m not going to be a dad, maybe I’m not going to be married. So it became a real cultural question and it yielded an interesting kind of center to the movie."

At the time, the filmmaker went on to say that he's "played around with a screenplay" that Wilson and Vaughn still need to read and work on, but "we are having conversations." "We don’t feel in a rush to make the movie, we never have," said Dobkin.  "I believe in sequels that are new and appropriate, and I don’t think there’s a time limit of chasing what that is. There may be one day when we can finally get it all together. I can tell you that it’s really fun to read those voices of these guys on the page again. There was a joy that I was surprised at when I read the first draft of what could have been, or maybe one day will be, this sequel. I do think audiences would love it."

This week, the @GroundFloorPod welcomes @Eurovision and Wedding Crashers director David Dobkin on the show!

We discuss how he got into directing, what it takes to make it in Hollywood today, and yes, we talk Wedding Crashers...2