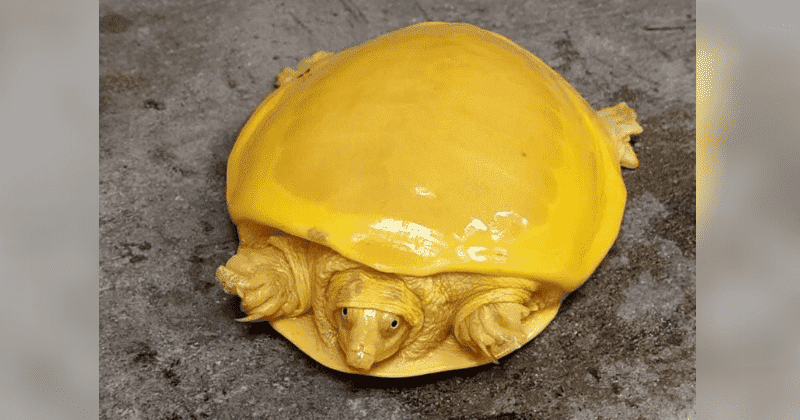 If you, even for a minute, think that you have seen all there is to see in nature, then you might want to guess again. The amazing world of flora and fauna never ceases to amaze us with all its glorious wonders. There is always something new and rare to spot and learn about, and many of these sights will really take you by surprise and leave you awe-struck. That being said, we must not forget just how much of a negative impact our industrial development has had on the wildlife. Many species are now on the brink of extinction thanks to deforestation, clearing of land, hunting, fishing, and other factors caused solely by our presence on the planet.

Among the species that are in danger of being wiped out are turtles. That might come as a surprise to you but it's true. Turtles are a vulnerable species and there are some varieties that are so rare that spotting them even once in your life is a big deal.  Recently, a bright yellow turtle was spotted and rescued from a pond in the Indian state of West Bengal. Yellow-Bellied Sliders turtles are a breed but they are not actually yellow in color. This turtle is as unusual as they come and is an uncommon sight.

An Indian Forest Service officer, Debashish Sharma tweeted about the yellow turtle. He wrote: "Today a Yellow Turtle was rescued from a Pond in Burdwan, WB. It's one kind of a rarely occurring Flapshell Turtle." In a follow-up tweet, he stated: "It's an albino kind whose peculiar yellow color is maybe because of either some genetic mutation or congenital disorder due to absence of tyrosine pigment." According to Springer Link, tyrosine is the primary precursor of the complex black pigment, melanin, in mammals. It helps in speeding up the process of oxidation.

Most probably it was an albino. One such aberration was recorded by locals in Sindh few years back. pic.twitter.com/ZHAN8bVccU

Ironically enough, the turtle was rescued by a fisherman who found it caught in his net. Luckily, this fisherman realized that this was no ordinary turtle and rightly notified the authorities about it. Little did he know that this particular species of turtle is protected under Schedule I of the Wildlife Protection Act. Chief wildlife warden V K Yadav told The Times of India that the rare turtle has already been released into a river and this was not the first time it has happened. Shailendra Singh, Programme director, Turtle Survival Alliance of India, stated that he had received reports of yellow Flapshell turtles once in 2017, 2019, and again this year. He explained the rare condition as "a result of pigmentation loss due to genetic mutation. In such cases, genes that are responsible for the natural color and pattern of an animal get mutated.”

It's an albino kind whose peculiar yellow colour is may be bcoz of either some genetic mutation or congenital disorder due to absence of tyrosine pigment. @SudhaRamenIFS @drqayumiitk @wiiofficial1 @moefcc @susantananda3 @mvraoforindia pic.twitter.com/Yfhdu3D06t

Close snap of the same. Mark the pink eyes, one indicative feature of albinism. pic.twitter.com/MfXrXVYbfH

A major Indian news outlet, NDTV, reported that this was, in fact, the second time this very year that a rare yellow turtle has been spotted in the sub-continent. The first one was found in the Eastern state of Odisha back in July. The pictures have been shared on Twitter and were even retweeted by Senior IFS officer Ramesh Pandey. He also noted the earlier discovery and stated, "This is the second incident in the recent past when Yellow Flapshell Turtle has been found. Before this one Yellow Flapshell turtle was found in Balasore, Odisha. Still not very clear whether a new species or albinism or mutant albino". Siddhartha Pati, executive director at the Association for Biodiversity Conservation, which works to protect wildlife and habitats, told CNN, "We find turtles and crabs regularly and we rescue them and release them into the water. But this is the first time in Odisha and second time in India that an albino turtle has been found."

Odisha: A yellow turtle was rescued by locals from Sujanpur village in Balasore district. It was later handed over to Forest Department officials. B Acharya, Wildlife Warden says, "This is a rare turtle, I have never seen one like this." (19.07.20) pic.twitter.com/MWxjLzabyc