Pistachio was among a litter of 5 pups born on October 9 on the Italian island of Sardina. His other siblings have normal colored fur like their mother 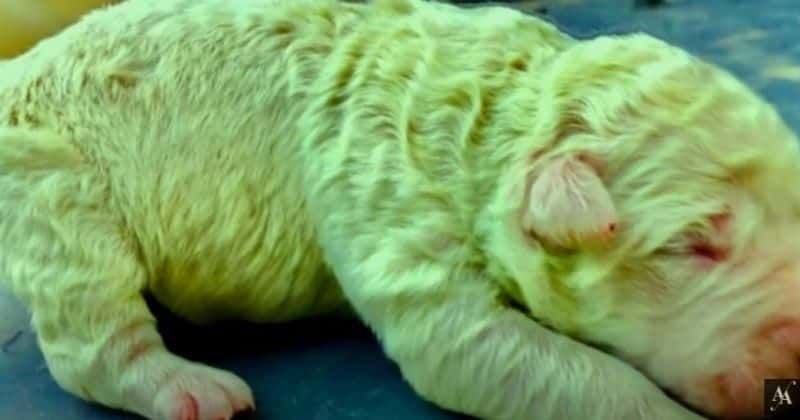 Cristian Mallocci, a farmer on the island of Sardina in Italy was surprised when his dog, Spelacchia, gave birth to a puppy with green fur on October 9, reports Reuters. The pup's four other siblings did not have the same color. True to his name, the pup was named Pistachio. While it is extremely rare for a dog to be born with a green hue, this is aberration occurs "when pale-colored puppies have contact in their mother’s womb with a green pigment called biliverdin." Biliverdin is the same pigment that causes the green color in bruises. For all those excited pet lovers who can't wait to see Pistachio with his lush green fur as he becomes older, we have some sad news - the green color will not last forever. It will gradually fade with time and as the dog grows.

A green puppy has been born in Italy. His name is Pistachio. 💚

While rare, puppies can be born green because of a substance called biliverdin in their mother's womb. The green will eventually fade. pic.twitter.com/CPm8U7aPcB

Mallocci said he has decided to keep this unique dog while giving the rest of the litter away to loving homes. Pistachio will be trained as a sheepdog and help his master with managing his herd on the farm that he runs with his brother-in-law. An optimistic man, Mallocci sees Pistachio's birth as a good sign at a time when the world battles the pandemic. He views the color green as a symbol of hope and luck. With the pup's birth, he said it was probably meant for the dog to put a smile on people’s faces and make the world a slightly better place than what it is right now. Social media denizens wished Pistachio well.

Sweet name for the little one!

Such a beautiful baby too. Perfect name isn't it. :)

Others like Tor Martin Aune commented on Facebook about the phenomenon being common. They wrote: This is far from uncommon. I have seen about a dozen pups born like that, its gone within the first weeks or months. Others like Roger Wilson were more cautious about the hype and tried to offer an explanation about the green fur.  He noted: This is what happens when he birth sac ruptures inside the mother. The fluid inside tints the white fur of the pup a green color. It doesn’t stay that color. Most of the time, the mother licks it off the pup within a day or two. What’s sad, is there’s enough people who are ignorant to this for a video to be made and an endless supply of gullible people who believe there’s gonna be a green dog running around.

I've heard of animals born with a rare pigment of fur and skin. I think it's a mutation in genetics.

But this is not the first time that a pup has been born with an unusually colored fur. In 2017, a puppy born with green fur in Boston according to CBS Boston. The dog was one of 10 born in the Golden Opportunities for Independence in Walpole. The organization raises golden retrievers to work as service dogs. The pup was soon adopted by a boy who had a rare form of muscular dystrophy named Liam whose favorite color also happened to be green. "I called up Kristen and Jeff and said we have a puppy for Liam and it happens to be green," said owner, Pauline Hoegler. Liam named the pup Fenway. Explaining the reason for the green color, Pauline said, "Within the placenta, the mother has some bile and from what I understand it leaks into the sac and kind of dyes his coat."

Fenway’s green fur has disappeared but Liam's love for the pup remains. "This is a ray of sunshine to land right in his lap," said Jeff McGourty, Liam’s father. In January, a pup was born in Asheville, North Carolina who was named Hulk because of its green fur at birth.