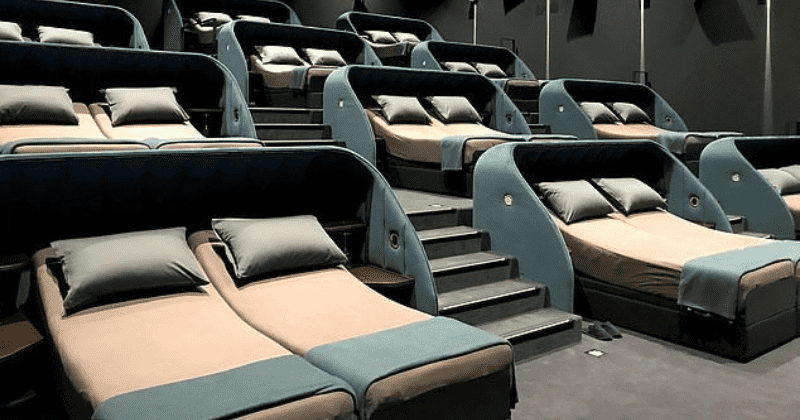 Reclining seats at the movies are so passe. A movie theatre in Switzerland has installed double beds to make the viewing experience of cinema lovers that much more comfortable and cozy. But aren't they worried about people getting too touchy and adventurous during the course of the movie? Their answer - it's a concept that has been tested internationally and is sure to attract a crowd that is used to binging on serials and sitcoms on Netflix or Amazon Prime from within the comfort of their homes and in their couches and beds. Plus, the hall's management have said that the highest standards of hygiene are something that they will strictly follow. The management will change the sheets after every show. Hope that's assuring to moviegoers at this hall. Although we do have many questions - is the hall and double bed meant strictly for couples? How can people who are not seeing each other say like say your office colleagues be comfortable 'in bed' together while watching whatever that will be played on the screen? Called the VIP Bedroom, the screen opened on Thursday inside the Cinema Pathé in the Swiss municipality of Spreitenbach, located in the northwesterly part of the country near the Swiss-German border. In an age when going out for a movie is becoming less popular with the emergence of streaming services, the hall wants to show people that they can provide more.

And when will this happen in America?

One just has to wait and watch to see if this hall can compete with the state-of-the-art providers of modern day entertainment. Venanzio Di Bacco, CEO of Pathé Switzerland, spoke to a local news website 20 minutes and stressed on the hygiene bit about the venture. He once again emphasized that that sheets will be changed between every single film and that the design was tried and tested.  He said, "The hygiene aspect is very important to us. The offer is unique in Switzerland. But we tested the concept abroad and had no problems so far."

Look! It's the answer to that question nobody ever asked! 😁

Cinema Pathé in Switzerland has opened a "VIP Bedroom" screen complete with double beds, free food, and a nightstand instead of seats. Yes, this is real.https://t.co/0wTfvxYH9B

There are a total of eleven double beds in the VIP Bedroom screen and each has headrests that can be adjusted to one's comfort, electronically. The price of each ticket is around 49 francs ($48.65). The charge will also include food and drink. However, for those who prefer to not eat during the movie and want the regular tickets, prices are just 19.50 francs ($19.36).  Cinema Pathé's VIP area also includes a 350-capacity Imax cinema and a theatre with single and double sofas.  People had a lot to say about the movie hall. One person on Twitter, Shelly said she would prefer sleeping.

The person wrote: I'd be snoring like a banshee.  For another person with the Twitter handle J.R.S, it did not seem like a very great idea. He commented: Theaters are mad dirty, so I am a hard no. Another person though this was a bad idea. Twitter handle Stir Mudgeon‏ wrote in the same vein: Ok this is #stupid and #gross on so many levels. Another person named Kobeissi on Twitter panned the idea as "awful." He wrote: What an awful idea. Now you can spread #bedbugs and disease quicker. Also, nothing will happen under the covers, right? Nothing? Others like Kevin Corke‏ , however, thought it was a rather good idea. He wrote on Twitter: As a frequent moviegoer, I vote yes on this!! Another person with the Twitter handle Jo Ro said he liked the idea. But then he wrote: I will do this, but then probably sleep thru the movie.