While many argued that a kink should not have been displayed in public, others said there was nothing wrong done. 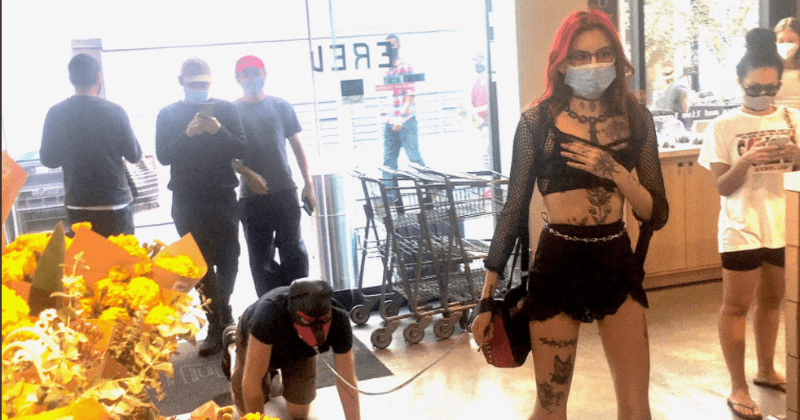 A domme at a supermarket in Erwohn, California became the center of attention after she was spotted leading a man on a leash who was on all fours, on Sunday. The scene left a number of shoppers surprised and shocked. One picture of the spectacle was taken by a friend of Paul Tao, a co-owner of the record label IAmSound. He had been at the shop and sent the picture of Tao, who then tweeted the picture. And it just blew up from there.

As of Wednesday afternoon, Tao's post had received more than 8,000 retweets, over 100,000 likes, and thousands of comments, some harsh, others cautious. One user commented on Tao's post:  Kink is beautiful & consensual. The slave is very happy to be attending his mistress there as that is the relationship they have. No live sex act is taking place.

He added: If someone brings their 200 pound pit into Starbucks, no one says anything as they have no right. No difference here. Another commentator wrote: Public humiliation is great and all, but we gotta talk about... You know, maybe not doing this in public spaces because not everyone is consenting to being part of the scene that you brought to the store. According to the interview conducted by Daily Dot, she is Mistress Lark, a 21-year-old musician, illustrator, and sex worker, who began working as a professional domme at the age of 18. Lark found "working in sex dungeons" as a way to find shelter after being sexually abused by a family member and left homeless as a 17-year-old.

It raises interesting questions of consent. Easy to come up with rules that seem to fit this one scenario. Think of all scenarios that are generally accepted - or not - it gets quite complex. 1/8

"I had a few encounters with sex work underage. It was something I wasn’t hesitant to do. I came across an ad for a dungeon on craigslist, and they said if you qualified you can live there as well. So that’s where the journey began,” Lark told the publication. One of the services she offers is “standard femdom kinks” and probably one of her clients was the man on the leash at the supermarket. Speaking about the viral photo, Lark said that she had just stepped into the Erewhon supermarket to get a drink with her submissive. “I just wanted some juice. I was out with my sub and my friends shooting some videos and just doing shopping," she said. She added, "We stopped in Erewhon. Lots of cameras and attention, but the security let us through valet and let us check out our pricey basket before finally asking us to leave.”

I don’t “consent” to see straight people make out on the subway but it doesn’t matter because I don’t get to police other people’s behaviour that doesn’t actually involve me.

The store and its staff were, however, very respectful. “They said ‘we respect what you are trying to do, but we are going to have to ask you to leave. The funny part was that we did have to walk back through the store in order to get the car out of valet. […] The security guards followed us out lol but the valet did still give us our free water!" With a photo such as this, there is every chance that lots of rumors and false information also gets spread. This is what exactly happened with claims that Lark had whipped the submissive as highlighted by a picture of a text message posted by Tao in a later tweet. Another person claimed she “sat on the patio and fed him out of a dog bowl” before whipping him “with a crazy belt.”

I don't see what the big deal is. There's no sex act involved. If my son asked me why they were doing that I would say "They're just playing. Sometimes grownups in a relationship like to dress up and pretend to be other people or even animals." There's a lot worse to be seen.

Addressing this, Lark said, "Didn’t have a dog bowl yet. We bought one after. I did paddle him. No more than twice though. He tried to touch my leg too high up my thigh and I didn’t like it. There weren’t any children nearby or anything.” Lark highlighted that the pandemic had led to a severe reduction in the number of clients. She also has to be careful about following protocols like wearing masks even during a public play. She also said most of her clients have been tested for the virus.