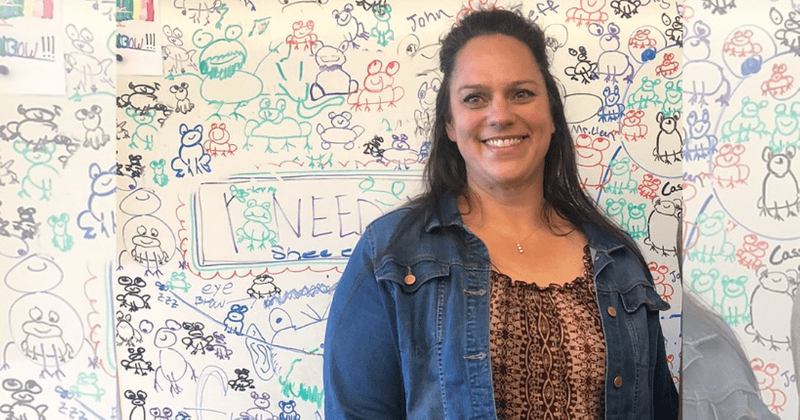 Trigger Warning: The story has details of a shooting that some readers will find disturbing

A sixth-grade girl opened fire at her Idaho school wounding three as earlier reported. When she started shooting, a teacher managed to disarm her and held her down till cops arrived. Now, the teacher is speaking out about what took place that fateful day. Krista Gneiting, a math teacher at Rigby Middle School, has been hailed a hero for her brave and compassionate action. In an interview with Good Morning America, she recalled hearing the sounds of gunshots coming from the hall on the morning of May 6 as she was preparing her students for the final exams. She went outside to find the school's janitor lying down wounded at the end of the hallway.  She closed the door when she heard two more gunshots.

Teacher Krista Gneiting speaks about the Rigby Middle School shooting in this interview featured on Good Morning America. This is an incredibly moving conversation with the heroic teacher who disarmed the school shooter; listen here:https://t.co/5mea0GrgRs

She recounted: "So I just told my students, 'We are going to leave, we're going to run to the high school, you're going to run hard, you're not going to look back and now is the time to get up and go." Besides the janitor, two other students were also wounded in the firing. All of them are expected to make a full recovery. Gneiting was helping one of them who was shot when she saw the shooter. "It was a little girl and my brain couldn't quite grasp that. I just knew when I saw that gun, I had to get the gun," she said. Gneiting then asked the girl, "'Are you the shooter?' I just walked up to her and I put my hand over her hand, I just slowly pulled the gun out of her hand and she allowed me to.  She didn't give it to me but she didn't fight. And then after I got the gun, I just pulled her into a hug because I thought, this little girl has a mom somewhere that doesn't realize she's having a breakdown and she's hurting people."

“It was a little girl, and my brain couldn’t quite grasp that,” teacher Krista Gneiting said. “I just knew when I saw that gun, I had to get the gun.” https://t.co/0yPba1tval

As she held her in her arms, the teacher called 911 and waited with her till they arrived. Slowly, the little girl opened up.  Gneiting said, "After a while, the girl started talking to me and I could tell she was very unhappy. I just kept hugging her and loving her and trying to let her know that we're going to get through this together. I do believe that my being there helped her because she calmed down." When an officer arrived, the teacher explained that she needed to be put in handcuffs.  "She didn't respond, she just let him. He was very gentle and very kind, and he just went ahead and took her and put her in the police car," Gneiting said.

I was able to thank Krista Gneiting on behalf of all Idahoans today. Gneiting disarmed a student during a shooting, directed children to safety, and attended to those wounded. Words cannot describe the effects her heroism on that day, and every day in her classroom (1/2) pic.twitter.com/CmK8KXZ4Ym

The teacher hopes that people can be compassionate enough to forgive the little girl despite the seriousness of her actions and that she required a lot of support. "She is just barely starting in life and she just needs some help. Everybody makes mistakes. I think we need to make sure we get her help and get her back into where she loves herself so that she can function in society," she said. The office of the Jefferson County Prosecuting Attorney said the girl was "still in custody and has been charged." She could face three counts of attempted murder. Her name was not released. Gneiting's brother-in-law, Layne Gneiting, called her "a baller" on a post on his Facebook page. In another post, he called her a "born-mother" and added: Mess with her kids she’ll rip you apart. Need a hug she’ll hold you for hours, mingling her tears with yours.

He added: I naively believed the mother bear had raged into action. Not so. Determination pushed her to act, but tenderness and motherly love—not force—lifted the gun from the girl’s hand to hers. Brad Little, the Idaho governor, also paid the math teacher a visit and "thanked" her for her action.