Retired Captain Tom Moore wanted to give back to the NHS for helping him recover from cancer and a broken hip bone injury. 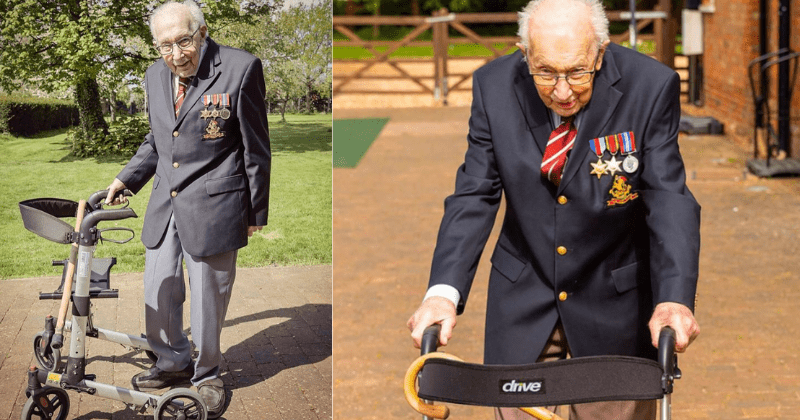 A 99-year-old former British Army soldier has raised over £12.5 million ($15.6 million)  for the National Health Service (NHS)  by merely walking in his garden. What started as a simple fundraising effort by retired captain Tom Moore and with a much smaller goal initially in mind, but it soon turned into something much more. There are now calls for him to even be knighted.  Moore decided to give something back to the NHS for taking care of him and helping him recover from cancer and a broken hip. The elderly gentleman first aimed to walk with the help of his walker in his garden to raise £1,000 (1,248.35 United States Dollar) for the for NHS Charities Together. He thought only people from his village in Bedfordshire would contribute money but it soon ballooned into a national fundraising effort. Moore had to continuously hike up his target amount because he was achieving all of these with ease and now he has collected millions.

Now, Moore has vowed to walk the length of the garden at his home in Marston Moretaine, Beds, 100 times before his 100th birthday on April 30 and continue to raise money for the organization. Speaking with Reuters, Moore said, "The more it (money) comes in the better because when I was in hospital with my hip and then with my head, the service I got ... was absolutely unbelievable. At all times they were so good, so cheerful, so friendly."

Take a moment and read these words to your self i have actually cried about what @captaintommoore has done during these hard times! 9 million pound raised #NHSheroes #NHS 🇬🇧🇬🇧🇬🇧 pic.twitter.com/Q8WlwdnFiJ

Moore is someone who has always been very positive. "That’s the way I think I’ve always looked at things: tomorrow will be a good day," he said whilst adding, "I shall continue up and down here after my birthday. I’ll keep on going whilst people are still contributing to the National Health Service." According to Metro, the fundraising was set up by his daughter Hannah Ingram-Moore. The target was raised from £1,000 to £100,000 in no time. Then when this was surpassed it was further set at £250,000 and £500,000. "We are overwhelmed by the response. It’s extraordinary. We remain proud and humbled by the generosity of the British public," she wrote on Twitter. The BBC reports that Moore's feat was described by NHS Charities Together, as one that has "truly inspired" and left them "humbled."

I’m Captain Tom Moore, war veteran, 99 years of age (soon to be 100) and I’m walking for the NHS to raise money for our heroes.https://t.co/M1dkvoV3kE

Since the charity was set up last week, around 170,000 people from across the world have donated to the cause. "When you think of who it is all for - all those brave and super doctors and nurses we have got - I think they deserve every penny, and I hope we get some more for them too," said the World War II veteran. Born in Keighley, West Yorkshire, Moore trained as a civil engineer before joining the army. He has also served in India and Burma. Moore said he has been practicing completing the 100 laps. "I do (laps) each day so that eventually I'll get to 100, then after that, I shall continue and do some more," noting that the support he has received has been "absolutely fabulous."  Moore further said, "Let's all carry on and remember that things will get better.  We have had problems before - we have overcome them - and we shall all overcome the same thing again."

Ellie Orton, chief executive of the NHS Charities Together said, "I think I absolutely join the rest of the country in being truly inspired and profoundly humbled by Captain Tom and what he has achieved. Thank you for being an inspiration and a role model."